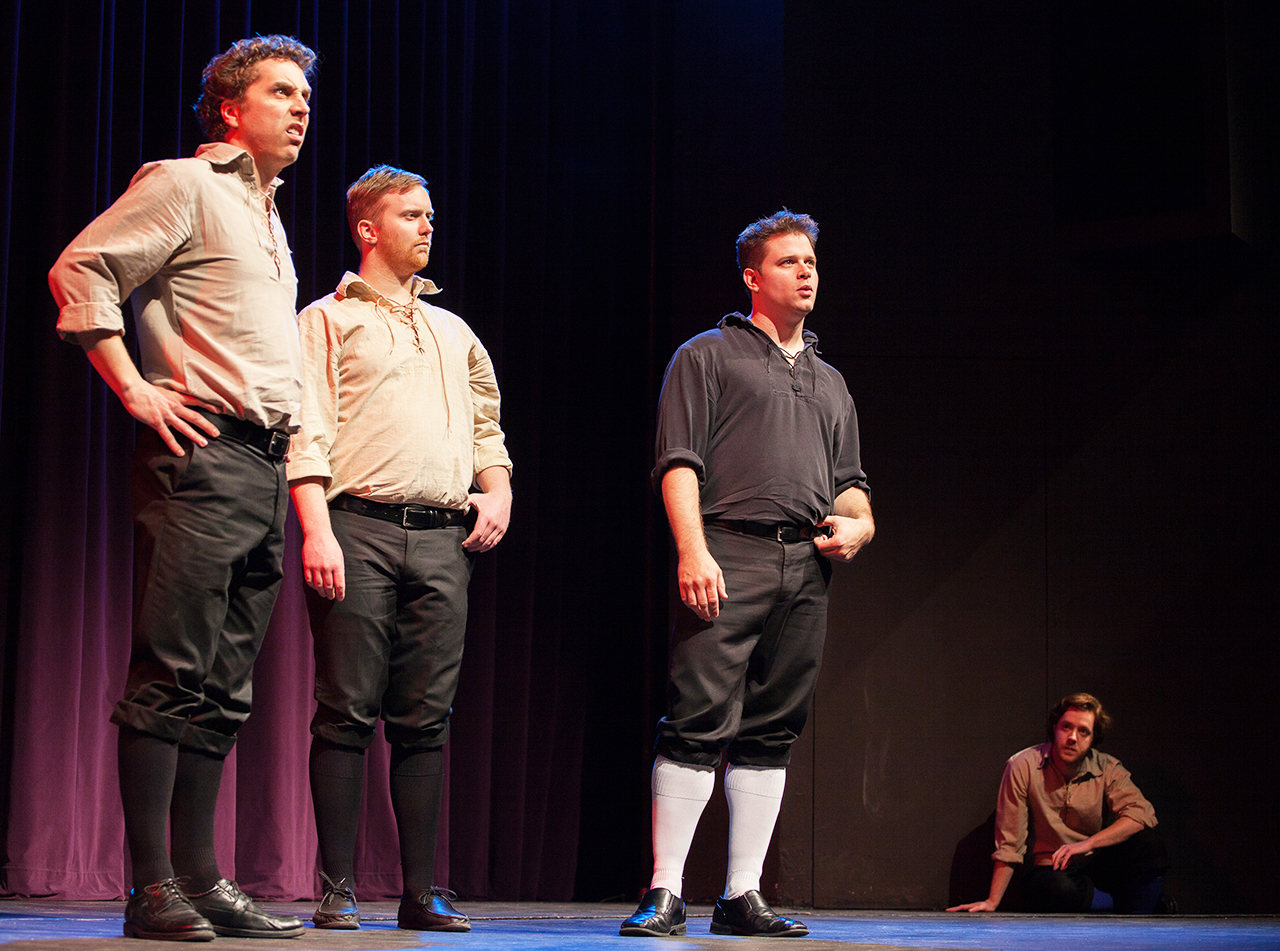 Imagine a troupe of five actors performing a completely original Shakespearean play without ever having rehearsed it beforehand. Sounds impossible, right? Wrong.

Five members of The Improvised Shakespeare Company – founded in 2005 and based in Chicago – visited Concordia on January 17, led an improv workshop for students and gave a spirited live performance to the general public.

The critically acclaimed company has been performing sold-out shows at the iO Chicago Theatre for seven years and continues to impress audiences across the country touring a variety of colleges, universities and performance venues to showcase their sharp talent for hilarious Elizabethan comedy and intelligently improvised rhyme schemes.

The company never performs the same show twice. Joey Bland, Brendan Dowling, Andrew Knox, Josh Logan and Tim Stoltenberg entered the Frances Frazier Comstock Theatre without any preconceived ideas about the play they were about to premiere.

Queued by a title pegged by a willing audience member, “Canada’s Maple Syrup Day” was written and performed on the spot in front of a house full of Concordia students and faculty and members of the community.

The company, composed solely of men, portrayed multiple different characters throughout the performance despite gender, age, and dialect, making a cast of five actors feel like a cast of at least twenty.

Hilarious debauchery ensued as Cassius and Ontario debated using love potions to woo their partners while dealing with occasional setbacks from a foolish French anti-hero who was out to steal their lovers and take over Canada in the process.

Just when the storyline might actually spin out of logical sequence and into bedeviled disaster, the actors carried the plot back to a place of coherence, keeping the audience amazed and entertained by their sharp satirical comedy, complete with innuendos, popular pop culture references and even the occasional song and dance.

“Everyone has exposure to it,” a long-standing member of the company, Joey Bland said. “(The audience) knows what you’re portraying because Shakespeare is so interknit with popular culture.”

Bland, a graduate of the College of William and Mary in Virginia, has been working with The Improvised Shakespeare Company for the past eight years and has been doing improv for 14.

Bland said the audience is a big factor in what draws him to do improv.
“Every time the audience is surprised, we’re surprised,” Bland said. “Everyone feels like they’re a part of the show. You’re constantly having realizations.”

Some members of the company recently performed with celebrated actor, Patrick Stewart, best known for his work in Star Trek and with the Royal Shakespeare Company, which is based out of Stratford-Upon-Avon, the birthplace of William Shakespeare, himself.

As expected with any Shakespearean show, the finale was full of bloodshed, drama and laments of true love, as Bland tied the plot together with a final rollicking epilogue.

On a similar note, Concordia’s theater department will be performing one of Shakespeare’s well-known comedies, “Much Ado About Nothing,” this spring.

Interested In More Improv? Here are some great locations:

This story was written by Alicia Auch, contributing writer.