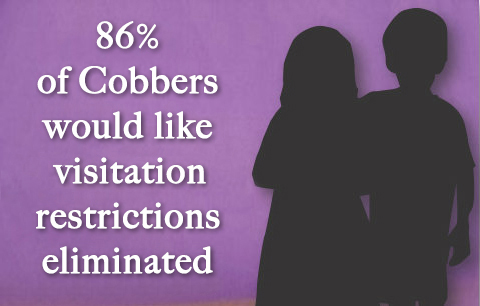 Concordia will no longer uphold visitation restrictions in dorms on campus effective the 2014-2015 academic year.

On Tuesday, Jan. 21, Student Government Association announced in an open forum that the change was approved.

“We are excited to announce that intervisitation policies will be changed completely,” SGA President Levi Bachmeier said. “Visitation restrictions will be eliminated.”

The current intervisitation policies will remain in effect until the end of this semester.

In addition to this change, SGA is currently proposing to make Concordia’s campus partially or completely tobacco-free.

The new policy regarding visitation and the tobacco-free proposal come out of overwhelming support from the student body.

According to the results of a survey asking students about intervisitation, 86 percent of respondents said they would prefer living on campus without visitation restrictions and 75 percent said it would improve their college experience.

Anti-intervisitation sentiments were prevalent among Concordia students even before the survey was distributed.

“There have always been a group of students who have wanted to eliminate the policy,” Residence Life Director Jasi O’Connor said.

The elimination of intervisitation is a far cry from Concordia’s dorm policies when the college was founded. At that time, a men could not be in women’s dorms, and vice versa, except for on Sunday afternoons.

O’Connor said that she was not surprised by the results from the survey given the way society has changed over time.

“I think students have grown up now being in such close contact with peers,” she said.

The end of intervisitation has been a long time coming with changes being made, some big and some small, over the years.

During his sophomore year, Student Services Commissioner Calvin Ziegler worked as a class representative to present a proposal that would eliminate intervisitation in Brown Hall.

The change went into effect this year. O’Connor said the reasoning behind the change was that Brown Hall rarely houses first-year students and the dorms themselves are more conducive to entertaining.

She added that the change has been successful as was the elimination of intervisitation in campus apartments in 2009.

“(Students) certainly were ready to have that freedom,” she said.

SGA Vice President Matt Dymoke said that students who wish to have intervisitation policies will have the opportunity to live on a floor with restrictions.

As first-year students apply for housing on campus, they will be able to express their preference regarding visitation restrictions, O’Connor added.

Floors will be made based on those responses, and returning students who wish to live on a floor with intervisitation will be given a list of their options before they apply for housing.

O’Connor said although the change is a step in the right direction, it might cause more issues between roommates. Intervisitation has helped students avoid difficult confrontations in the past.

“Now you don’t have the ability to lean on the policy,” she said.

Concordia may be tobacco-free in near future

With a proposal drafted by SSC in response to students’ feedback regarding tobacco use, SGA is proposing to make Concordia a partially or completely tobacco-free campus.

Results from a survey distributed by SSC last semester showed that the majority of students are in favor of policy that would ban tobacco on campus.

Out of 1,043 respondents, only 12 percent reported using tobacco products on a regular basis, and 70 percent of the participants supported Concordia becoming a tobacco-free campus.

Ziegler said that another factor motivating the school to implement a policy banning tobacco is that Concordia’s neighboring colleges have similar policies in effect. Both North Dakota State University and Minnesota State University-Moorhead have policies in place that prohibit tobacco products on their campuses.

Unlike the intervisitation policy change, the proposal regarding tobacco use on campus is still being considered by student leaders and administrators, Ziegler said.

Because the survey reported a small number of students using tobacco products, the proposal to make Concordia tobacco-free would, in theory, affect the least amount of people, Ziegler said. There is also discussion of having designated smoking areas around campus.

“It’s a very small amount of students on our campus using the products,” he said. “Ultimately, we feel it would be in the best interest for the school to go in that direction.”