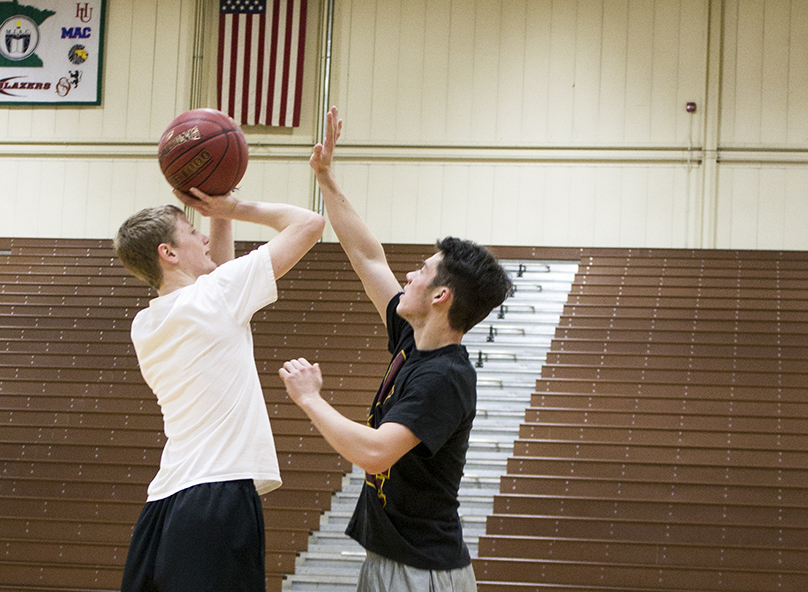 Cobbers get creative with team names

Intramural basketball at Concordia is underway. Men’s and women’s basketball began last week with games being played in Olson Forum and Memorial Auditorium on Monday through Thursday nights.

Students can form their own teams and create their own team names, and many have gotten very creative in doing so. Women have their own league with games on Monday and Wednesday nights, and the men have different levels of competition available with leagues A, B and C, league A being the most competitive.

Freshman Austin Hawkins, who plays on the Cobber men’s basketball team, officiates games on Monday nights. Austin is certified to officiate high school basketball games in his home state of Wisconsin and has spent past summers officiating Amateur Athletic Union, or AAU, basketball games as well.

“These intramural leagues are much more laid back,” said Hawkins. He also mentioned there are some extremely talented players, and they can be very competitive.

Freshman Tricia Tauer decided over the Christmas break to form a team. She texted some of her friends and was able to convince eight to join her team. “I decided to play because I had played for three years in high school,” Tauer said. “This gives me the chance to play without having the commitment of varsity basketball.”

Most of Tauer’s team has never played basketball before, so there is a mix of excitement and nervousness for some. Meanwhile, Tricia demonstrated her sense of creativity with her team name, “The Wreckingballers.”

Sophomore soccer player, Sadie Hayes, joined a team with some of her soccer teammates so she could spend some time with them as well as getting a quality workout. Hayes’ team name is the “Blurred Sidelines.” She said her team has around nine players, some of whom who played basketball in high school but most of whom have not.

“We’re in great shape, so running the ball will be our strategy,” Hayes said. “We’re not amazing, technically, because we’re used to having the ball at our feet.”