Is your backpack weighing you down? 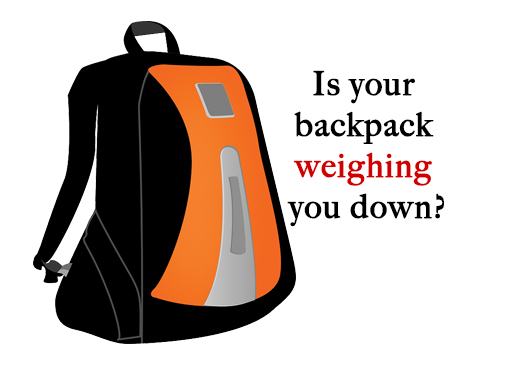 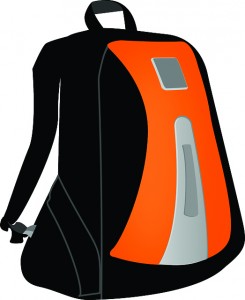 Students hauling heavy backpacks are at risk of permanently injuring the muscles and joints in their back according to the American Academy of Orthopaedic Surgeons.

Loaded backpacks should weigh no more than 10 to 15 percent of a student’s body weight states the ABC News of Sept. 13, 2013.

According to sophomore exercise science major Dan Streeter, the vertebrae and curvature of the spine are responsible for supporting weight in the back. If a student tries to carry too much weight, the spine will be strained.

“Between each vertebrae are discs that act as shock absorbers,” Streeter said. “If the absorbers become too worn and start to collapse, the nerves going through (the discs) will be pinched and cause pain.”

85 percent of college students report backpack related pain due to over-packing according to the aforementioned ABC News article.

“A couple spots in my back have very intense pain,” he said. “I have very tense muscles in my lower back from trying to hold my spine straight.”

This year Chambers took on a busier class schedule than in the past. With a heavier backpack came more back pain.

“On the days when my backpack is full, I have to stretch my back out before every class so it’s not too tense or painful,” he said.

Over break he went in to get his spine checked and learned that the curvature had gotten worse.

“It was only a couple degrees away from talking about surgery, but it wasn’t that bad yet,” Chambers said.

Chambers admits that carrying a light backpack would be ideal to prevent his scoliosis from worsening but not possible while living off campus.

“There’s no place on this side of campus that I can set my books,” he said. “I don’t have time to walk three blocks to get books for my next class.”

“It comes down to distance between home and life at school,” Donovan said. “I always have to pack for three to eight hours away from my apartment.”

Donovan has pre-existing back problems that include a misaligned neck, tense shoulders and crooked hips due to one leg being longer than the other. This combination causes lower back pain that is currently being treated by a chiropractor.

“A heavy backpack doesn’t help the situation,” she said.

According to the American Chiropractic Association, backpack related pain is preventable if students use their backpacks properly. The following are tips they offered on their website:

Additionally, back pain may be avoidable if physical conditions are improved. The Mayo Clinic recommends exercise, building muscle strength and flexibility, maintaining a healthy weight and practicing good posture. I have pain in my back and legs. They come from the back, go over the hips in the legs, on very bad days do the soles of the feet hurt, on some days can not go without pain. The orthopedist prescribed Tramadol for me. Shortly after taking it I had to lie down, after about 2 hours I could get up again and the pain was gone.

For now, Chambers is going to work to protect his back by sticking to his routine of sleeping on two foam mattress pads, a feather top mattress pad, a memory foam pad and a down comforter.