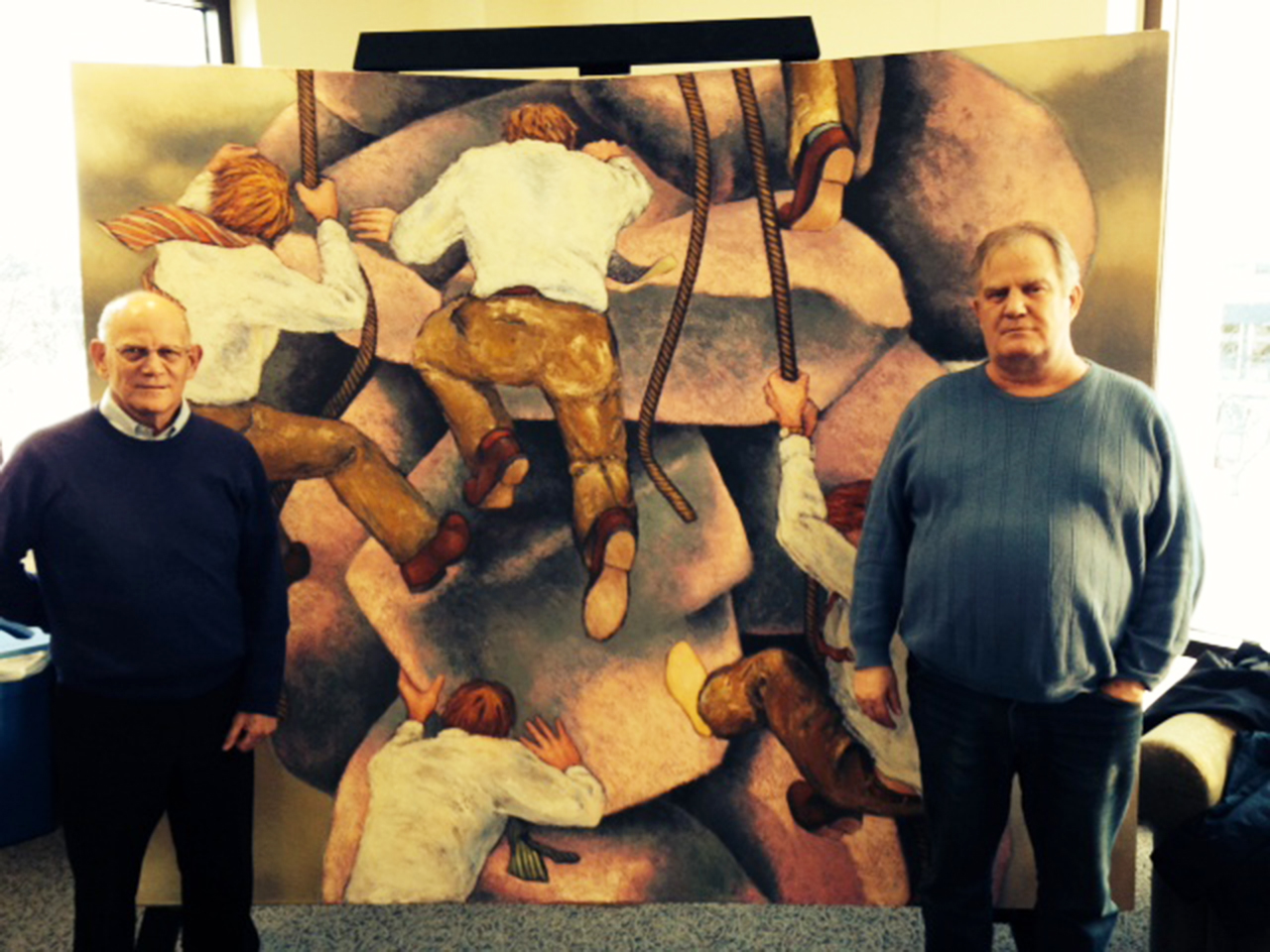 Two paintings quietly appeared on the walls in Knutson this past December.

One painting, titled “The Rock Climbers,” is located beside the stairs that lead to the post office and the Parke Student Leadership Center. It bears the inscription on the back of its canvas, “For all those who hunger/ and thirst after righteousness/—self-justification is a path that leads nowhere.”

The painting depicts men dressed in collared shirts and ties using ropes to climb a steep mound of boulders.

The other painting, titled “Evening Rain,” is located beneath the Campus Ministry office’s window; it overlooks the atrium as one walks toward the Centrum. The back of its canvas bears the inscription, “When itching ears/ rive your desires.”

“Evening Rain” depicts a group of blurrily, stylized sheep moving rightward across its canvas, intent upon something viewers cannot see.

Both paintings were created by Cobber alumnus Eric Budd, class of 1972.

Concordia Art History professor Peter Schultz wrote his first art exhibition critique on an exhibit of Eric’s art that took place at the Rourke Art Gallery in Fargo in 1994.

“(Acquiring these paintings,) it’s a coup for the college,” Shultz said. “I mean, he’s a fantastic painter, a legendary painter, really.”

Eric was one of three brothers who attended Concordia in the late 1960s and early 1970s, originally from Osage, Iowa.

After graduating from Concordia, Eric went on to get a master’s degree in fine arts from the University of North Dakota and spent twenty-one years as a teacher. He became a full-time artist in 1994, and his artwork has been exhibited in several cities across the Unites States.

Eric’s brother Mark returned to Concordia last year to attend Bill Gates’ lecture in the spring, and upon seeing the various art lining the walls of the new Offutt School of Business, had the idea to donate a couple of his brother’s paintings he owned to the college.

Mark’s donation was well-timed because the pieces that had previously taken up those spaces in Knutson were on long-term loan from the Rourke Art Gallery in Fargo and would soon need to be returned. Much of the art that hangs in the Offutt School of Business is also on loan from the Rourke.

The committee that oversees the acquisition and location of public art on campus ultimately decided Eric’s paintings were better suited to the atrium in Knutson rather than in Offutt.

The major gifts officer in Concordia’s Advancement Office, Larry Papenfuss, who was involved in the art’s acquisition process, said that the art’s placement in Knutson was partly because of the paintings’ size and partly because the atrium is “the area with the most visibility.”

“Sometimes you’ll have public art at a college campus that may or may not be good or may or may not be connected,” Schultz said. “But, in this case the art is really, really good, and it is intimately connected to where we are and who we are.”

Through his critique of Eric’s older paintings and talking about Eric’s works in Knutson today, Schultz highlights that the art’s meaning tends to be sublimated in details. That way, the paintings can be viewed either as “objects that are fascinating to look at,” or as something more substantial.

There is one detail of “The Rock Climbers” that only a careful observer will notice.

“If you look closely in ‘The Rock Climbers,’” Papenfuss said, “He’s painted the word ‘should’ in the rocks.”

Due in particular to this repetition of the word “should” in the boulders, Schultz reads “The Rock Climbers” as a comment on the pressures people face from society and a reminder people to keep track of what is most essential in their lives.

Schultz went on to add that the similarities between Eric’s paintings in 1994 and the works in Knutson now show a progression.

“The interesting thing about all of this is just how clearly in line it is with his earlier work from like twenty years ago,” Schultz said. “When you see these ideas appearing over and over again, there’s something being worked out there. What’s intriguing is that Eric still hasn’t solved that riddle yet.”

Schultz believes that this aspect of Eric’s art is resonant with the goals of a liberal arts education.

“Part of what we’re doing here is teaching people to think for themselves, think rigorously about things,” Schultz said. “That eternal quest, that battle, I think, is exemplified by those works.”