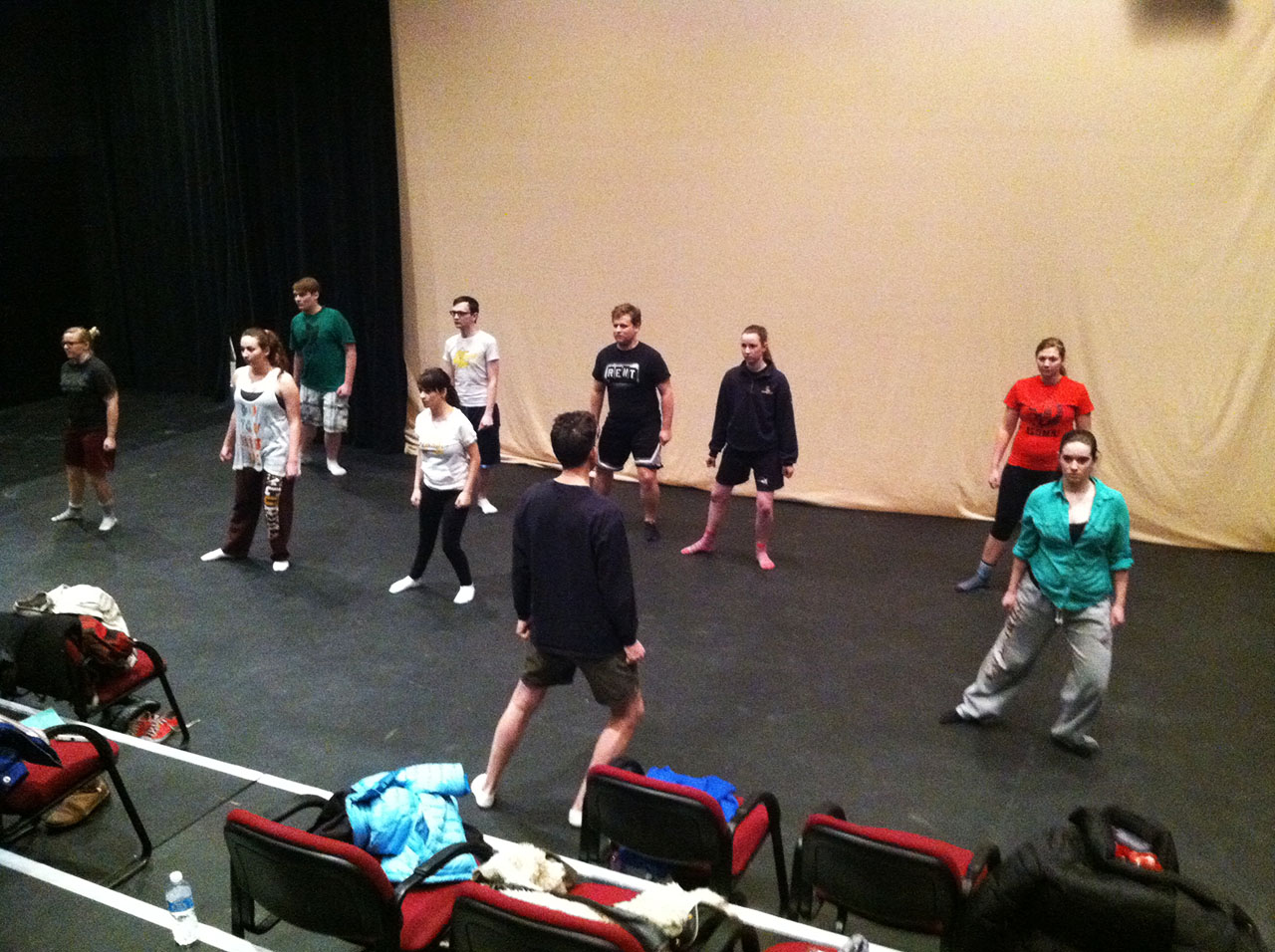 Marching in single line across the stage with knees bent and arms held out, nine students stay straight-faced and focused on their movements. Some might even be sweating. This is not a typical play rehearsal.

Tadashi Suzuki claims “acting is the art of stillness,” and stillness in between movement is what makes a play more interesting. Director David Wintersteen has been hooked on the Suzuki Method for some time, but this is the first play where he has put it to the test.

“This show calls for a very distinct kind of stillness,” Wintersteen said.

“The Long Christmas Ride Home,” premiering in New York, N.Y. back in 2003, uses puppets in the show. This makes for an extra challenge for the actors, most of whom have never done puppetry before.

The puppets are not ordinary hand puppets or marionette dolls either – they are bunraku puppets. Bunraku is an ancient form of Japanese puppetry that takes decades to master.

Junior Anna Larranaga, who plays Claire and animates her puppet in the show, explains that most bunraku puppets are handled by three people.

“First they train for ten years on the feet … then ten years on just the left hand … then you can move to the right hand and the body,” Larranaga said.

“The Long Christmas Ride Home” Americanizes the use of bunraku puppets, and Wintersteen has reduced the use down to just two puppeteers per puppet with no one working the feet.

Wintersteen explains that Tadashi Suzuki calls Americans the laziest actors in the world.

“We aren’t bunraku puppeteers,” Larranaga said. “We are just honoring the tradition.”

Anna controls Claire’s right hand and body for most of the show. In order to understand this kind of control for body part on a puppet, the actors train, much like a sports team, using the Suzuki Method.

There are marching exercises as well as standing and sitting exercises to help get the actors in shape. “Basic 1” and “Basic 2” have actors holding positions similar to what is seen in barre ballet. These exercises also include some speaking in unison.

“I was sore for days,” Larranaga said of the first time the group practiced Suzuki.

Suzuki has benefits for actors without puppets as well.

Sophomore Andrew Rudd, who plays multiple human acting roles in the show, says the Suzuki Method has helped him to continue improving his acting skills.

“It’s something you can’t perfect,” Rudd said. “There is no perfect form, and you can’t just be done.”

Rudd plays a dancer for one of his roles in the show. At the beginning of rehearsals, he said his body was out of shape, and he was worried about his dancing skills.

Since practicing the Suzuki Method for about an hour at the beginning of every rehearsal, Rudd has noticed he has more control, his legs are in shape, and he is a better dancer.

Larranaga spends a lot of time exploring body language because that is what a lot of her role calls for.

“I spend 75 percent of the show not speaking,” Larranaga said.

She has noticed how much stronger she is and says her ability to focus has improved.

These actors, who are figuring out how to control these puppets for the first time, must struggle through movements that would seem basic for most humans such as putting on a hat. This movement must be coordinated between two people controlling a puppet with stiff hands and no capability to grasp the hat.

Sometimes, the puppet is just controlled by one actor as it moves across the stage to interact with another character. The use of the left hand is now gone, and the puppeteer must rely on their own body movement to help convey the mood.

Wintersteen calls out “use your Suzuki,” often during difficult moments. The Suzuki helps to make every movement clear and consistent to the audience.

Along with the use of bunraku puppets and a new training method, actors in “The Long Christmas Ride Home” use shadow puppets to convey certain scenes. Larranaga calls this a mixed media show with “a lot of new territory.”

The show itself is about a family of five going to visit their grandparents over the Christmas holiday, but it is not meant to be performed around the holidays.

“It’s about a family falling apart at the seams,” Wintersteen said.

The show contains explicit sexual material, strong language and adult themes. It is not recommended for children, but Wintersteen says adults will find the puppets interesting.

Rudd says the puppets take some getting used to, “but eventually, you forget they’re actually puppets,” he said. “It’s a really moving show.”

“The Long Christmas Ride Home” opens Feb. 11 and runs through Feb. 16 in Concordia’s lab theater. Tickets are being sold at the box office.