By: Meg Hanna
In: Blogs, Reviews
Tagged: frozen
With: 0 Comments 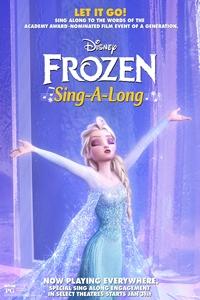 I’m sure almost everyone on campus has seen Disney’s Frozen by now, but did you know there is a Sing-Along version currently playing at Century Theater in Fargo?  I went to see the Frozen Sing-Along with my roommates over the weekend and had a blast.

The audience at the matinee showing I attending consisted of slightly self-conscious looking college-aged students and young children with their parents.  There was no in-between.  The little kids were a lot of fun because when it came to the actual singing along, they really went for it.  A couple of them also got really concerned during the sadder parts.  It was pretty adorable.  That being said, if little kids singing and making loud comments while you’re watching a movie would bother you, you should probably skip the sing-along.

This was my second time seeing Frozen.  If you can believe it, it gets better with multiple viewings.  Disney as a general rule is pretty good about foreshadowing, if you know what to look for, and Frozen was no exception.  During the very first song, “Frozen Heart” the lyrics specifically warn to “beware the frozen heart.”  If you are one of the maybe three people on campus who hasn’t seen Frozen yet, that is super relevant later.

This might be really obvious, but simply having the lyrics on the screen during the movie was great.  Since I haven’t memorized all the lyrics to every Frozen song yet, that helped me participate more fully in the sing-along.  On that note, being able to sing-along with the characters while watching a movie in the theater without getting strange looks was really nice.  If I was watching a Disney movie at home, I would normally sing along with the characters.  The sing-along aspect of the movie made watching it more fun because I didn’t feel like I had to censor myself because I was in public.

The singing along, though, was oddly a little nostalgic for me.  There was a bouncing snowflake following along with the lyrics just like in the old Saturday morning cartoons.  That was really cheesy, but I loved it all the same.  I had never been to a sing-along in theaters before, so seeing Frozen this way was a novel experience for me.  I don’t think I’d like to see a movie that way for the first time, but if it was a film I liked enough to see in theaters twice I would definitely go to a sing-along version.