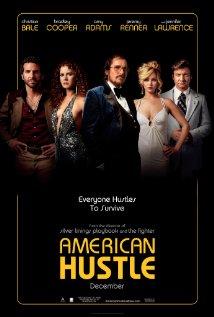 “Some of this actually happened.”  Thus intriguingly opens American Hustle, nominated for 10 Academy Awards this year, including Best Picture.  An amazingly complex film, the plot revolves around Irving Rosenfeld (Christian Bale), a con-man who finds himself, along with his business partner/mistress Sydney (Amy Adams) working with FBI agent Richie DiMaso (Bradley Cooper) in order to go after white-collar criminals in New Jersey.  However, they appear to bite off more than they can chew while trying to take down a corrupt but lovable mayor played by Jeremy Renner.  Their plan involves everything from bribing congressmen to conning mob bosses.  I won’t give away any details, but there is a huge twist at the end that left me thinking, “What just happened?”

This film is set in 1978, and everything from costumes to musical choices reflects that really well.  Irving wears wonderfully hideous suits, tinted aviator style glasses, and an awful toupee for the entirety of the film.  Jennifer Lawrence, playing Irving’s wife, has her hair piled on top of her head in a period-accurate twist which stole the show during one scene where she sings and dances to Paul McCartney’s “Live and Let Die” while cleaning the house.  That image was juxtaposed with Irving being interrogated by a member of the Mafia, which provided a really cool contrast.  Other popular songs featured in the soundtrack include “A Horse with No Name” by America, “Goodbye Yellow Brick Road” by Elton John, and “It’s De-Lovely” by Cole Porter.

The acting in this film was phenomenal.  There is a kind of love triangle that happens between Irving, Sydney, and Richie.  Remarkable, Amy Adams has great chemistry with both actors, but Bale really sells his role as a jealous lover in the secondary love triangle between Irving, Sydney and his wife Rosalyn (Lawrence).  I was just as intrigued by the character relationships as I was by the plot.  It is no wonder that Bale and Adams and Cooper and Lawrence are up for Best Actor/Actress in a Leading Role and Best Actor/Actress in a Supporting Role, respectively.

My only issue with this film is that I was confused by the timelines.  The first half hour of the film goes back and forth between “real time” and flashback frequently.  It becomes clear what happens when later in the film, but at the time it was a little confusing to keep events straight.  It is a complex film with a lot going on, and I’m sure I missed a couple of important points.  I would recommend watching the film at least twice to pick up on a few more details.  Other than that, though, I would highly recommend watching American Hustle or least see how it does at the Oscars.