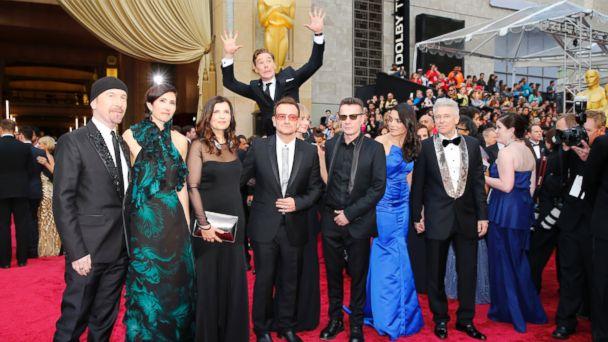 As you probably all know, the 86th Academy Awards took place last Sunday.  The awards were hosted by Ellen DeGeneres, her first time hosting the awards in seven years.  There were some really incredible movies nominated this year, with very few categories having obvious front-runners.  The film that ended up winning Best Picture was 12 Years a Slave (fulfilling a joke made by Ellen earlier in the evening: “Either 12 Years a Slave wins Best Picture or you’re all racists), but Gravity took home the most awards of the night, with 7 wins out of 10 nominations.  Comparatively, 12 Years a Slave and Dallas Buyers Club tied for second most wins, with 3 apiece.

With Ellen DeGeneres as the host, there were bound to be some shenanigans.  Ellen actually ordered pizza for the audience after asking Jennifer Lawrence whether she was hungry.  This enabled a great shot of Brad Pitt handing out napkins and paper plates to his fellow attendees.  And then there was the epic selfie featuring Ellen, Meryl Streep, Jennifer Lawrence, Kevin Spacey, Bradley Cooper, and many others.  This photo actually crashed Twitter for a few minutes, receiving over 3 million retweets.

Apart from Ellen’s general hilarity, there were several non-award related moments that managed to explode on the internet.  There was John Travolta butchering Idina Menzel’s name so badly that it sparked its own Travolta name generator (example: my name “Travoltified” is Mark Halla).  And then there was Benedict Cumberbatch photobombing U2, which was possibly one of the greatest moments of the night.  “Cumberbombing” – as it’s now being called online – caught on quickly, and now has its own BuzzFeed page.

All joking aside, there were a couple of really great, heartwarming moments during this year’s Oscars.  Lupita Nyong’o (12 Years a Slave) gave a really heartwarming, profound acceptance speech for her Best Supporting Actress win.  She thanked the spirit of the character she portrays in the film, a slave girl named Patsey, which was a really moving gesture.  Matthew McConaughey (Dallas Buyers Club), on the other hand, gave a speech that, in my opinion, made him sound a bit pretentious.  He basically said that he was his own hero, and made no mention of the HIV/AIDS victims that his film portrays.

Every year I make it my goal to watch every film nominated for Best Picture before the awards, and every year I fail spectacularly.  This year I only managed to watch one film up for Best Picture, and only five films that were nominated for anything.  Not surprisingly, my Oscar ballot finished at a whopping 9 out of 24.  If you played along, hopefully you did better!  Even so, this year’s Academy Awards were a blast to watch.  Whoever is asked to host next year will be hard pressed to follow Ellen’s performance.  If you missed anything, highlights can be found here.