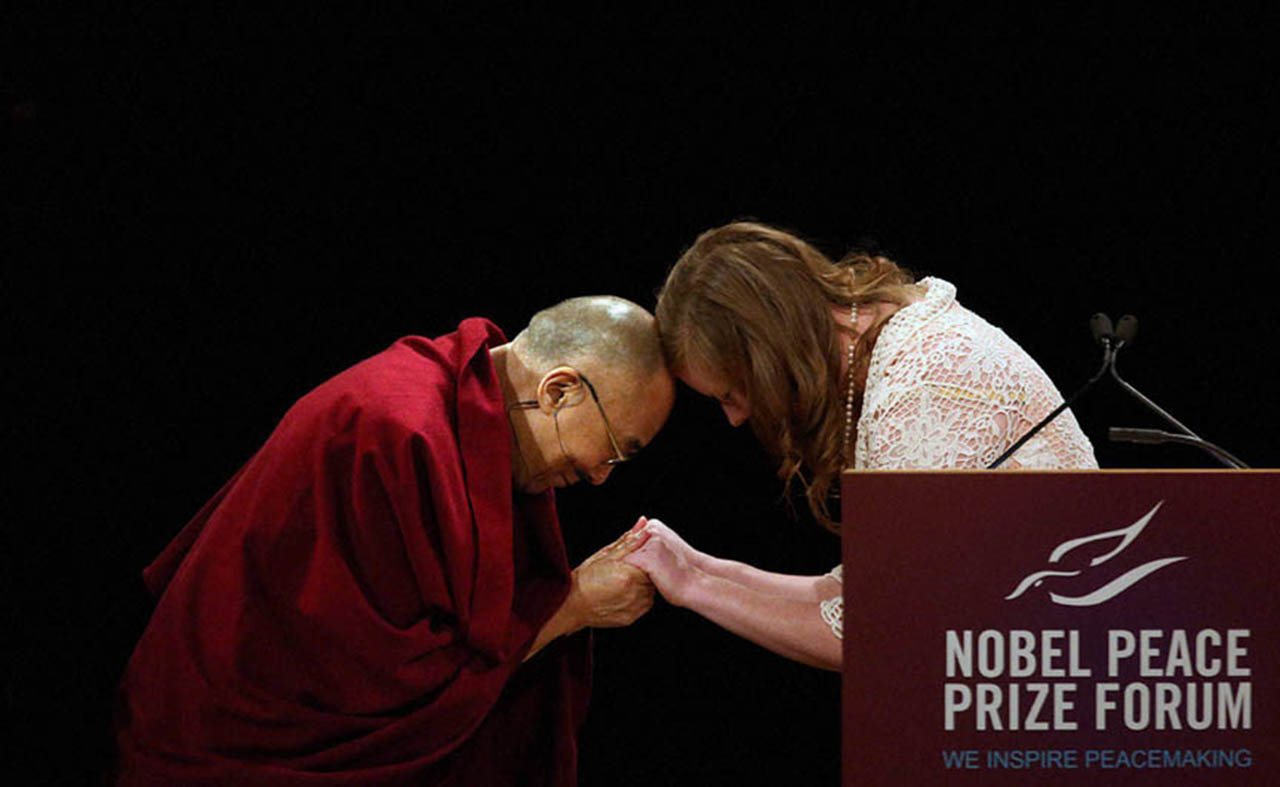 Moorhead, MN – Very few people can claim the Dalai Lama has snuck up on them.

Concordia senior Anastasia Young recently returned from a trip to the Peace Prize Forum in Minneapolis, where she introduced the Dalai Lama before he spoke. Young received an unexpected experience with His Holiness.

The Peace Prize Forum occurs annually at Augsburg College, designed to discuss the work of former Nobel Prize winners in an open forum. Concordia, along with five other Norwegian-American-based colleges, founded the program in 1989 and have sponsored the event ever since.

“Everything I never thought would happen, happened,” Young said, recalling her time on stage.

According to Young, she was to receive minimal attention from the Dalai Lama.

“‘You will not be shaking the Dalai Lama’s hand or having any interaction with him at this point,’” Young said, explaining the instructions given to her. “‘You will finish your introduction, clap and walk offstage.’”

Young said she felt relieved. She shares a joke between friends regarding the temperature of her hands.

“My hands are always cold. They’re like icicles,” Young said.

Despite those instructions, the Dalai Lama had a different agenda in mind.

“He had a huge entourage of people: eight-to-10 people herding him to get miked and get ready,” Young said. “He stopped, spread the people, came over and shook my hand. He just started laughing and said ‘Oh, your hands are so cold! It’s cold in Minnesota!’”

Later, Young was called on stage to introduce His Holiness with a two-minute speech. However, her attempt at a concise, straight-forward production was again thwarted.

According to Young, the Peace Prize Forum’s audience began to “buzz” shortly after she reached the podium. Against the wishes of his security personnel, the Dalai Lama meandered onstage.

She continued her speech – at the conclusion of her intro the Dalai Lama held out his hands. Young accepted them in her own and they bowed together, touching foreheads.

“[That moment] became a shared moment for everyone there” Young said. “Through our encounter, [he was able to] engage with the audience in a way that people could see him as a human. That moment was bigger than the two of us – it was one that was so inclusive for everyone through the laughter and surprise.”

Near the end of the forum, Young presented a scarf to His Holiness. After blessing the scarf, he gave it back, a typical Dalai Lama process.

Young explained the journey leading to her time with His Holiness.

“I came to Concordia thinking I would play hockey and be a doctor,” Young said. “I fell in love with my Religion 100 class. I thought it was so cool to learn about the various religions I’d never been exposed to.”

After her freshman year, Young decided to pursue nursing and religion and studied abroad in India In the fall of her junior year. Upon her return, she applied to become an Interfaith Scholar.

According to Bussie, Interfaith Scholars work for the Forum on Faith and Life, researching and presenting religious studies to audiences across the nation. Scholars also host several on-campus religious events.

Young’s experience through the Interfaith Program encouraged her to also become a Peace Scholar, a scholarship offered by Concordia each year.

According to Bussie, The Nobel Prize Conference commissioned Young to introduce His Holiness based on her work as an Interfaith Scholar.

“Peace-building and interfaith cooperation are the two passions of the Dalai Lama,” Bussie said. “Anastasia shares those very same passions.”

Young returned to Concordia the final weekend of spring break.