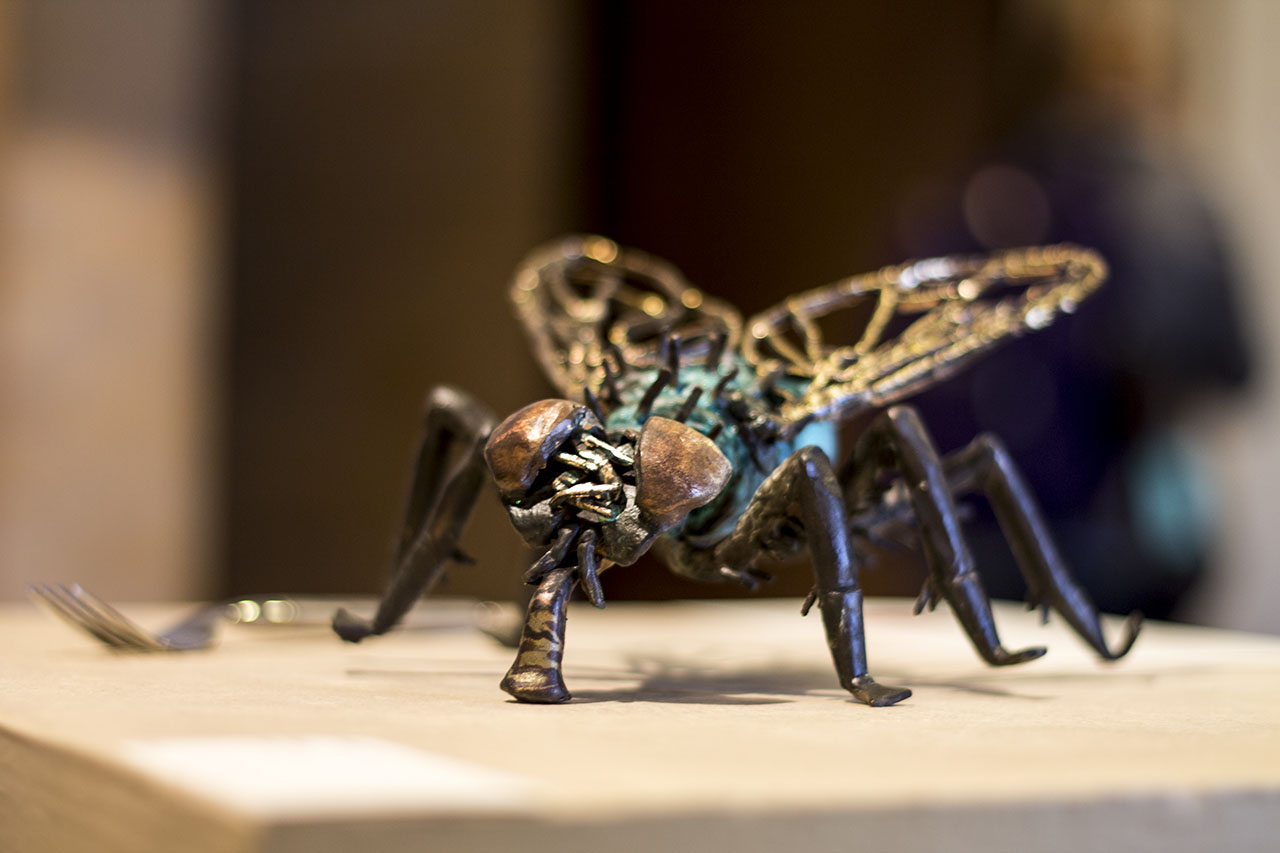 Student creativity is in the spotlight this month at Concordia’s Cyrus M. Running Gallery for the annual student art exhibition.

The exhibition opened with a reception in the gallery this past Thursday and will run until March 30. Each year the exhibition is judged by a juror chosen from the local arts community, who picks the pieces included in the exhibition and awards prizes to those they think best.

The student art exhibition marks the first time Shelby Lund, a sophomore art minor, has had her work exhibited publicly. She had not been aware of the exhibition’s existence last year, and chose to submit her work this year spur of the moment on the last day submissions were being accepted.

Lund’s exhibited work consists of a necklace and a ring she made in a jewelry course as part of a project. The project required students to create something using a “found” object and “an object that related or responded to it” to either create one object or two objects that clearly related to one another. It was also required that students plate their work in copper.

The found object Lund used was a small piece of bark she scraped off of a branch, which she fashioned into the central section of a necklace. The necklace was then copper-plated and tarnished through a process called patina-ing, in which copper or other metal is painted with a solution that makes it appear darker and older.

After applying the patina, Lund sanded down the bark so that its ridges would contrast with its crevices, thereby emphasizing its rough texture.

Lund then made a ring to go along with the necklace, though this time she used clay to simulate bark and copper-plated and patina-ed that as well.

Susan Lee, the Concordia art history professor in charge of the exhibition, said last year was the first time submissions were allowed that were not created in one of the art department’s studio courses.

“It opens up the competition to everyone on campus whether they took an art course or not,” Lee said. “And then secondly, even our majors who regularly do take our studio classes sometimes produce art during the summer or at home.”

“Certainly in our studio courses, our students learn about how to make art,” she said.

“But to exhibit it, to make it public, to share it with an audience is as important as the creation part.”

Many of the artists whose works are being exhibited attended the opening reception on Thursday, at which Art Department chair Peter Schultz presented the five exhibition’s awards, the recipients of which had been determined previously by this year’s juror, Colleen Sheehy, the CEO of the Plains Art Museum in Fargo, who also spoke briefly.

Sheehy encouraged student artists to strive for innovation and a sense of personal connection within their art. Sheehy also remarked upon an “unusual” lack of paintings among the artwork submitted, though she added that a strong selection of ceramic pieces made up for it. This lack was likely due to painting professor David Boggs’ current sabbatical.