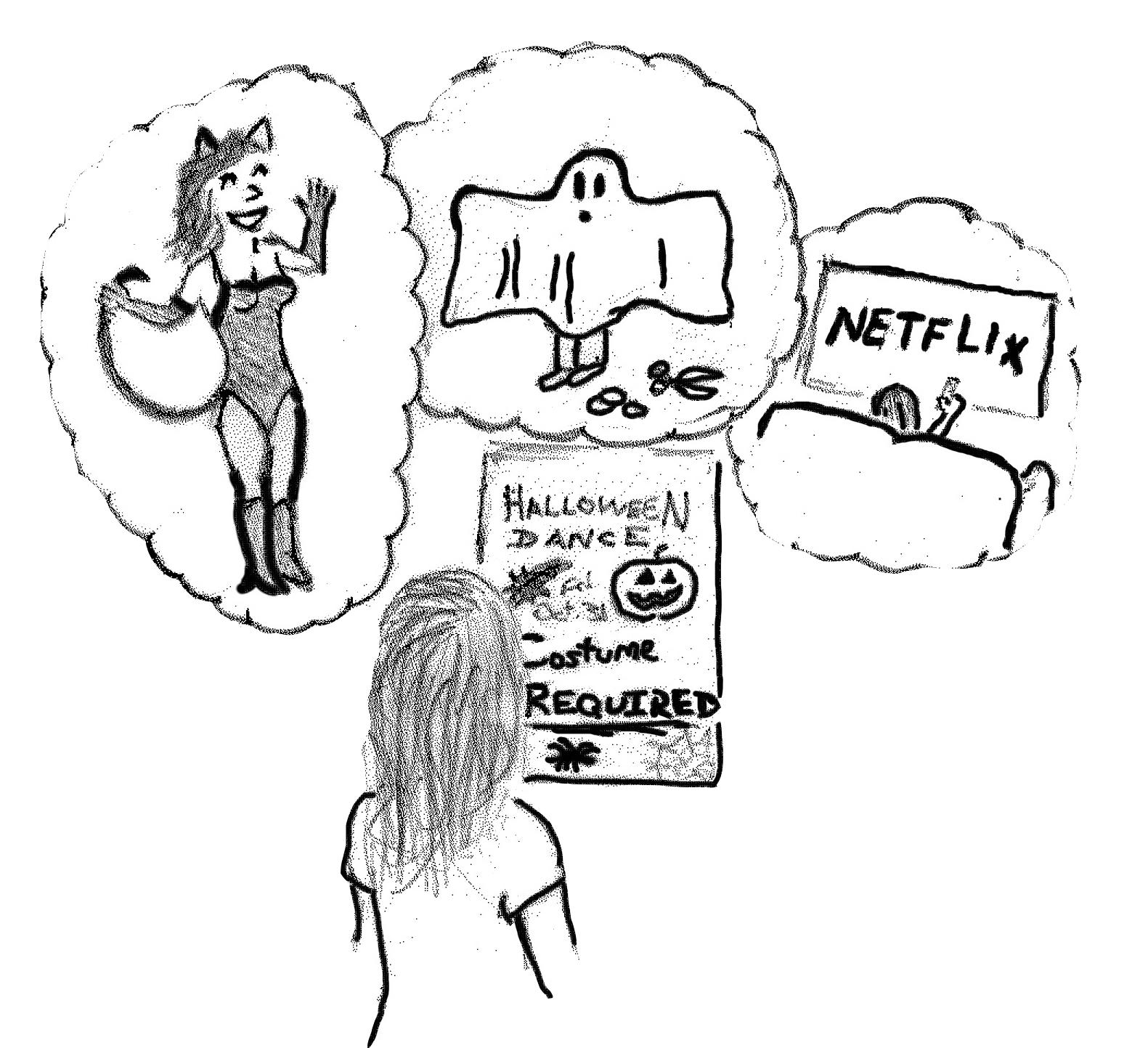 Are they too sexualized?

As Halloween approaches, people are stocking up on candy and preparing their costumes. As people  walk down the costume aisle, men have a wide variety of costumes to choose from, while women experience the stress of having to choose a costume from a limited array of sexualized choices, according to Junior Haley Anderson. Instead of choosing a sexy costume, Anderson is opting to go on a savers run and create her own Halloween costume.

Anderson believes that Halloween costumes have become so hyper-sexualized that it doesn’t give women the option to choose on whether they want to dress sexualy or not.

“Not everyone wants to dress sexualy,” Anderson said. “Give me some other options besides sexy witch, sexy vampire, sexy Disney princess or sexy pirate.”

According to Anderson it is OK for a woman to dress sexualy if that is what she intends to do, but it is wrong for a woman to be given limited options that allows her no other choice but to dress in that way.

“It is your choice, and it is your body,” Anderson said. “Nobody should be able to tell you different(ly).”

As a possible solution to avoid limited and sexualized costume options, Anderson suggested that people use their creativity and make their own costumes. She has gone shopping online and at savers for her costumes and has found that her homemade costumes look better and are cheaper than premade, manufactured ones.

Anderson was able to find an outfit at savers that showed the true portrayal of Bell’s blue dress, from Beauty and the Beast, at 20 dollars, where online it could have been 120 and probably made out of cheaper material.

Sociology professor, Dr. Mallary Allen thinks there is irrefutable evidence that Halloween costumes have not only expanded their market towards adult women, but that it has expanded towards a more sexualized category.

Darcie Sell, Assistant Professor of Psychology and Co-Director of Women’s Studies,  was looking at Halloween costumes online and the only costumes for women that were not sexualized were a Teenage Mutant Turtle and a cow.

Allen emphasized that for a woman to dress sexualy for Halloween is in no way an invitation for a certain type of treatment.

“It is a Halloween costume at the end of the day,” Allen said.

Sell believes that sexualized Halloween costumes are a reflection of our cultural values. Society has promoted the ideal that a woman’s value comes from her appearance and her sexuality.

“It’s sad to me that we are sending a message to women that in order to matter and in order for  people to care they have to dress sexy,” Sell said.

Both Allen and Anderson believe that society has supported female sexual Halloween costumes through the use of media. According to Anderson, big blockbuster films, advertisements and magazines depict a woman of particular body type that the majority of women do not have, yet, society sees this false depiction of an ideal women as the perfect body.

“It’s a societal norm to see women as beautiful objects,” Anderson said. “ And apparently the only way that society can see women is to make them dress as skimpy as possible.”

Senior Conor Roche agrees with the ideal that media has had a factor in supporting sexual costumes. He agrees that through media, Halloween costumes depict an unrealistic body image for women, and believes that some women may choose to dress in the sexy costumes to try and fit that physique.

“The ideal Barbie woman is what women are trying to portray,” Roche said. “The people who can portray that image best are the best dressed.”

When Roche was younger, he remembers girls dressed as big fluffy princesses during Halloween. Now as years have passed, he realizes that sexual costumes for women have become more prevalent in media, especially in advertising.

Allen believes that women feel an increased sense of pressure to wear a sexual costume, because it has become the norm for Halloween. She feels that this stress can strain how a woman looks at herself and can limit her self-expression.

“There are certainly women who feel devalued because the predominant image is a woman with a certain type of body, who is supposed to wear those costumes,” Allen said.

According to Allen, this aspect can often make women feel like they are not qualified to participate in portraying their sexual identity through the Halloween costumes and they can often feel shame and a sense of invisibility.

“There is a sexual object option for men, but they don’t become objects of desire,” Allen said. “Rather, they become sort of blue comedians, because they are able to combine the sexuality with humor.”

Roche thinks that women’s costumes tend to be more scandalous and show a bit more skin, but he also thinks that in some ways, men have experienced a change in their costumes. He described how male super hero costumes are not necessarily small or petite any more. The large size of the muscles on most of the superhero costumes portray an unrealistic image for male body types as well.

Roche also emphasized that people often talk about the disproportionate dimensions of the Barbie doll, but they forget to remember that the male equivalent of that is GI Joe.

Anderson believes that  men’s costumes are more focused on humor than their sexuality, but she has seen a few examples of male sexual costumes.

“There is this subconscious belief that the media and society has ingrained, that [men’s sexualized costumes are] meant as a joke, and according to media the female gaze doesn’t really exist.”

Anderson stated that men may have sexualized costumes, but they may not experience the same ridicule as women when they wear sexy costumes. According to Anderson, society says there is such a thing as the male gaze, or male attention towards women, but no such thing as a female gaze towards men. Therefore, sexualized male costumes aren’t considered a big deal,because according to society, no women will objectify that male.

Sell also thought the sexualization of male costumes was interesting. She found that superhero costumes focus on the physique for both men and women. For women to be a superhero they are showing more of their body, while, for men to be superheroes they are actually taking emphasis away from their own body because of all the additional padding included in the costume design.

“The ultimate consequence of that is that (men) are showing less of themselves,” Sell said.

Anderson believes that another way to avoid being objectified by sexualized Halloween costumes, is to avoid the influence of what society expects of you.