Pictures at a revolution 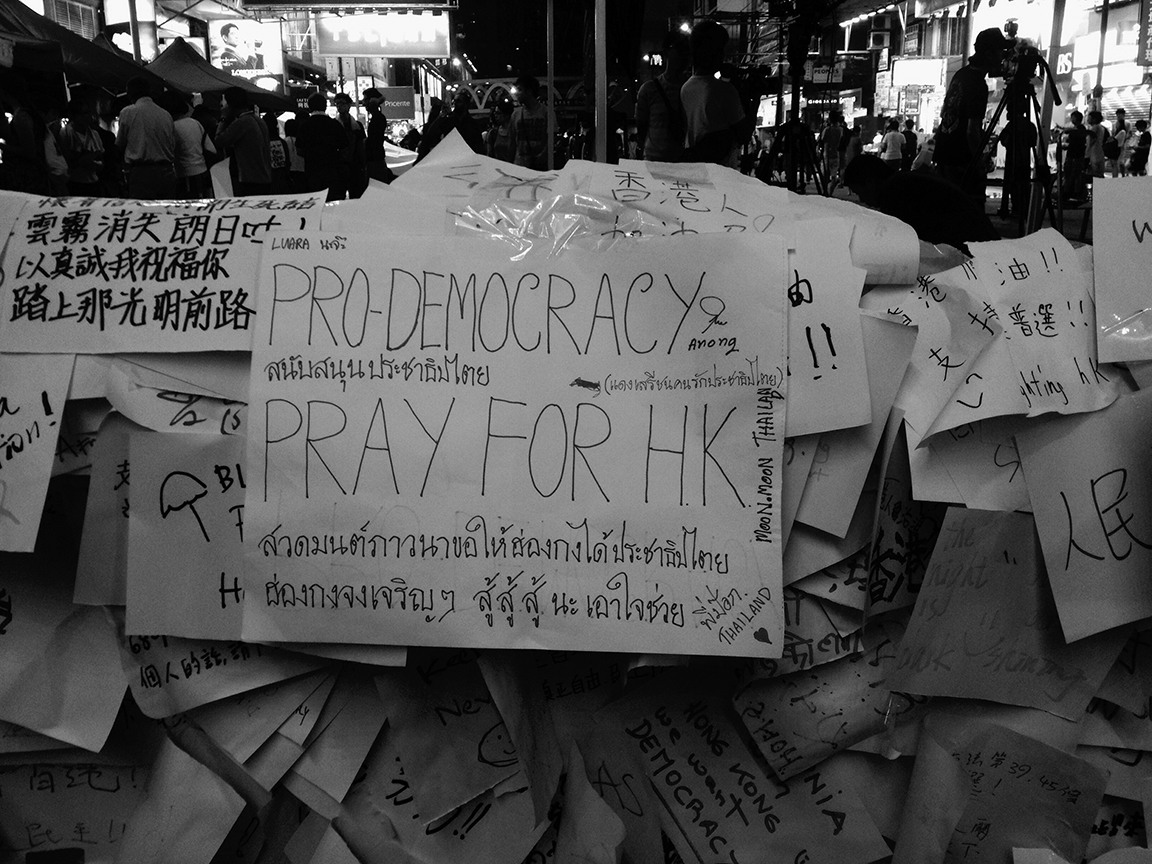 A Cobber’s photo album from the Hong Kong protests

(Editor’s Note: The following article was previously published, on October 4th, under the title “Umbrella reVolution” as a post to its author, Joy Knoppel’s, personal blog. Joy is a Concordia junior currently studying abroad in China. In case you are unaware, Hong Kong has recently been subject to a series of protests over its long-promised shift to a fully democratic government. Joy visited Hong Kong during these protests, dubbed the “Umbrella Revolution” because many of the protestors have carried umbrellas to protect themselves against potential tear gas attacks. She took copious photos and wrote this post in solidarity afterward. Joy has been kind enough to allow us to reprint her post in our paper. This is what BREW looks like, folks.)

If you’re unaware of the political issues going on in HK, please go educate yourself as what I am writing will be limited.

Through my scarce resources I’ve been keeping up with TIMES/ESPN/ BBC reading about what’s going on in HK. I have seen many photos, read different views, and done my best to understand what’s being talked about in the States. I can’t tell you if everything you’re reading is true or false. All I am going to do is tell you what I have witnessed myself in HK during the UMBRELLA REVOLUTION.

Do you see the blue van that is in the photo below (1)? We entered into the Kowloon/TST area and were shocked with how many protesters greeted us. Apparently just before we arrived on the street this van drove through some barricades and literally just stopped here. For about 30min. the people inside would not come out. People crowded around the van and knocked on the windows. Finally, they decided to open the doors and gave a short speech on freedom etc. in which a thunderous applause followed. They then peacefully backed their van out of the street and people continued on. No one was angry. People weren’t rioting. Everything was intense but very peaceful.

Everywhere you went people were sitting or camping out. This is a small row of tents in the middle of the street (2).

(We visited Causeway Bay as well so the rest of these photos are a mixture from there and Kowloon. We went to the outside of Central but did not go in too far for various reasons).

Speeches were given everywhere in both places. By anyone. Many people spoke in a mixture of Mandarin, Cantonese, and English. Rapid applause followed each one. You had to personally be there to feel the fierceness that surrounded these people. The overall message was “We want REAL democracy.” Being here made me so grateful for the privileges I have been given. The people in HK are just dying to be heard and they are bursting with a relentless sort of passion. They won’t give up.

Art covered the streets as well as yellow ribbon. The streets, signs, garbage cans, and fences were filled with signs ranging from “we want real democracy” to “pray for HK.” They were in various languages, and had many interesting pictures on them. Cameras were set up everywhere as well as a few reporters.

This next photo is one of my favorites. During the protests people passed out water, snacks, and the yellow ribbons. I caught this beautiful girl passing out some ribbons to the crowd. Her smile in this photo embodies the beauty that is within this demonstration. The people might be tired, hungry, and hot. But they are fighting for something they care about and this brings them joy.

If you noticed many people were a part of these protests- not just students. There were men, women, and surprisingly a few children. At both places umbrellas were being sold. If you did not know this is called the “Umbrella revolution” because the protesters brought umbrellas to protect themselves just incase from tear gas and pepper spray. I spent a long time just sitting and taking in everything. What an honor to be a small part of history. When I walk around HK many people still wear the yellow ribbon. As they say, “If not us, who? If not now, when?”  Some say this might blow over; others say it might escalate. Either way it is a problem that involves everyone not just the people of HK. Please help raise awareness for the people of HK. Prayers and support are needed, friends.

This article was submitted by Joy Knoppel, contributing writer.