A confession must needs be made before I begin this review: I am a die-hard space fan. From the age of 8 to 18 I slept on a bed with a Saturn-shaped headboard under a ceiling painted with clouds and glow-in-the-dark stars. Until 6th or 7th grade, my career goal was to become an astronaut. I had my birthday parties at the observatory. So needless to say, the movie Interstellar was nothing short of a childhood dream fulfilled.

I will do my best to keep this review semi-objective, but to be fair, Interstellar has received some stellar critical reviews. 74% on Rotten Tomatoes, 9/10 on IMDB, and even some semi-positive tweets from scientist Neil DeGrasse Tyson. Since its debut on November 6th, Interstellar has been getting a lot of attention, from detailed discussions of the film’s complex astrophysics to controversy over sound quality. Regarding the latter, there was one instance where I actually had to cover my ears in the theater. But director Christopher Nolan has defended the deafening aspects of his film (see link above), and for the most part I think the sound of Interstellar was effective. An article from Slate gives an interesting and nuanced opinion on the film’s bizarre yet evocative music, which was composed by Hans Zimmer. 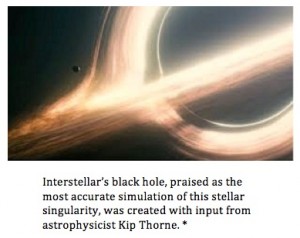 In a film lauded for its scientific complexity and accuracy, Interstellar has a heavy-handed emotional undertone. Familial bonds, especially that between father and daughter, are given center stage among the stars, showing that love is more powerful than gravity, wormholes, and multiple dimensions. This leads to some very emotive scenes, especially those between our main character Cooper and his daughter Murph. However, this moral of “love trumps all” in the face of science is anything but subtle, and when love starts to bend the rules of space and time, it feels a bit sappy to say the least.

I will argue that the power of this film is not its family-oriented lovefest, but rather its sense of wonder and exploration. Cooper could have stayed behind to enjoy all the family time he wanted, but if he’d done that, we wouldn’t have a movie. Like many of McConaughey’s characters (think Mud and Dallas Buyer’s Club), Cooper comes across as a rugged cowboy. But he’s got his eyes set on the stars, and some of the most poignant lines in the movie are from Cooper’s musings about exploration and the future of humanity. On one hand, it’s a message that is starkly anti-earth, where we’ve given up on the very concept of environmental sustainability. Cooper wants humanity to be pioneers, not caretakers.

A sustainability critique of the film could be taken directly from the lips of Murph’s schoolteacher: “If we don’t want a repeat of the excess and wastefulness of the 20th century, then we need to teach our kids about this planet, not tales of leaving it.” However, the sensation of adventure that Interstellar evokes is incredibly contagious. It is liberating and magnificent to leave the dusty earth behind and experience the myriad mind-boggling delights of deep space, if only for the eye candy (see black hole inset). And who can say no to the wild and glorious audacity of Dylan Thomas’ epic poem “Do Not Go Gently Into That Goodnight,” which is quoted at least four times over the course of the film?

I hope that, faced with the impending disintegration of life on our planet, we will try every possible avenue to save the earth before jumping into wormholes. But if that is our last solution, then let’s hope that we do it with the same level of courage, vision and grace that Nolan shows us in Interstellar.

*Info on Interstellar’s science found in this article from Wired.