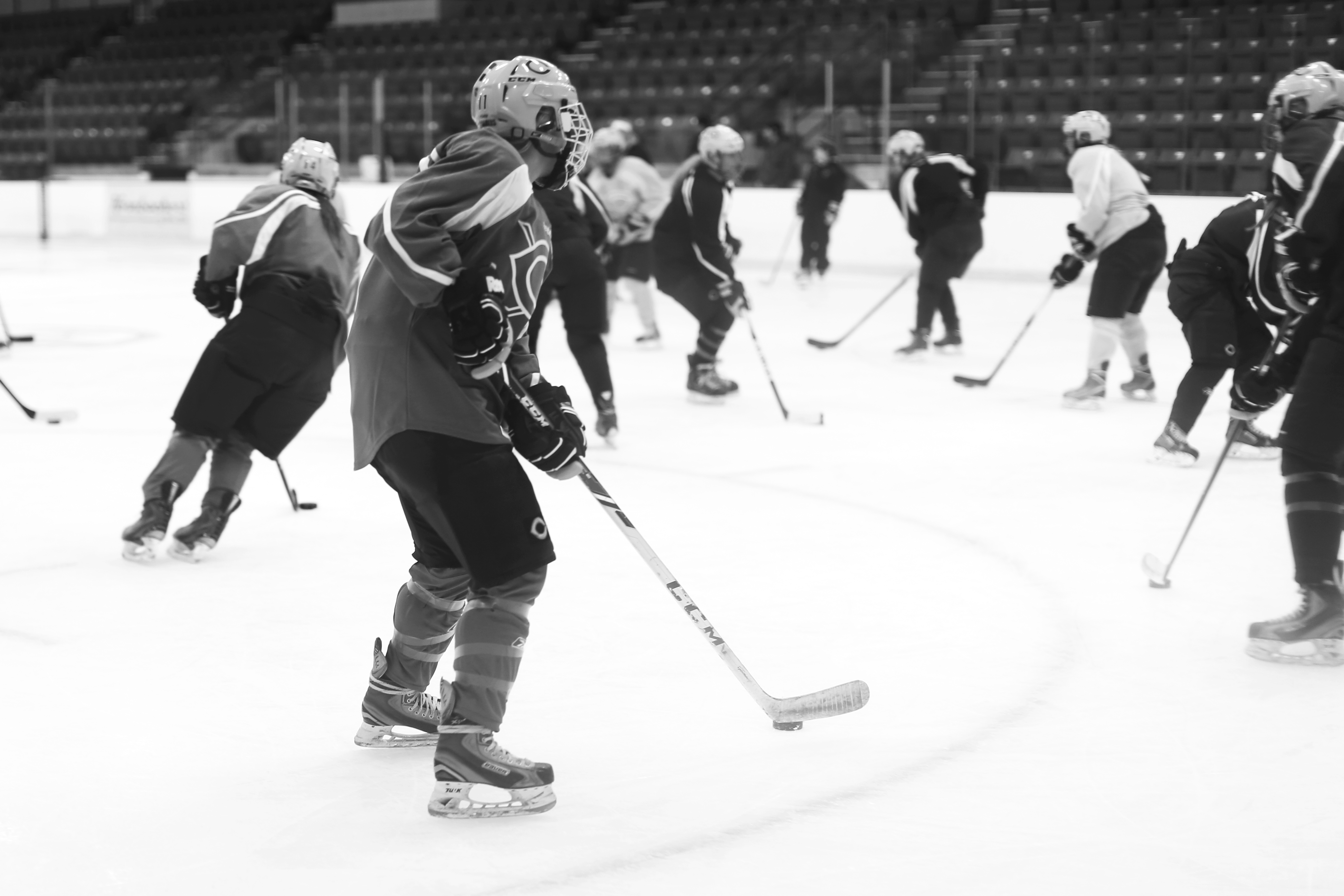 This year, the Concordia women’s hockey team is currently holding a record of two wins and six losses. The season, which started on Nov. 7, is nearing the halfway point, and wraps up in the last week of February. Although the women still have part of the season left, they are hopping to take part in this year’s playoffs.

Head coach Jason Gregoire believes his past coaching experience helped him prepare for this position.

“I was an assistant (coach) last year and was named the interim head coach this summer,” Gregorie said. “I have coached for the past ten years at different levels; six years at the youth levels, two years at the high school level and now here.”

The women’s team is made up of six seniors, seven juniors, ten sophomores, and three freshmen. Although all of the players help each other out, Gregorie attributes the team’s success to senior captains Madison Gendreau and Libby Fransdal and assistant captains Bekah Wright and Kelsey Vandegrift.

“Maddy and Libby are key for us game in and game out,” Gregoire said. “We rely on them to score; keep other teams from scoring and lead us both on the ice and off the ice.”

The assistant captains this year, forwards Bekah Wright and Kelsey Vandegrift, are also crucial parts of the team.

“Bekah and Kelsey are great assistant captains. They play on the same line and give us a great second line to count on regularly,” Gregoire said.

Senior and captain Madison Gendreau has been a part of the women’s hockey team for the last four years. During her Concordia hockey career, there have been three different coaches, which has allowed the team to learn in different ways and has encouraged the women to stick with the team.

“Each coach helped us differently but I think what they all had in common was that they found a way to remind us why we play the game,” Gendreau said. “This year our coach has prepared game film for us every week so that we can focus on things to get better and prepare for the teams each week.”

The team has been experiencing some struggles this year game-wise. Senior and assistant captain Kelsey Vandegrift believes this has occurred because the women have been competing against tougher teams, all of which so far have been nationally ranked.

“We play some of the toughest teams in the first half of the season, so our record so far this year is not the greatest,” Vandegrift said. “However, all the games have been fairly close. We just need to find a way to play a full sixty minutes to win games, and I think we are headed in the right direction.”

Coach Gregoire agrees with Vandegrift, saying that playing the tougher teams in the first half of the season has sparked motivation in the players rather than discouraging them.

”We have one of the toughest schedules in the country to start our season, so the women have been learning what it takes to win against the best teams in the country so far,” Gregoire said.

Despite not some losses, Vandegrift believes Gregoire’s coaching style has helped the team stay positive and given them the motivation to continue.

“Our coaches do a good job reminding us that hockey is supposed to be fun,” Vandegrift said.

“They stress that finding the perfect combination of hard work and fun will help us win games and be as good as we know we can be.”

The two wins of the season have been against two of the bigger schools in the conference. The team won against Bethel on Nov. 21 and recently defeated St. Thomas on Dec. 6.

Coach Gregoire mentioned the team was really looking forward to their game against St. Thomas, one of the team’s biggest rivals. Although the women were up against one of the divisions toughest schools, Vandegrift and Gendreau had a lot of fun playing them.

“We have met them in the playoffs all three years I have played and they are always exciting games,” Vandegrift said. “I would say St. Thomas and Gustavus are definitely our biggest rivals.”

“Since my freshman year the biggest rivalry I would say was Gustavus,” Gendreau said. “That, along with St. Thomas, are the games we are most excited to play.”

The strong bond between the players has helped them get through the most difficult games of the season. Gendreau believes the unique bond the women share is one that is meant to last.

“The relationships that are formed on the team are ones that I know will last a long time,” Gendreau said. “We like to say we are family, we may not like each other all the time, but when it comes to the rink and on the ice we have each others backs!”