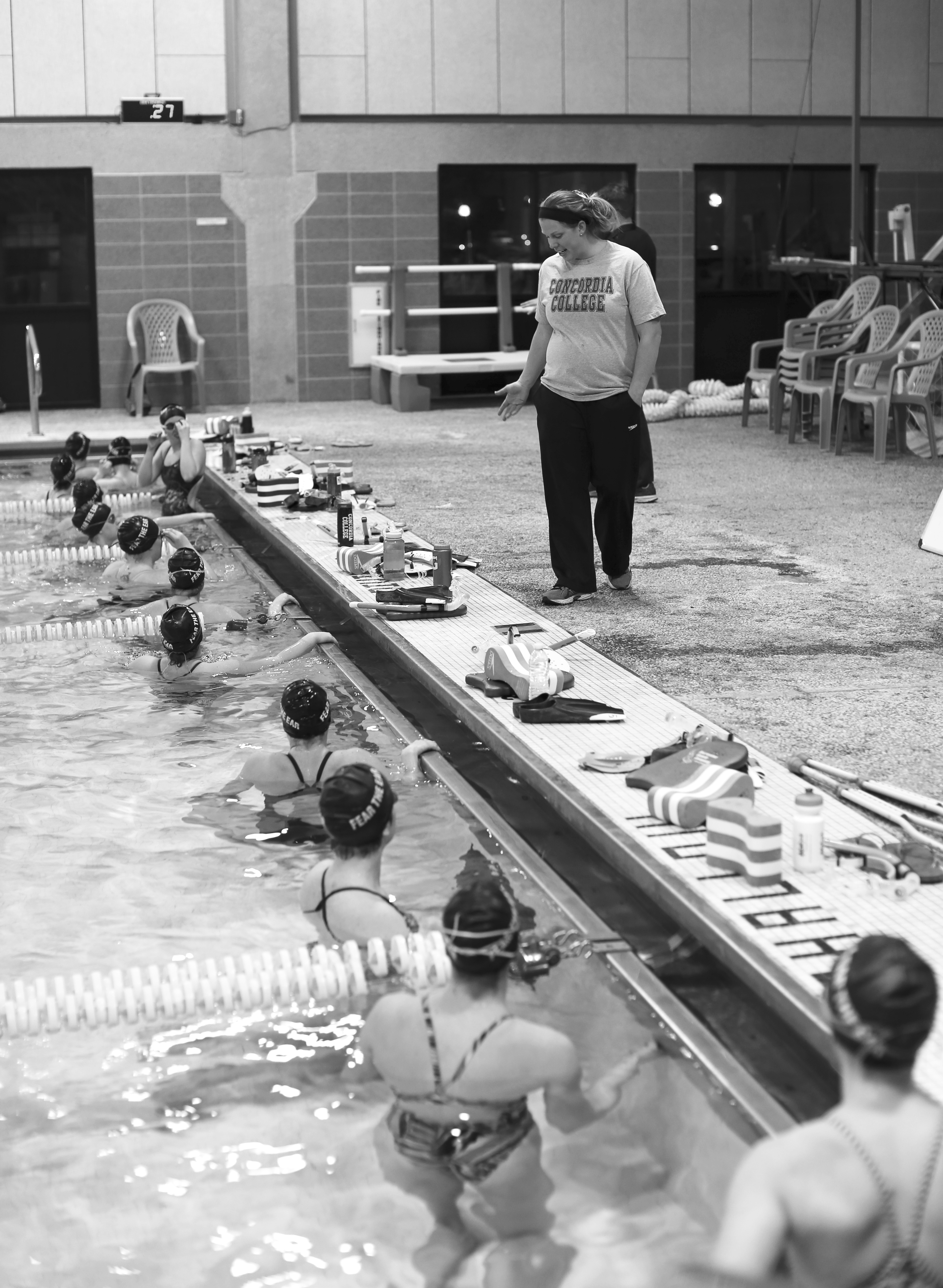 Concordia swimming and diving team experienced large changes this season after their former coach, Ronnie Hehn, resigned from his position. The team was forced to keep preparing without the guidance of its anchor, until an interim coach was found.

Although there were a few difficulties at the start of the season, senior diver Greta Nycklemore, was surprised when she heard the team was going to have a different head coach.

“The transition itself was kind of weird because it was short notice,” Nycklemore said. “We found out the day before the season started that he was not going to be our head coach any longer.”

With the resignation of Hehn, and the season starting soon, Concordia was in need of someone to fill the position. The college’s NCAA representative, Vince Arnold, called in Talia Butery, the interim swimming coach to help start the season off.

“It kind of just fell into my lap,” Butery said. “He just said that their coach had resigned. The timing was just right.”

Prior to getting a call from Arnold, Butery recently resigned from the YMCA after coaching clubs for over 11 years. According to Butery, her resignation and the end of her high school season allowed her to come to Concordia and help coach during the transitional period.

Butery’s arrival at Concordia has been a learning experience for her, and the team that fell into her lap. Prior to arriving at Concordia, Butery had only met three women on the Cobber swimming team through her YMCA clubs.

“Basically the whole team was new people to me, and me to them,” Butery said. “The only other connection I had [to Concordia] is that my brother went to school here.”

As a Fargo native, and member of a family of coaches, Butery has always dreamed of coaching at the college level.

Everyone in my family at some point has coached some sport,” Butery said. “It’s kind of the environment I grew up in and so it’s been something that I’ve always wanted to do.”

Coaching experience and familiarity with the area made Butery her a great candidate to fill in for Hehn. However, the years of experience, and inspiration from her father who reatired last year after coaching for 40 years, made her a great addition to the Concordia Athletics coaching staff.

According to Butery, her father who has been coaching for decades, is someone she would like to emulate as she navigates through her still young coaching career. When she was younger, Butery believed that she would coach track and field like her father. However, Butery got a chance to coach swimming.

“When the opportunity came, as soon as I started, I knew it was something I wanted to do for a long time,” Butery said. “When I came back [from college], that’s when I got the opportunity to coach high school swimming.”

Since then, Butery has coached YMCA clubs, and climbed the ranks and gotten her chance to coach college swimming. in a perfect world Butery would still like to be able to do both high school and collegiate level coaching, however she is not sure if it possible.

“For me, I feel this has been extremely educational.”

With inspired ambition and close to a dozen years of coaching experience, Butery seems to be a perfect fit for a Cobber program, which is hoping to stay competitive amidst transition.

Transitioning into the team

With her insertion into Concordia as the season was starting, Butery had to initially coordinate her schedule as her high school team season was wrapping up. According to Butery, Concordia swimming was flexible with her as she was closing out the high school season to assume her position as interim head coach for the Cobbers.

As the seasons’ progressed, Butery’s main goal has been to adapt and help the team get prepared for their meets. Even though she has been hired, Butery coordinates with the new diving coach, so students can achieve their goals in academics and competition.

According to Butery, her interim position ends in February when the Cobbers have their conference meets. It is her hope that by the MIAC competitions, both the swimming and diving squads will be ready, and on the same page.

As the new member of staff, Butery came into a system without a head coach in place, however, assistant coach, Logan Arnold a student at Concordia was holding the fort down. Prior to being named assistant coach of the Cobbers, Arnold had some valuable coaching experience that prepared him for the transition period.

“Being able to have experience with myself being an athlete and working with athletes at different levels,” Arnold said. “I have been coaching for two and a half years.”

During the transitional period, Arnold was involved in coaching duties from an athletic and administrative standpoint. According to Arnold, these duties of coaching were a new dimension for him.

“I had to learn the administrative side of coaching,” Arnold said. “For example monitoring athletes’ grades, that everyone meets the guidelines to be an NCAA athlete, monitoring the athletes’ schedules.”

Arnold’s load was made easier by the hiring of a diving coach in addition to Butery, the swimming coach. The hire was an expectation that Hehn, had when coached the women..

“It was really hard to focus on both (swimming and diving) at a time so part of his [Hehn’s] promise was that he was going to find us a diving coach,” Nycklemore said. “He did that before he left.”

Nycklemore expressed that even though their old coach found them one who could focus on only diving, the expectation was Henh was still going to be the coach that oversees both swimming and diving.According to Nycklemore, their new coach is a part time coach, and she would therefore miss some of the team’s meets. Now with both diving and swimming coaches, there is more focus on each area.

“I think it almost worked better for us divers to have just a diving coach,” Nycklemore said. “I think it’s (the transition) getting better.”

Even with each section having its own coach, the changes to the coaching staff have the students and coaches working harder to coordinate schedules for practice. According to Butery, the coaches prioritize academics while scheduling practices.

Sophomore swimmer, Jackie Hanson, who was recruited by the former coach, appreciates the flexibility of her new coach’s scheduling methods and her ability to coordinate practice while still adapting to the new level of coaching.

“Talia (Butery) is very good about making everyone’s schedule work with practice,” Handson said. “Talia has never coached at the collegiate level before but she’s doing a really fantastic job.”

Looking ahead, the swimmers and divers hope to stay at an elite level of competition and ultimately be able to compete well in the MIAC conference meets. In the middle of a transitional season, there is optimism among the group.