By: Hans Peter
In: Campus, News
Tagged: lost and found, news
With: 0 Comments 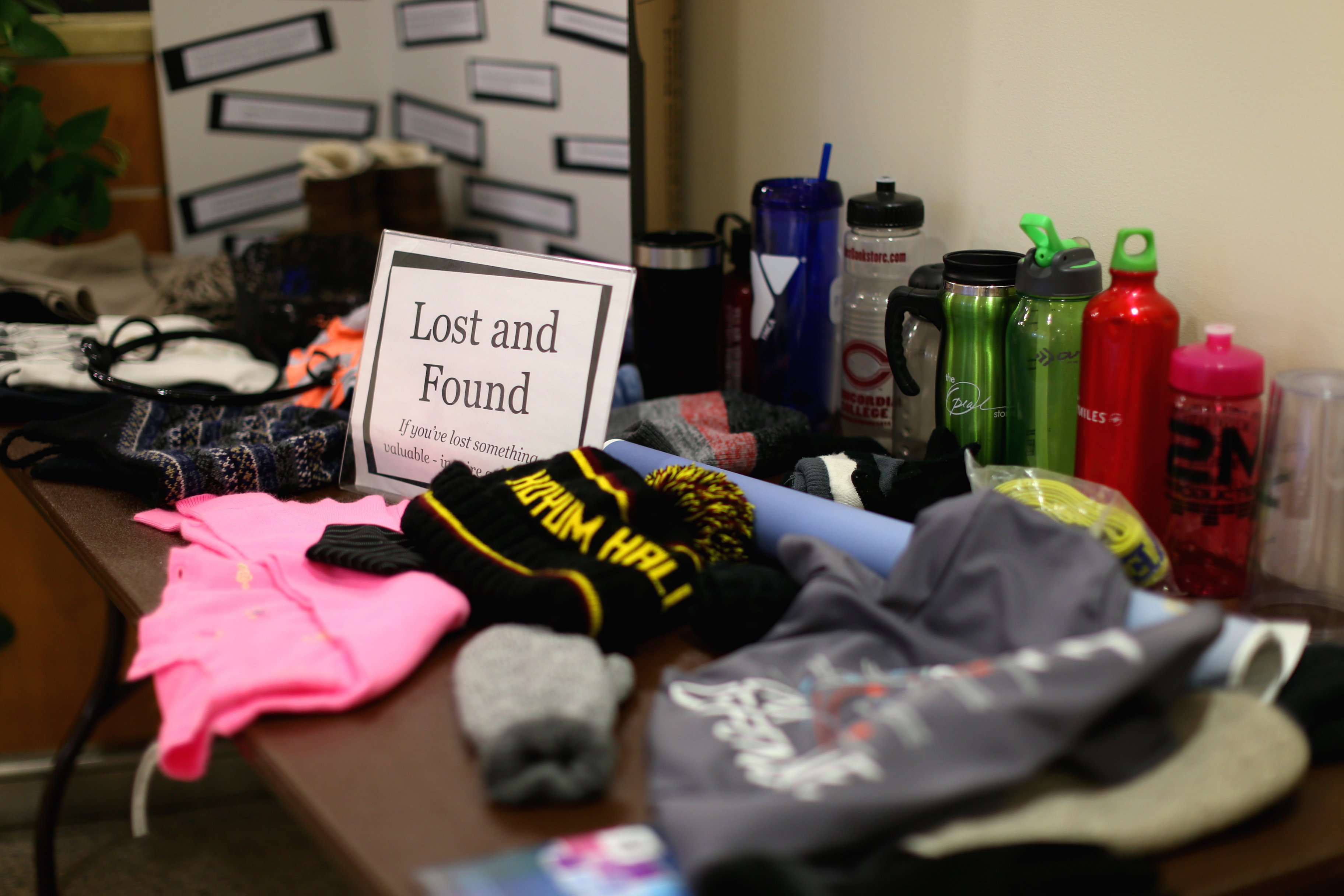 Before you blame your roommate for a missing hat, mitten, or water bottle, you may want to check the lost and found to claim it – before someone else does.

As the semester winds down, the Concordia Information Desk hopes to find new homes for the items left behind by unloving or forgetful Cobbers. To help the process along, the Info Desk has begun offering these neglected objects to the public.

Kelsey Rausch, one of the info desk workers, receives lost items from every corner of Concordia’s campus.

“We have mostly Student ID cards,” Rausch said. “That, and mittens.”

She also had record of hats, gloves, coats, shirts and water bottles. Despite their worth, some items never find their original owners.

“Sometimes we get cell phones, and nobody comes for them,” Rausch said. “Who doesn’t want their cellphone?”

At this point in the semester, long-time items are placed on a table near the Info Desk. Currently, the table holds a menagerie of ownerless sweatshirts, T-shirts and partnerless mittens. At one point, the table held a tiny pink llama doll, which has since found a new caretaker.

The info desk also has a tray filled with watches, jewelry and keychains. Next to that lies a bin of sunglasses, both prescription and non-prescription. All these things are now fair game for those who want them, whether they lost the items or not.

The Info Desk keeps a log of all the items that have passed through – some stay for a brief visit, other unlucky arrivals still need a home. Likewise, the desk keeps record of objects still on the loose. Owners can describe lost beloved items to the Info Desk; if the item arrives in their custody, they will try to match it to the correct owner.

“Last Spring, someone brought in a pair of women’s underwear,” Gjesdahl said. “No one came for them.”

Likewise, a student inquired about a missing 4-seater bicycle. He called back later, claiming his friends had hidden it to “teach him a lesson.”

Gjesdahl keeps the more valuable or personal articles apart from the public collection indefinitely, items such as phones, laptops, credit cards, longboards, and scooters. Hopefully, the owners will miss the objects enough to return for them.

For instance, a professional-grade camera was once brought to the info desk. After a week-long behind the counter, the owner came for it.

“I didn’t want to list what kind of camera it was,” Gjesdahl said. “I figured the owner would know exactly.”

Though many neglected objects are kept from public hands, Gjesdahl said she eventually must find a home for them. For instance, Gjesdahl donates unclaimed cell phones to the Rape and Abuse Crisis Center, as locked phones are usually still capable of dialing 911 in case of emergency.

Similarly, prescription glasses are donated to the Lions Club and unwanted clothes go to a reservation in North Dakota.

This is Gjesdahl’s second year managing the lost and found and her new system appears to return items successfully, as well as find appreciative owners for unclaimed treasures.