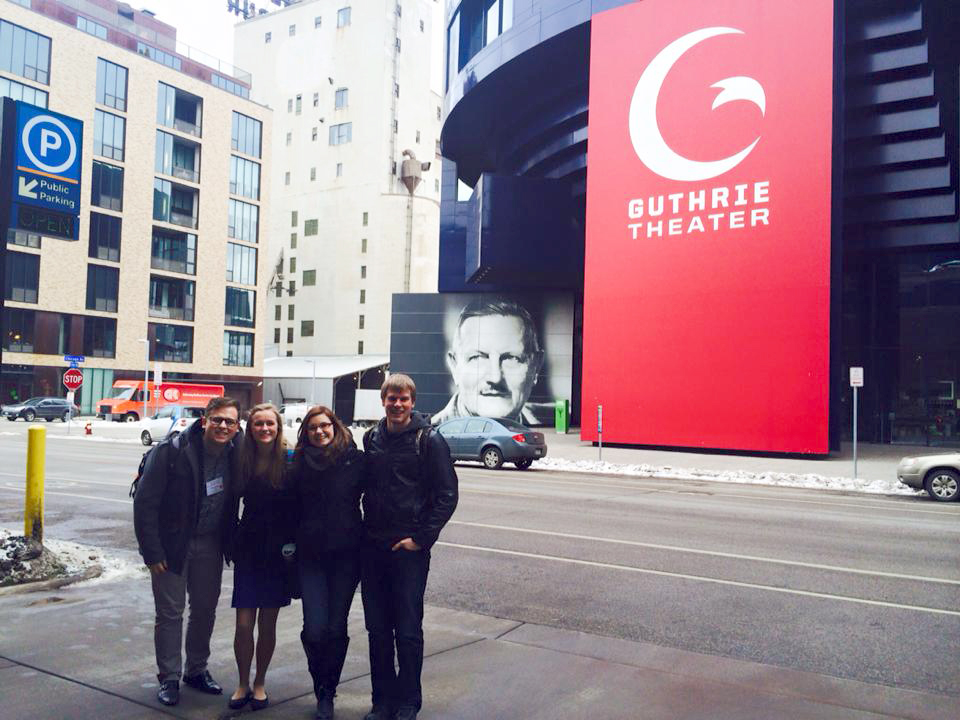 Though its acronym might be confusing, the mission for The Kennedy Center American College Theater Festival is actually quite simple: to instill a love of learning of theater arts through education and support of university and college theater programs.

KCACTF is a national theater program that takes place in several geographic regions in the United States.  Last week, 24 Cobbers got to experience the festival for themselves, spending the week in Minneapolis while participating in a variety of workshops, intensives and competitions.

“It’s the chance to see what other college theaters are doing, and it’s the opportunity to share and grow in your work,” he said.

College students from Iowa, Nebraska, North Dakota, South Dakota and Minnesota composed what is called “region 5” and gathered in Minneapolis not only to compete against each other but also to learn from each other and to make new friendships.

“There’s a lot of sincere collaboration and friend-making going on between different schools, and that’s invaluable in the theater,” Fondell said.

In addition to providing an opportunity to foster new friendships, KCACTF also allowed for students to learn more about the breadth of knowledge in the theater realm.

Sophomore Shelby Coulter said that working with students from different programs exposed her to new ways of thinking about theater.

“It’s a way for me to interact with other theater students and learn different views and perspectives,” Coulter said.

A variety of workshops also provided students with opportunities to learn more about their area of interest, ranging from acting, directing, theater management, technical theater and several other areas.

Senior Devan Luth attended a workshop addressing the struggles of being an actor in today’s world, led by Michael Legg, the Director of the Apprentice/Intern Company at Actors Theatre of Louisville. Though Legg might not be a household name, Luth says he is well-known in the theater world.

“Before coming to Actors, he spent three years as a theatrical agent in New York,” Luth said. “His former clients can still be seen on Broadway, in television/film and in regional theaters across the country.”

In his workshop, which was entitled “Playing the Long Game: How to be a Professional Actor,”

Legg provided advice for aspiring actors on how to survive the business and continue learning.

“He advised us to define what the words Career and Success means to us personally, because that will help us create clear goals that will keep us going in the right direction,” Luth said.

In addition to attending a plethora of workshops, several Concordia students also competed while at KCACTF.

Fondell, who made it to the final round of the Irene Ryan competition along with Hogan, explained the process of the competition.

“It began with 314 pairs of nominated students from around the region, then went into a semifinal of 64. It then went to a final round of 16,” Fondell explained.

As finalists, Fondell and Hogan had the opportunity to perform on the Wurtele Thrust Stage inside the Guthrie Theater.

“It was amazing to perform alongside 15 pairs [of] incredibly skilled actors and singers presenting very polished work,” he said. “It was simply a night to get up and share our work with the conference, and for that I am extremely grateful and humbled.”

Fondell and his partner did not advance to the national competition, but feel great about their performance, he said.

Other Cobbers achieved high accolades as well. Senior Lyndsey Schrader was awarded the National Stage Management fellowship from the Kennedy Center and has the opportunity to travel to Washington D.C. this summer to take part in the national KCACTF convention.

Though all the students involved in KCACTF might not be headed into the theater world after college, for Coulter, it is clear that the experience provided valuable life-long lessons.

“In one of my favorite shows there is a line that goes like this: ‘people come into our lives for a reason, bringing something we must learn and we are led by those to help us most to grow if we let them and we help them in return’,” Coulter said.  “In short, because of the people I (met) here, no matter how small of a suggestion, their thoughts will be used later in my life. How and when I will use these lessons is to be determined.”

2015-01-29
Previous Post: Letter bemoans misleading online courses
Next Post: A glimpse into the life of a freelance photographer