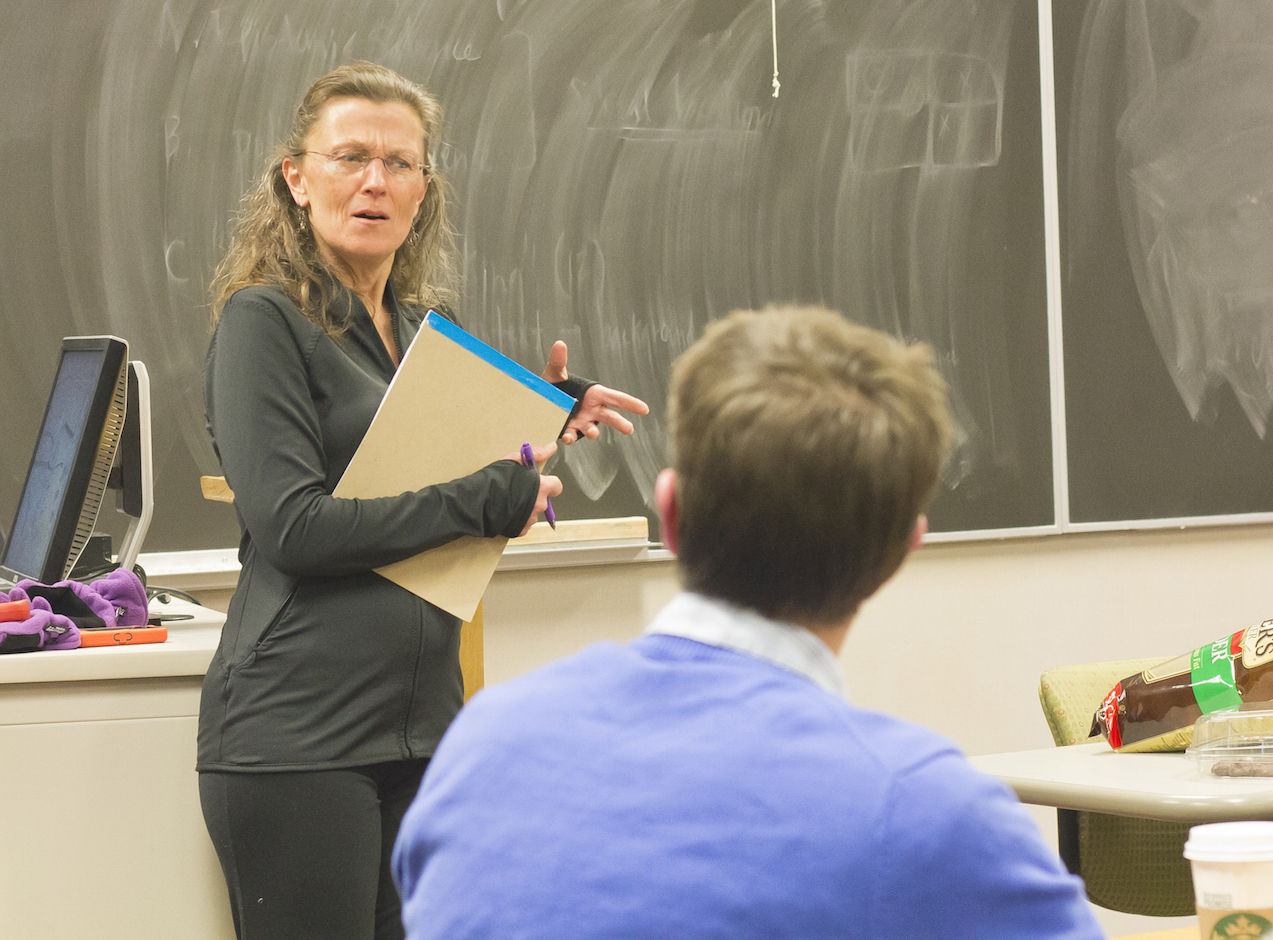 Students leaned forward in their desks, faces scrunched in deep thought. Professors scratched their head, then scribbled a note down as Dr. Michelle Lelwica, religion professor, talked about her research on how and why humans depict their bodies. Buck, her dog, sauntered around the room–sniffing out the cookies and sugary drinks. “He helps me with my nerves,” Lelwica said.

At the first Philosophy Colloquium Series on Jan. 30, Lelwica announced the book she is writing, Shameful Bodies: Religion and the Culture of Physical Improvement, which was the focus of the discussion. Within her book, she will focus on five major issues–body size, disability, chronic pain, illness and aging.

All these issues within the book will circle one question: “How have dominant culture norms shaped the relationship with our bodies?”

One cultural norm came up in the discussion – body hair. In American society, it is deemed that women need to shave their body hair while men do not necessarily need to. A female student at the Colloquium shared her story about how she broke this social norm by allowing her underarm hair to grow. Her friends saw a social media trend where individuals were dying their armpit hair blue and suggested she try it, which she did. When she went home for Christmas, her family was mortified about her hair and told her she was not allowed to attend the family brunch unless she shaved.

“It illustrates so well how deeply ingrained cultural norms are in our minds and bodies,” Lelwica said. “Even when we cognitively question them, even when we practice critical thinking about them, they can still grip us on a deep, emotional level, often generating a sense of shame, or judgment from others, when we don’t comply with them.”

Freshman Sam Bennett attended the discussion and found how societal norms have affected his male friends.

“Everyone wants to be bigger, stronger, have muscles in the right proportions,” Bennett said. “If you don’t have these ideals, then people think you’re lazy or you’re not working hard enough.”

Not only is Lelwica viewing how culture has shaped people’s perceptions about their bodies, she is focusing on how religion and philosophy has contributed to these perceptions.

“I think the problem is that we think we can control our bodies,” Lelwica said. “We have influence over our body, but we cannot control it.”

Lelwica will address the history and beliefs of Christianity within her book, as Christianity is the foremost religion in Western society. She has three main focal points: how worth and virtue are determined by body control; how women are viewed as more “body-oriented” than men; how “salvation and redemption” have been linked to eliminating physical imperfections.

“What connects these Christian narratives and the Cartesian legacies is an imperial, conquest-oriented, conformity-driven attitude toward physicality,” Lelwica said. “An attitude that denies the actual diversity, vulnerability, impermanence and interdependence of human bodies.”

Senior Megan Schindler attended the Colloquium and found the discussion to be refreshing when talking about how religion affects individuals’ minds.

“We like to think of things like religion as empowering and affirming and something that people find great comfort in,” Schindler said. “But they can also be extremely policing and feel constricting, or shaming, when they connect morality to physicality, which individuals have no control over.”

Lelwica noticed how society has affected the way one perceives their body when the doctor diagnosed her left hip with advanced osteoarthritis five years ago. The doctor said she could undergo a hip replacement surgery, walk with a cane or participate in less rigorous exercises.

“I’ve always wanted to avoid invasive things for my body,” Lelwica said. “I did not like the idea of using a cane.”

Employing smaller activities in her days became her treatment for her hip in which she lived with chronic pain for several years after that decision.

“I just wanted to climb out of my body,” Lelwica said. “It felt so similar to my eating disorder because I wanted to disassociate myself with my body.”

As Lelwica and other attendees continued to voice their thoughts about disabilities, Bennett remembered his grandfather, an individual who spent one year in bed after being diagnosed with arthritis at 19, and later spent the last few years of his life in a wheelchair.

“Because of his physical disability, he was understanding and accepting of the body,” Bennett said. “I wish he was still here to talk to him about this.”

Although it was a great discussion, Schindler wished the conversation would have progressed further.

“It’s easy to sit in a classroom and talk about how these notions of the body are formed,” Schindler said. “But it’s another thing to talk about how we can start to change the ways in which we create such concepts, and how we can possibly improve the situation concerning body image and body shaming for future generations.”

The Colloquium series will continue every two weeks. Lelwica’s book will be published in late 2016 or early 2017.

“Becoming conscious of and healing our relationship with our own bodies can not only help us appreciate the beauty and value of others’ bodies in all their marvelous diversity, but it can free us up to care more deeply and act more deliberately in the face of the multiple problems facing our world,” Lelwica said.