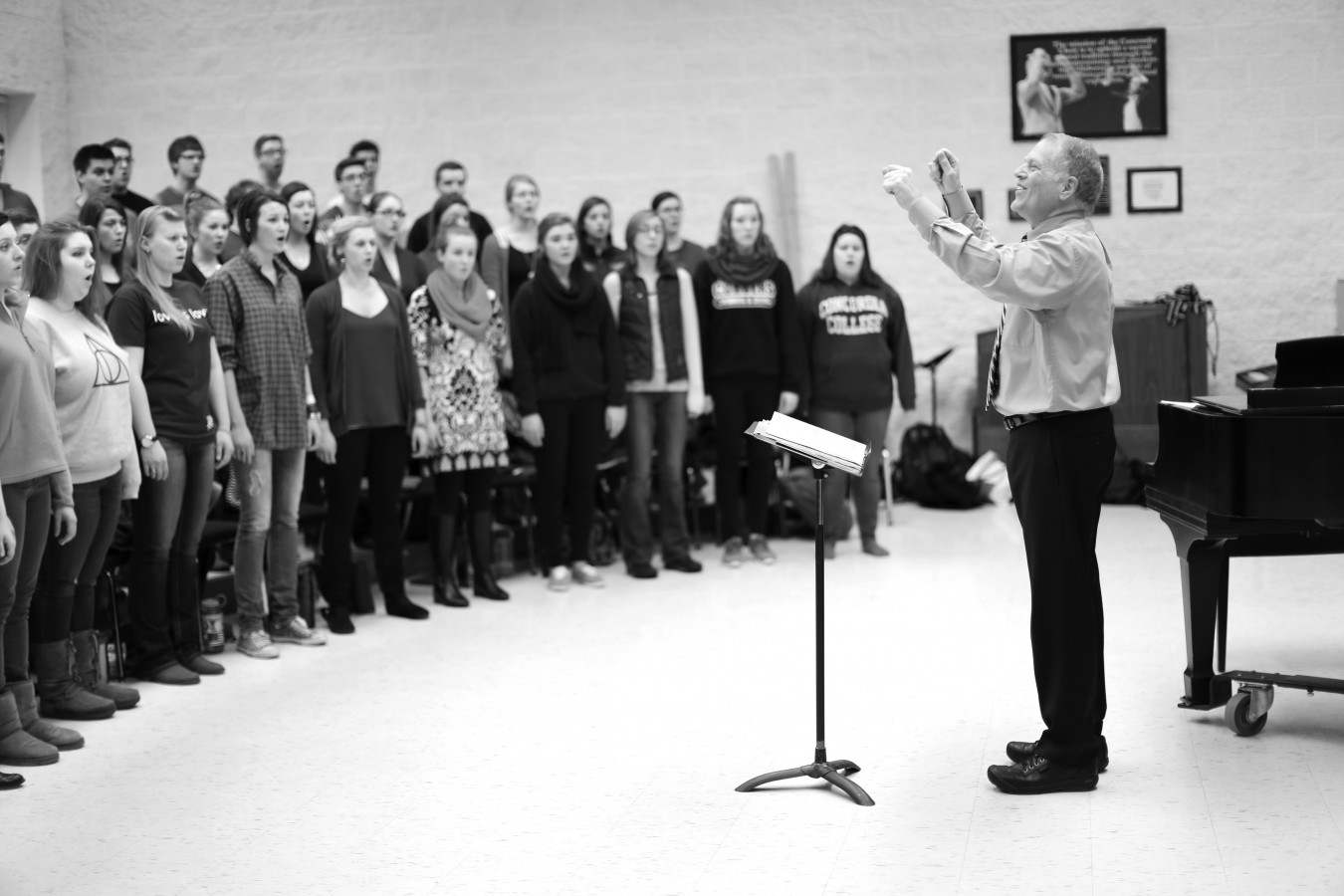 In D. Michael Smith’s last year of directing choir, he had the chance to direct The Concordia Choir in his hometown of Brainerd and reflect on his career on the eve of their national choir tour.

After working at Brainerd for 25 years, Smith retired, only to find himself returning to music to direct Cobbers.

Smith’s conducting career didn’t begin in Brainerd. He started directing at Aitkin High School then moved to Brainerd High School in 1967. His career took him other places in the community, and then he changed course and co-owned a music store for four years.

Smith’s career took an unexpected turn when the store went bankrupt. He had a difficult decision ahead of him.

“I had to decide to do something outside of [conducting music] or to get back into music,” Smith said.

Smith was offered several jobs but didn’t want to make a quick decision, since he had taught music for so many years.

“My family and I went out to Colorado and took time to pray and talk, and in my heart, I then knew that I had to get back in music,” he said. “So that is why I accepted the position at Brainerd.”

Smith ended up directing at Brainerd for another 22 years from 1984 to 2006. It was during these times that Brainerd became his home, and he knew that he made the right decision.

Now, in his last year directing at Concordia, Smith was nervous to be heading back to Brainerd with Concordia for their mini choir tour. He had great expectations going back, knowing the community would have their own expectations as well.

Concordia choir performed with Brainerd High School’s a cappella choir. Smith said that they were fortunate enough to have a nice auditorium to perform in.

Brainerd is a place that Smith remembers and loves dearly. He has many memories of spending time with his family and students, and of the extremely supportive community.

One of his favorite Brainerd memories is when he went touring with his a cappella choir in Europe.

The highlight was performing in F. Melius Christiansen’s church in Larvik, Norway.

That moment was a highlight in his career. While conducting Brainerd’s a cappella choir, it reminded Smith why he became a director.

Smith’s high school choir director took him to a St. Olaf Choir concert when Olaf Christiansen was directing. He said the moment he sat down and heard the concert, that was it for him.

“I heard the St. Olaf Choir sing [Oh Day Full of Grace], and I said if I can be in front of a group that sings that kind of music that is what I want to do for my whole life.”

Since then, Smith has been following that dream, and directing has become not only a passion but a way of life.

During the time he spent in Brainerd, Smith described the community as really supportive of music. Brainerd has a music tradition that stretches back to 1937, and a lot of that tradition is supported by the high school’s directors.

“We were it. We didn’t have any help,” Smith said. “If you wanted a good program you had to put the time in. The community expects that.”

Within that tradition, the directors were expected to help the students be the best they could be. Smith would lead sectionals after school one day a week, give lessons during the school day and uphold the touring tradition either around the United States or Europe.

After 25 memorable years in Brainerd, Smith retired in 2006, only to find he was not ready to give up directing.

“Immediately I flunked retirement and came [to Concordia] for six years and had the position Dr. Culloton has right now,” Smith said.

Even though Smith “flunked” retirement, it wasn’t an easy decision for him to make. He and his wife had retired at the same time. However, he gives thanks to Bruce Phelps, who was the Choral Manager at the time, in helping encourage him to come to Concordia. .

“He kept talking to me saying you know the door is open and you would never know unless you come through,” Smith said.

In the end, Smith decided to enter that doorway to Concordia after a day of getting acquainted with the college.

“It was a love fest the whole day,” Smith said.

The day Smith came to check Concordia out, he met the students and faculty and got to direct the Concordia choir. During all of these moments, he grew more and more confident that Concordia was where he belonged.

“When I left [Concordia after that day], I said yep, this is where I feel like I am being called to work,” Smith said.

After six years, Smith went back into retirement, only to flunk out a second time in order to stand in for Dr. Rene Clausen in directing Concordia Choir for this year. He may have not known it at the time, but by accepting this position, Smith would later find himself returning to Brainerd for a night.

“I never thought I would be in this position,” Smith said. “Dr. Clausen and I are good friends and he really wanted a year off to refresh himself.”

Being back this year at Concordia has been a wonderful experience for Smith and he enjoys being back on campus.

“The students I get to work with are stellar. They are wonderful people and give so much of themselves,” Smith said. “I enjoy being on campus as well. It is stimulating.”

Although Smith is grateful to be here this year and is happy to have this experience, deciding to step in for Clausen was a scary decision.

“There are all kinds of expectations that the college has and the alumni have, because you are representing the college,” Smith said.

However, despite his doubt, Smith trusts this was the right decision.

“I decided I would feel like Moses,” Smith said. “He did not think he was capable of carrying out God’s plan for the Israelites and it was a lot of soul searching on my part to see if I had what it takes for this job. I put a lot of trust in God working in my life. I was called to do this and so sometimes you go ok, if this is what you want, ok we will do it.”

Deciding to come back to Concordia was a very exciting decision for him. Right next to the time he asked his wife to marry him. Since he has been back, Smith said that among his favorites memories here at Concordia are daily rehearsals.

“They ebb and flow but there is always a moment with in them that is special,” Smith said.

He’ll treasure the memories from this last year of rehearsals.

“In your vocation you are called to do what you are doing,” Smith said. “The best decision I ever made was getting back into [music].”