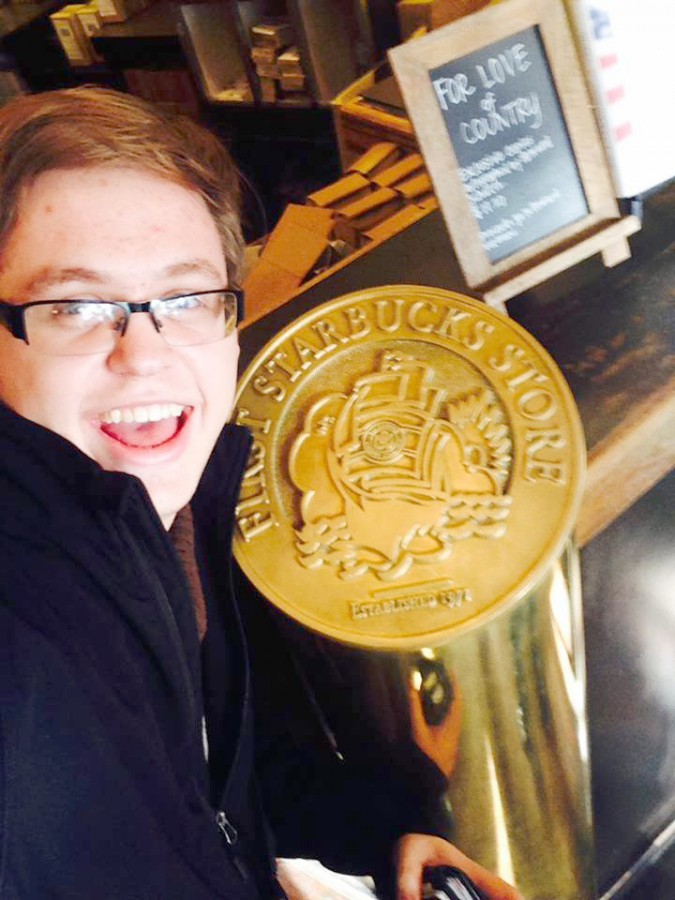 The scent of freshly brewed coffee wafts through the air, adding warmth to the walnut-colored tables, the brown leather chairs. The phrase “16 ounce caramel macchiato” rolls off the tongue with such ease.

As a member of the Concordia band, junior Zac Paulsen had the opportunity to experience BREWing at the original Starbucks on the recent band tour to Washington state.

Paulsen, who plays bass clarinet in the Concordia band is a self-proclaimed coffee-addict.

His addiction began in college.

On mornings that Paulsen forgets to bring his coffee with him to class, he feels compelled to purchase coffee to save himself from the headaches, shaking and confusion he sometimes experiences when without caffeine.

“I really don’t want to know how much money I’ve spent on coffee,” Paulsen said.

Though the amount of coffee he consumes varies, one thing is for sure; he needs to have it.

“I start out with my 20 ounce mug every morning and I drink all of that and then it goes up from there,” Paulsen said. “Without coffee, I really wouldn’t function well in class – especially morning classes. There’s just something about coffee … I just need it.”

One of Paulsen’s favorite coffee vendors is Starbucks, which was founded in 1971 in Seattle’s well-known Pike Place Market.

As a member of the Concordia band, Paulsen had the opportunity to visit the original Starbucks while on tour. That wasn’t his only visit to a coffee shop on tour, however.

“When I was in Seattle, I was drinking too much coffee because there was coffee all over the place – just everywhere,” he said. “So I just felt like I was vibrating most of the time.”

Paulsen said that he noticed that the coffee in Seattle did seem to have a better quality than coffee he has had elsewhere. According to Paulsen, this might be because of the freshness of the coffee beans, which Paulsen said are brewed nearby the Seattle area

“All of the coffee in general just seemed to taste better,” Paulsen said.

Though Paulsen made a point to visit the original Starbucks while in Seattle, his experience with the band allowed him to experience BREWing in another sense.

While on the Concordia band tour, Paulsen got to visit various schools located within or nearby the Seattle area.

According to Paulsen, while on their tour, members of the Concordia band got to work with high school students. Band members also also got to witness the well-being of different high school music programs; something that deeply interested him as a music education major.

“We would sit in with them and give them pointers on different things,” Paulsen said when describing his interaction with the high school band students.

In addition to working with high school students from various schools, members of the band also had the opportunity to perform a side-by-side concert with several of the high school ensembles.

Witnessing the music programs and working with students was something Paulsen found inspiring.

“As a future educator, having the experience of going and seeing all these different band programs – that’s just really inspiring to me because that’s what my goal is.”

Though the Seattle trip allowed Paulsen, a coffee aficionado, the opportunity to experience some of the finest coffee, the real goal of the tour, according to Paulsen, was to inspire young musicians.

“Every night after the concert we had multiple students come up and say ‘that was amazing’ and ‘thank you for coming’ and it was nice to see what we came there for – and I feel like we succeeded. We spread Concordia’s name in a very positive way,” Paulsen said.