By: Sage Larson
In: People, Variety
Tagged: Variety
With: 0 Comments 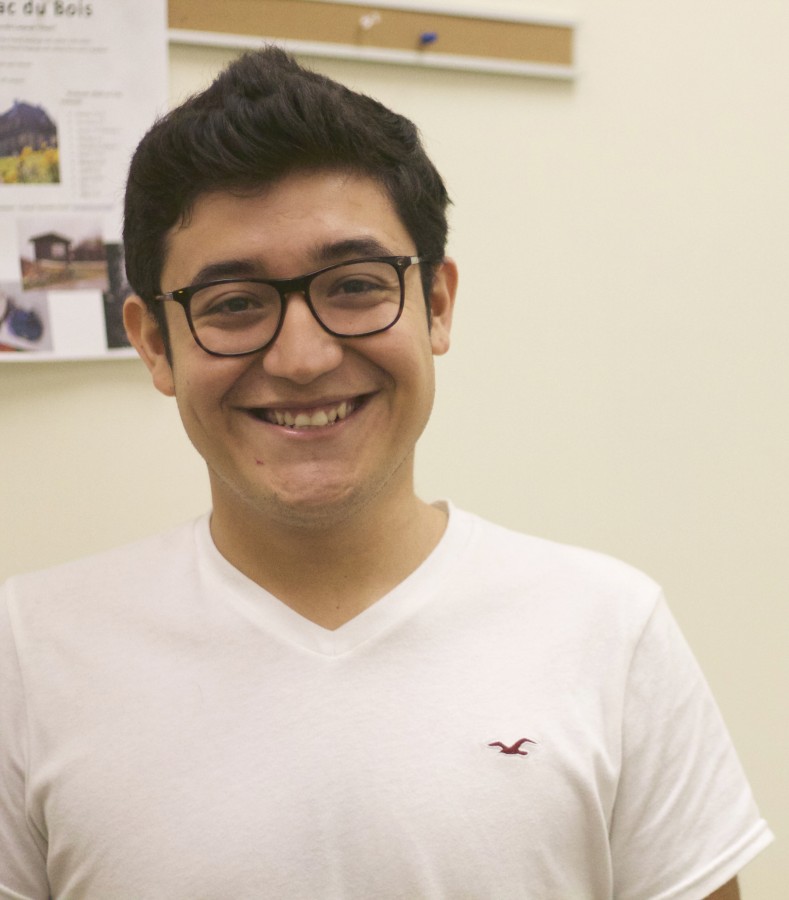 Alejandro Galván crosses his arms in front of his chest, scrunching his mouth into a pucker. He uncrosses his arms soon after, readjusts his glasses, opens his mouth to say something, then stops. Elbows on the desk, his face rests in his palms. Thirty seconds pass before he speaks. “Sometimes it is easier to speak in English, and sometimes it is easier to speak in Spanish.”

Galván is a junior studying business. He started his studies near his hometown Mexico City at La Universidad Autónoma de Querétaro. Last summer, Galván seized the opportunity to come to the United States and worked for El Lago del Bosque at the Concordia Language Villages following a suggestion from a family friend.

In other words, his experience has changed the way he sees the world, new possibilities and new things he can try to obtain and achieve.*

Pablito Gasparini was the one who encouraged Galván to study at Concordia College. Gasparini partook in Concordia’s Native Assistant program last year.

Through this program, students from Spanish-speaking countries study at Concordia for a year while helping American students enhance their Spanish language skills through weekly conversations. No professors attended these conversations in hope that students would feel more comfortable speaking and listening. The purpose of the program is to aid students with speaking and listening the language from a hispanohablante (Spanish-speaking) student that is their age.

Galván came to Concordia this past fall.

“I think that in Mexico, it’s better perceived to have studied in the U.S. than my country,” Galván said. “So I thought if I had studied here, I will have more work opportunities in my country.”

“Not only is he able to teach students about his native country, he has learned a great deal about the U.S. and the culture of the students with whom he works,” Sillers said.

Galván spends his weekday evenings with Spanish students. On top of taking time out of his schedule to curate content for the conversations and lead these conversations, he has to keep up with his school work–another cultural difference to adapt to.

“In Mexico, we didn’t have to read,” Galván said. “We had more daily assignments though because we had the same classes every day. The tests were more difficult than here because they had more open-answer questions, which made it more difficult.”

At Concordia, Galván finds himself reading and writing more for his classes compared to what he had previously done in college in Mexico.

“I had to get glasses because I read so much [here],” he said.

He has learned to read, write and speak in a second language.

“With my friends, it’s easier [to practice English] because they have more patience to understand me and help me,” Galván said. “When I have language barriers, I try to help others understand me with keywords or body signs, which helps a lot.”

His professors understand his position and have lots of patience to help him learn the material, he said.

Sillers, friends and classmates have aided him in many ways as he has immersed himself into the United States.

“The [Spanish] department has enjoyed having Alejandro,” Sillers said. “He is very intelligent, respectful, responsible and easy to work with.”

This summer, Galván will continue his work with CLV. At the end, he plans to travel around the United States to gain more perspective of the country he has been studying in for the past year. In September, Galván will be on a plane flying back to Mexico.

“I’m so thankful for CLV and Concordia because they opened doors to this wonderful world,” he said.