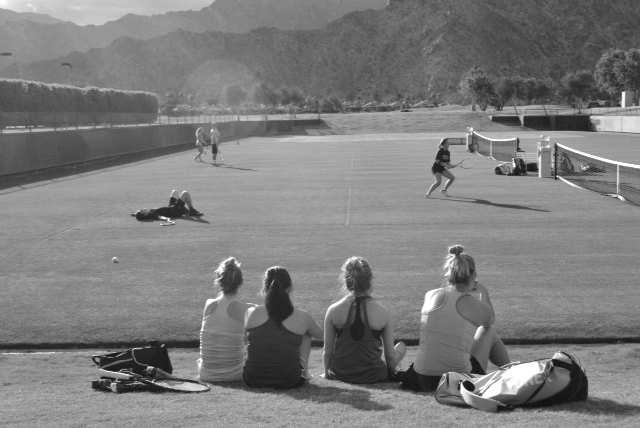 While I-94 became crowded with students drifting back home or to locations for various mission centered trip during Spring break, members of both the men and women’s tennis teams traveled to California to further their training and compete against Chapman University. Throughout the week, each team completed a variety of practice sessions, visited Indian Wells, and the men ended the week with a tough lost against Chapman.

During the first few days of the trip the teams toured and hit at the Indian Wells courts, which is where the BNP Paribas Open is played. After visiting where the athletes warm-up and play their matches, the team had a chance to play on some of the Indian Wells’ practice courts. Freshman Liz Elton, felt special playing on the same courts as the professional tennis players.

“Getting to play on the practice courts where the professionals play was really cool and seeing where the locker rooms are,” Elton said.

Besides the feeling of joy freshman Kendra Stoick got when she practiced on the Indian Wells courts, she was in awe over the fact that she got to walk on the court as some of the most famous tennis players in the world.

“It was awesome walking on the same court that Rafa Nadal and Roger Federer played at, and the stories the guy told us about the behind the scenes of what goes on with the players when they are practicing in between matches was such an honor to hear,” Stoick said.

The team had an awesome opportunity to play on clay and grass courts for a few hours, which provided them with a great view of mountains. During their practice the team enjoyed trying out the different court surfaces. For many of the players, this was a first time experience and turned out to be one of the players’ favorite days. Captain Brittany Glatt finally crossed playing on the grass and clay courts off her bucket list and was thrilled to take part in a tennis player’s dream.

“The grass and clay courts were super cool to experience,” Glatt said. “They were a lot different than I had always imagined and I got to cross it off my bucket list.”

On Friday the men’s team had a match against Chapman University. Isaac Toivonen and David Schneck pulled out a doubles win. Junior captain Austin Storm believes the match was a good experience for all the players.

“The match was a good learning experience,” Storm said. “We got to play a team that has had a steady program for a while, so it shows us what we can become if we continue to work hard.”

The trip brought everyone closer and turned out to be a great bonding experience, and was filled with laughs from both the teams. The women’s team especially found number one singles player, Isaac Toivonen as an inspiration for their own tennis games. Toivonen had a big impact on sophomore Rose Reinert. Reinert found his comedy to be a great distraction from the pressure to play well. Reinert recalled “Isaac singing his address song to me when I’m nervous.” Even though the team endured two practices a day, a lot of fun was still had.

During their free day both teams headed to Knotts Berry Farm, a country themed amusement park. Here the players enjoyed the riding the roller-coasters and had a blast. Given time to relax and bond with each other, both teams have gained more trust and many memories. Elton confirms that bonding is a very important part of the team experience and improves the chemistry on the team.

“I really enjoyed getting to know the team better and bonding more as a team,” Elton said. “Knotts Berry was a good place to do that.”

By the end of the week many of the players felt better about their tennis games and are pleased to say they are ready for upcoming matches. According to sophomore Jesse Schneeberger, members of both teams were looking to not only experience California, but improve on their tennis skills.

“I wanted to get a feel of California tennis and improve my own game,” Schneeberger said.

Overall the tennis teams had a good trip and head coach for both the men and women, Steve Futchko II really enjoyed visiting Indian Wells and sharing a special part of California with his players.

“My favorite part was going to Indian Wells,” Futchko said. “I got to see the pure enjoyment in my players faces as they received the tour and then to watch them all play on the courts that the pros play on was special for me.”

Although the tennis season is about halfway through and both teams are continuing to look strong, and are getting ready for upcoming matches. Futchko is excited about the progress both teams are making and thought the California trip helped them a lot.

“Both teams are looking stronger than last year,” Futchko said. “I expect some good victories out of both men and women this year due to more court time.”