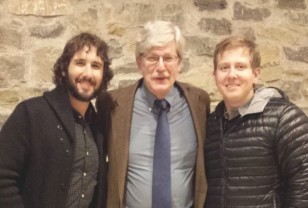 Standing behind a lectern in a church more than 300 hundred years old, Jonathan Clark reaches down to retrieve a book dating back to the late 17 century. He is in Bietigheim, Germany filming a segment for the TLC television show “Who Do You Think You Are?”

Clark hands the book to Josh Groban, American singer and songwriter, telling him that it was written by his eight times great-grandfather, a deacon, mathematician, astronomer and music teacher.

Groban opens the book and flips to a yellowed title page, tracing his finger along the decorative script. He points to the pen name of his great-grandfather. “Who is that?” he asks.

Clark is about to reveal to Groban that the book he is holding was the reason his great-grandfather was removed from the Lutheran church. Johann Jacob Zimmerman had attempted to predict the fall of the church during the controversial religious movement in Germany known as pietism.

Clark, along with a group of scholars and historians from the show, had been researching the ancestry of Groban’s family for the past few months when they decided to look closer at the life of his great-grandfather.

Although Clark was not sure why they chose this particular ancestor, it is evident that he lived an interesting life, which is disclosed throughout the episode.

Clark also mentioned that Zimmerman had intended to move to America with his family after leaving the church, but he never made it because he passed away before they arrived. His supporters did make it and that is the exciting part, Clark added, because he still had an impact on America.

Clark is an associate professor of German and has been teaching at Concordia since 1994. In December 2014, he received a phone call from TLC, The Learning Channel, asking if he would like to join their research team for an episode featuring Groban.

“They called me and I said sure. Anything that’s a bit different from what I do on a regular basis is kinda fun,” Clark said.

The show has been airing since 2010 and focuses on American celebrities discovering unknown facts about their families by tracing their ancestry with the aid of historians and genealogical experts.

Clark had been referred by a colleague because of his extensive knowledge of religious fanaticism and radical pietism. He studied the topic for his doctorate dissertation in graduate school, although he does not claim to be an expert.

Clark defined Pietism as a movement that began among German Lutherans around the year 1670 as an attempt to emphasize ideals of Lutheranism such as salvation, service and personal faith. The followers of this movement believed that their relationship with God had more significance than the church itself.

“I realized how long it had been since I have been involved with that kind of religious history and cultural history which is so out of the mainstream,” Clark said.

Clark began his research shortly after he was asked to be on the show, but he did not know Groban was going to be featured until late December.

“I found out for myself that I have to refresh my memory about pietism and all the facts and figures,” Clark said.

The research team would give prompts to Clark and he would search for the answers. He put in a lot of effort researching the time period, the region, background information and things relating to Zimmerman.

“It’s amazing how much comes back to you because you know where to look for it,” Clark said.

Clark enjoyed the research process because he had to try to fit the pieces of the puzzle together. Later on he was able to find several letters and church documents written by and about Zimmerman.

For Clark, it was an opportunity to dust off his memory and return to the subject he had spent decades studying.

Much of what he loves about being a professor and historian is that he is always learning. To him it is the beauty of the profession.

“That’s why professors are professors, because they want to be students forever,” Clark said.

With the majority of his research complete, Clark boarded a plane in January headed for Stuttgart, Germany. Although he has traveled to Germany before and has been to Stuttgart, he had never been to Bietigheim where the show was filmed.

In Bietigheim, Clark spent one day filming his segment of the show. During that time he worked closely with Groban and the production team.

“He’s [Groban] got a good sense of humor. He likes to Josh around,” Clark said.

Clark mentions that although they edited a lot of the footage, often times he and Josh would play off of each other’s humor.

For Clark, filming the show was the most challenging part of the experience. The script was tedious and although Clark knew most of what he was going to say, all of Groban’s reactions were genuine.

Sometimes he would have to adjust his lines to answer a question from Groban or to expand on a comment he made.

Clark was surprised how organized the production was, especially since there was both a German and an English production team working together. He was also surprised to learn how scripted reality television really is and decided that although it was fun, it is not a career he is ready to join anytime soon.

Despite the challenges and surprises, one of the most memorable moments for Clark was being able to hold the documents without gloved hands. It was a neat experience, he says, to sit next to Groban in the pews of the very church his great-grandfather used to preach in, holding the letters, documents and book he wrote.

Another memorable part of the trip for Clark was the reception Groban held at the church after filming was finished.

“These people went out of their way to make us feel at home,” Clark said.

Clark mentions that one thing about Germans that stands out to him is that they are really friendly and hospitable. He recalls that they had kuchen, which is a German cake, pastries, coffee, soda water, and apple juice in addition to a meal.

He remembers thinking to himself, “this is great.”

Reflecting on his trip and experience, Clark is glad he agreed to it.

“I would not have done this if my chair and my wife said I shouldn’t,” Clark said.

The opportunity allowed him to get in touch with his passion for learning and his spontaneous side for trying new things.

“I have fun teaching and I have fun researching,” Clark said.

Arnold is a history professor at Concordia and has known Clark for more than a decade. At one time they even had the chance to teach a Credo class together in which Arnold mentions that their opposite teaching styles meshed quite well.

“I was always the concrete, sequential personality of the two and he was more abstract and random,” Arnold said.

Arnold enjoys watching Clark teach because he works well with the students, he is enthusiastic about teaching and he has a very vibrant personality.

“He [Clark] loves his family, he enjoys movies and books, and he loves teaching.”

It is evident that Clark is dedicated to his passions, especially his contagious love for learning.

This article was submitted by Kaitlin Preusser, contributing writer.