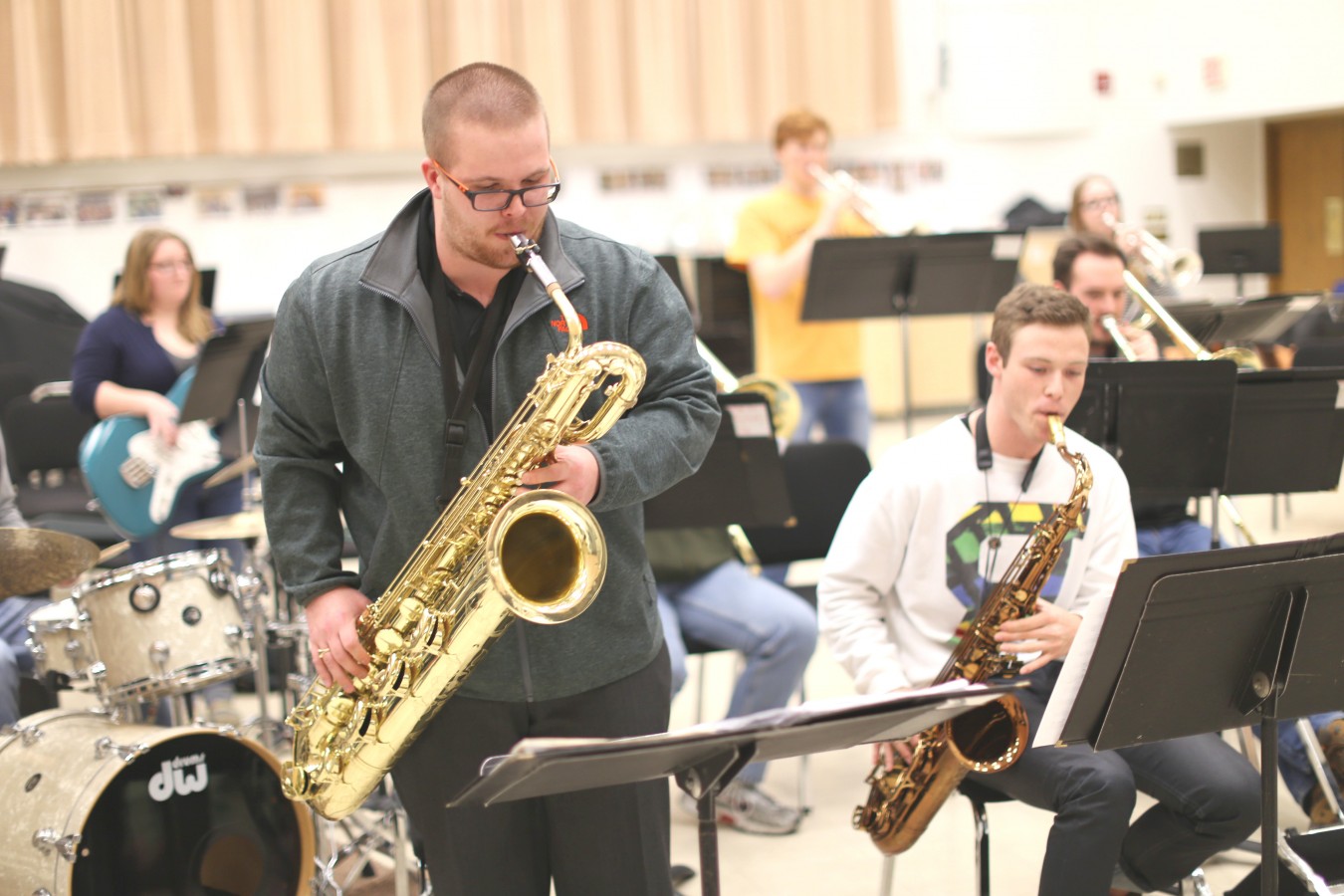 Cobbers are preparing for their last few days of the school year. For the senior student musicians, their to-do lists include stepping down so younger musicians can take over.

Senior violinist Conor Roche plays in the Symphonia Orchestra. Roche received a scholarship for Concordia’s music program and has been a member of Symphonia for all four years.

In high school, Roche was injured for six months and could not play an instrument. That injury made him realize how much playing the violin meant to him.

“I was always forced to practice and play,” Roche said. “Then, when I physically could not play the violin, I realized how much I liked it and how much of a stress [reliever] it was.”

Senior Sally Pigeon was introduced to music at a young age as well. Pigeon has been in choir at Concordia for all four years, and has spent the last two years in The Concordia Choir.

“To have had different experiences in different choirs and with different instructors is important in being able to reflect on moving on,” Pigeon said.

Senior saxophone player Mike Brumm has been playing for twelve years. He plays in both Symphonic Band and Jazz I at Concordia.

“When I was really young I used to imitate playing [the saxaphone],” Brumm said.

So when sixth grade came around and it was time to choose an instrument, he picked up the saxaphone and never looked back.

“Jazz has always been a big influence in my life and what I have done,” Brumm said. “There is a lot of emotion behind jazz and there is always a story. It’s easy to play how you feel.”

Music to Pigeon is quite similar to Brumms impression on Jazz. Music is a way for people to escape, to experience their emotions in a comfortable way that creates meaning, Pigeon said.

“I have heard throughout my singing career a lot of directors and students say, ‘leave your worries at the door … and think about what this music is going to make you feel,’” Pigeon said. “It’s important to have that release and cathartic moment where I can reflect on what I am feeling.”

Choir has been a place for Pigeon to create something beautiful. She is proud to be a part of something that is so high caliber. She dedicated herself to making music with the family she has found in The Concordia Choir.

“[Choir] has felt natural and I always loved it,” Pigeon said. “I have always been a part of something bigger….a part of [a group of] people who appreciate the same music. [There is] so much camaraderie and family in choir.”

Thinking back on his experiences, Roche said his conductor is what really made Orchestra worthwhile.

Roche treasures the time he got to play “Pirates of the Caribbean” because being able to play popular tunes is always a fun experience.

Hawaii holds a spot in Pigeon’s memory. Last year’s tour for The Concordia Choir took them to Washington, Oregon and Hawaii. The plane landed in Hawaii at 10 p.m., and Pigeon and the majority of the choir ran to the beach to play in the waves.

“Everybody went together and it didn’t matter who [you were],” Pigeon said. “Just that you were all in choir together.”

While in Washington for the choir’s northwest tour, Pigeon shared an experience with her choral family that was a once in a lifetime occurrence.

She describes a moment where The Concordia Choir was performing in a large cathedral. In the middle of their most dramatic piece, the church bell started ringing on the same exact pitch they were singing.

“It felt like the world came together at that point,” Pigeon said.

As the bells rang, Dr. Clausen took an extra two-second pause to appreciate the harmony of the bells and his choir’s voices.

“We appreciated it for half a second and sighed,” Pigeon said. “There it is.”

The college music-making experience has not always come easy for Roche and Pigeon.

Prior to college, Roche had always been a first violin. When he joined Symphonia in his first year, he was assigned as second violin and was asked to lead the section. The big difference is first violinists get the melody, and as a second violinist, he was now playing harmony.

“I had to take initiative and be more confident,” Roche said. “I really thrive from sitting next to someone better than me, but as second violinist they’re your equal, so you have to rely on yourself.”

For Pigeon, it was not about changing roles in her music ensemble but a matter of getting herself there. Seeing the same people every day and having a consistent routine made it hard to get herself to choir, Pigeon said. She is someone who likes to change things up, and having rehearsal every day became wearisome sometimes. However, Pigeon still found the motivation to go.

“Once you are there … you enjoy and appreciate every second,” Pigeon said. “[Music] is such a great thing to have in your life. To have music every day and to be privileged to be a part of something so much bigger than you … is important.”

Despite their memories, Brumm, Roche and Pigeon realize their time has come to an end at Concordia. Although they are sad, they know it is someone else’s turn to stand in the spotlight.

“There is so much talent,” Brumm said. “Especially at Concordia, you can never worry about it ever getting worse.”

Brumm knows that once he leaves, he doesn’t have to worry about Symphonic band or Jazz.

“I love Concordia, but it’s one of those things when you know it’s time to move on … I am ready to do what I want to do for the rest of my life,” Brumm said.

Brumm hopes to start his own band. Throughout college, he has played in a Jazz band combination of his own and he would like to extend that beyond college.

Roche feels a twinge of sadness, but he said he feels blessed to have experienced Concordia music first hand.

“I started as a freshman in the same orchestra and experienced the transition of me looking up to the seniors, to being an equal, and sticking through it for four years,” Roche said. “It will be fun to hand off the reins to new people.”

Roche feels it is time to give up his seat and allow someone else to experience what Symphonia can do for them. He is at peace with what he contributed to the orchestra, and he knows that students, professors and Capistran will continue to push players to be the best they can be.

Pigeon agreed that being at the end of her college music career is a bittersweet experience.

“It’s very odd…having been a part of this incredible music making and to be on the edge of this cliff where I am not going to have that anymore,” Pigeon said. “You look over the edge and you get this drop in your stomach and know it’s the last time.”

That being said, Pigeon acknowledges they are just making room for the next round of music-makers.

It is the next class’ responsibility to build up the legacy that Roche, Brumm, Pigeon and the rest of the seniors have helped create and nurture.

As for advice for those who are facing this legacy, Pigeon said to be aware of why you want to sing or play.

According to Pigeon, some students join choir to become a part of the choral family. Others join to use choir as a stepping stone to Concordia Choir or because they have been in choir for so long that they think it is expected of them to join. Pigeon wants students to choose it for their love of music.

“Find a way to [sing] in a way that makes you happy, not because you feel like you need to,” Pigeon said.

The need for passion in playing an instrument is something that Brumm emphasized. He said talent wasn’t needed, just the desire to create.

“Never stop loving what you are doing,” Brumm said. “You don’t need to be the best player…having the passion to do what you need to do is the only way you will succeed.”