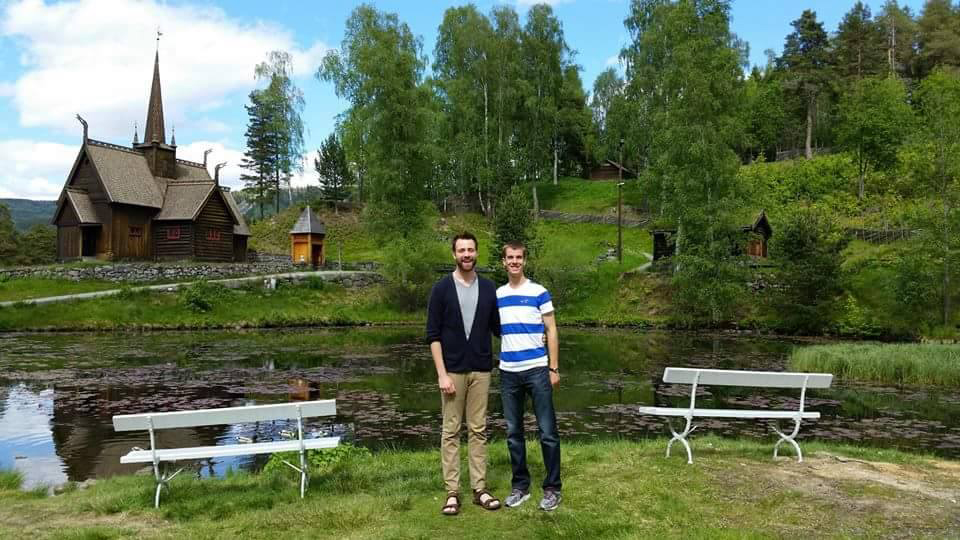 Students representing 89 different countries met in Norway this summer in an effort to have meaningful conversations about peace. Alex Gray and Matthew Lillehaugen were selected to represent Concordia in the 2015 Peace Scholars program. The two students spent one week in Lillehammer, Norway and six weeks in Oslo over the course of the summer.

“The goal of the program is to promote peace studies and dialogue, and to strengthen the ties between Norway and the United States,” said Dr. Milda Halvorson, associate professor of Norwegian and chair of the selection committee for the Peace Scholars program at Concordia.

In Lillehammer, Gray and Lillehaugen partnered with the Rotary Young Friends program, which consisted of students from the former Yugoslavia. Together, the 12 students learned about the fundamentals of dialogue, about life in other countries, how to listen to and respect each other’s thoughts and beliefs, and how to develop friendships.

“The program provides several opportunities to learn about peace,” Gray said in an email. “These include studying how dialogue can be used between people in conflict to help them better understand each other, actually engaging in dialogue with people who come from very different backgrounds than you, and partaking in an interdisciplinary course that asks critical questions like, ‘What role does identity play in conflicts around the world?’”

In Oslo, Gray and Lillehaugen began summer school classes. They both took a Peace Scholars course, while Gray took a class on Scandinavian Government and Politics, and Lillehaugen studied Norwegian.

“I learned a lot about different parts of the world,” Lillehaugen said. “We had 598 students from 89 different countries. Getting to tap into that wealth of knowledge and experience isn’t something you get to do every day.”

Gray and Lillehaugen will present a research project sometime this spring, after Gray returns from his semester abroad in India. For Gray, his time in Norway was a learning experience that went beyond his research.

“While I still don’t really know what ‘peace studies’ is and I don’t think I’ll be able to save the world anytime soon, I did meet some incredible people from all over the world and realized that when you really get to know someone else’s perspective instead of passing judgement or hate on them, peace seems a little more possible,” Gray said in an email.

Steinar Bryn, director of the Nansen Center for Peace and Dialogue, will visit Concordia the first week of November and deliver a lecture, Halvorson said. She is working with Bryn to plan other activities as well, such as class visits, a workshop, and the screening of a documentary film.

Halvorson is waiting to announce whether the Peace Scholars program will be offered through Concordia again this spring. The decision is made by a committee in charge of offering scholarships through the program and will not be released until mid-October. She encourages students from all fields of study who are interested to apply for the program.

“I think part of what the Nansen Center was trying to do was just give us a better understanding of how hard it is, but give us hope that… through intentional effort, you can develop goodwill,” Lillehaugen said.