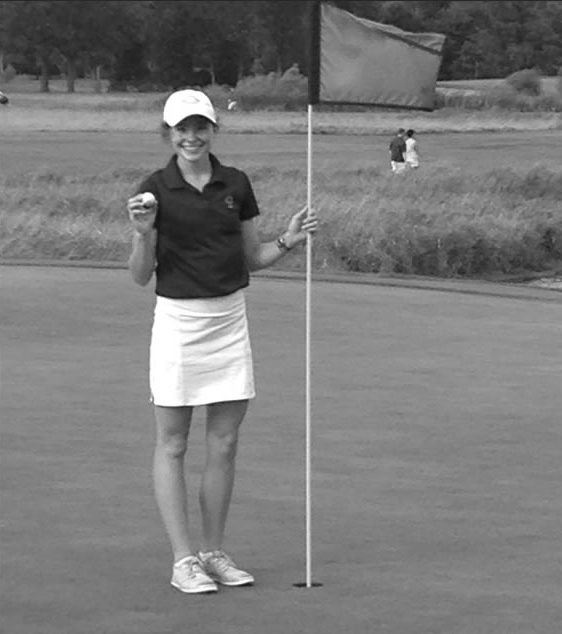 It’s 145 yards from the tee-box to the hole — 165 yards when a 20 mile an hour wind is factored in. Junior women’s golfer Emily Grace Olson had been clubbing up during the entire St. Benedict’s fall invite on Sept. 6 to overcome the unbearable headwind. On a hole where she would normally play a four or five iron, at the recommendation of her coach, Olson teed up her ball, pulled out her hybrid club, and let it rip. Head Women’s and Men’s golf coach Duane Siverson stood by and watched as she swung.

“It never left the flag,” Siverson said. “It kept rolling and all of the sudden it just stopped.”

According to Siverson, with a wind as fierce as the one during the tournament, the flag had been leaning a bit more than usual causing the ball to lean against the flag.

“We stood there for about 10 seconds and I said to Gracie, ‘Gosh that would have been fun if it would have went in,’” Siverson said.

The hope began to diminish as Olson and Siverson made their way to the cart, but as they approached the cart Olson was called back.

“I got off the tee-box and then the next girl teed up and was like, ‘I don’t see your ball anymore,’” Olson said. “I didn’t actually think that it went in until that girl said, ‘It’s not on the green. It went in.’”

According to Siverson, usually after someone hits a hole-in-one, especially their first one, they get distracted and don’t care what else happens. This wasn’t the case for Olson. Olson continued to play through the excitement, shooting a par, a bogey, and two birdies on a few of their remaining holes, getting her personal best collegiate round with a score of 84. Olson’s ability to maintain composure and continue on may have come from countless hours of preparation and words of wisdom from Siverson.

“Coach is really stressing ‘stay positive, stay relaxed and take every shot one at a time,’” said junior Haley Johnson, women’s golfer. “We want to keep level emotions while playing and really try to put some good scores on the board.” Competition is tight this year, according to Siverson.

“We’ll have our hands full,” Siverson said. With six teams in the MIAC league being ranked in the top 50 in the country, the Cobbers are competing against a pretty elite group.

“St. Thomas, Carleton, Gustavus, and St. Ben’s — those are the top four teams,” Siverson said. “They are all averaging 330 and we are averaging about 350 so they’re about 20 strokes better than we are.”

The women’s golf schedule is three tournaments in and picking up quickly. The women head out to Carleton’s College City Classic the weekend of Sept. 26 and 27, where they will be up against almost all of the teams in the MIAC; according to Siverson, this will be somewhat comparable to the conference meet. The team knows what they need to do to be at the top of their game.

“We are pretty much in the middle to the end of the pack,” Johnson said. “But if we all come in and shoot good rounds we could actually be pretty competitive.”

With the pressures of hosting the conference meet this year and hopes of bringing home the gold, the Cobbers look to go out with a bang, or in the words of Siverson, “We will make some noise.”

2015-09-24
Previous Post: Flexibility required among science students during building renovations
Next Post: Why do we even bother with debates?