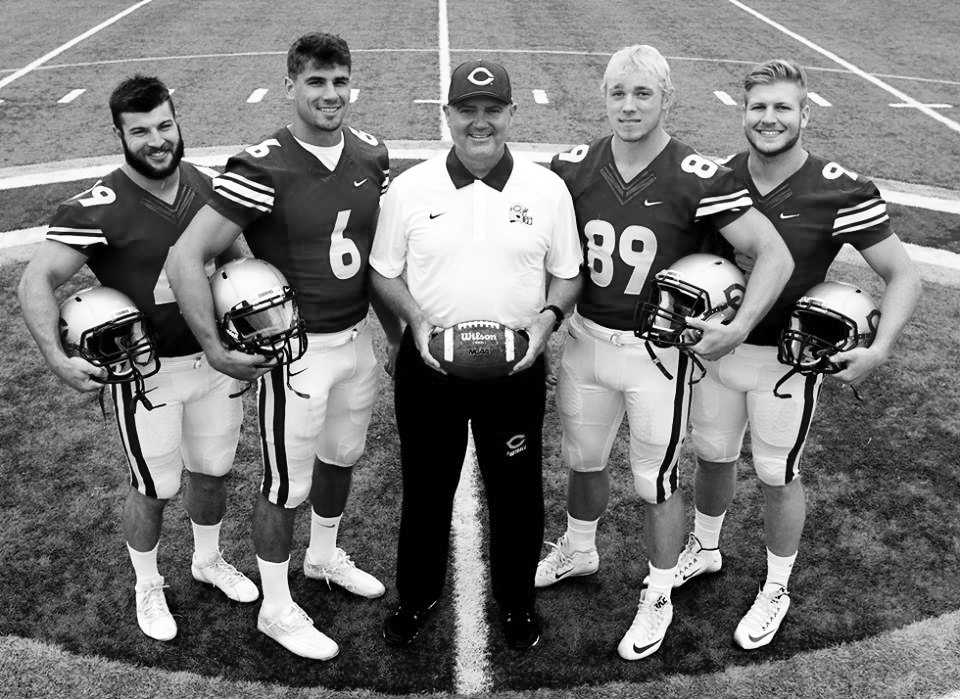 The 37-7 win over the St. Olaf Oles not only marked the third win of the season for the Cobber football team, but also win number 100 for the career of Head Coach Terry Horan.

When Horan took over head coaching duties of the football team in 2001 from Jim Christopherson who retired after 32 years of coaching at Concordia, he became only the eighth coach in the program’s 96-year history. With the win, Horan becomes the third Concordia coach to win 100 games joining Jake Christiansen (143 wins) and Jim Christopherson (218 wins).

“To be in that select group makes me proud,” Horan said.

“15 years has been a blur,” Horan said. “Every victory has been sweet.”

Horan refuses to take sole credit for his success as head coach, saying that it is a team record resulting from a combination of great student-athletes and coaches.

Defensive coordinator Kyle Bakken is in his eighth season as a member of the Cobber football coaching staff, and has been around for roughly half of the wins. To him, the success Horan has had while at Concordia is not solely because of great student-athletes, but also because of a consistent coaching staff.

“You have to have the right people around you,” Bakken said of Horan’s milestone win. “It’s huge not having staff turnover.”

According to Bakken, the consistency among the coaching staff is a testament to Horan’s leadership.

Horan is a 1989 graduate of Concordia College and has a vibrant passion for the school that helps with recruitment, according to Bakken.

“He’s got the personality that clicks right with families,” Bakken said. “[Horan] doesn’t try to sell Concordia on what we’re not.”

Senior linebacker Austyn Raftevold describes Horan as a coach that cares about his players both on and off the field.

“He is willing to put you first in everything he does,” Raftevold said. “He always has an open-door policy to his office and everyone on the team feels comfortable talking to him about anything.”

“You’re not just a player to him,” Bye said. “The team is his family and he’d do anything for the guys here. That’s what makes him a special coach.”

Horan’s leadership hasn’t gone unnoticed by his MIAC colleagues either.

“[Horan] loves his players and asks them for a lot!” Steve Johnson, head coach at Bethel University said in an email interview. “Consequently they play hard and together. Concordia is always tough to play because of that!”

Johnson is in his 27th year as the head coach at Bethel. Over his tenure he has exceeded 190 wins.

“The thing that’s impressive and rewarding about 100 wins is that [Horan] has stayed with it at his school and built toughness, confidence and community,” Johnson said in his email. “It takes time to build that culture and trust. It is destroyed quickly.”

Tradition, pride and success come to mind for Horan when describing the program, and winning 100 games is a direct reflection upon that.

“It means everything,” Horan said of Cobber football and its values. “I think the milestone speaks success for our program.”

For Bye, being on the team that won Horan his 100th game is an honor, but also a testament to previous teams.

“It feels even more special to be able to get it for all the guys that came before us,” he said.

Raftevold said that the experience was exciting.

“I think it speaks volumes to all the hard work and time that both former and current players put forward in order to win,” he said.

The biggest accomplishment Horan feels is knowing that his coach, Christopherson, would be proud of where the program is now.

“We’re happy where we’re at,” Horan said. “It’s a great place to coach. Our roots are here.”