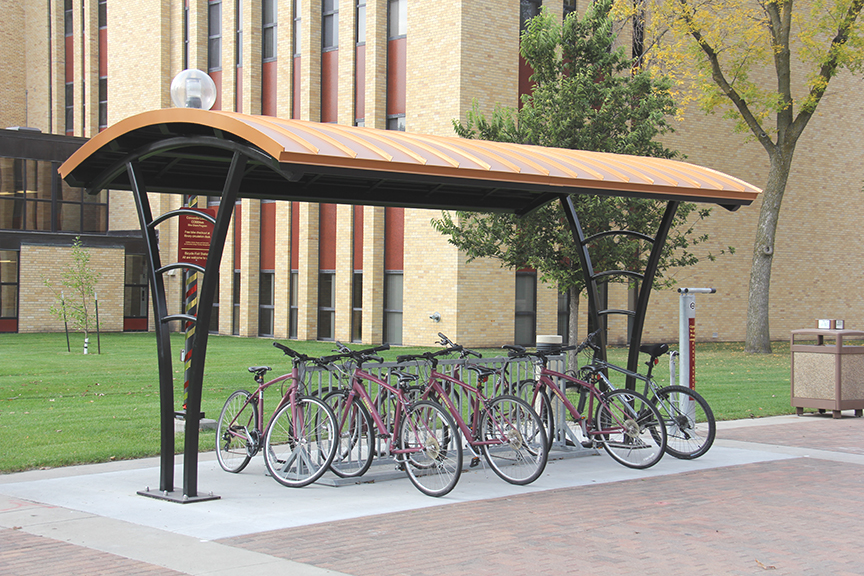 A bike shelter for COBBikes with a fix-it station for everybody’s use was installed outside of Knutson Campus Center this summer. The shelter was made to house the bicycles and to act as a landmark for where they are located.

COBBikes is a bike share program that was initiated last year after being suggested by students to a few members of President William Craft’s sustainability council. The program allows Concordia students to go to the Circulation Desk in the library and check out a bicycle for up to six hours. Students can utilize the bikes and then store them in the new bike shelter after they are finished.

Dr. Ken Foster, chair of the president’s sustainability council, said the program has been extremely successful.

“It was a typical example of a student initiative that was facilitated by faculty to help students achieve their goals,” Foster said.

According to Circulation Interlibrary Loan Manager Leah Anderson, there were 1,731 checkouts last year and 365 checkouts since the beginning of this academic school year through Oct. 1.

The bike shelter was proposed at the same time as the bike share program but was built in the winter when Facilities Management had more time to work on it. The shelter was constructed instead of purchased in the interest of saving money and being a custom-designed structure, according to Foster.

“The people in facilities who made it, have done outstanding work,” Foster said. “It’s such a luxury to have them build it instead of having to buy it.”

Wayne Fleck, director of Facilities Management, said the design process began in the fall of last year. Fabricator Ron Sauvageau prepared construction drawings and started building in February. Sauvageau then installed a rib-caged bike rack and its roof this summer, along with a fix-it station that contains tools such as an air pump, screwdrivers and differently sized wrenches.

Although the bikes are for student-use only, the fix-it station is available for anybody who needs to restore his or her bicycle, whether that be a professor, a student or someone simply biking through campus.

Sophomore Alan Scheuermann used COBBikes last year when he did not have a bicycle. This year, he has used the fix-it station for routine maintenance.

Scheuermann said the fix-it station has a good variety of tools but is difficult to work with because of the cables that connect each tool to the station, limiting mobility of the tools.

“You can’t really maneuver them as well,” Scheuermann said.

Ron Sauvageau said the stainless steel cable connectors are necessary so that people do not walk off with the tools.

Junior Grace Bateman also found the new station and the COBBikes program to be convenient, but said that last year, it was difficult to check out a bicycle.

“Half of the time, all the bikes were checked out,” Bateman said.

According to Anderson, students are generally good about returning the bikes on time. There are only 12 bikes in the program right now. There is currently no fine for late returns. Only one student was charged last year when his or her bike was never returned.

Foster said that although there are 12 bikes in the program, there are usually one or two that are unavailable because they are under repair.

After two years, statistics on the demand of bikes will be studied so that Foster and Samantha Hill, sustainability coordinator, can decide whether or not to expand the number of bikes in the program. For now, students are enjoying the new shelter and bike program.

Katelyn is a senior double majoring in Multimedia Journalism and Communications. She's been apart of the Concordian team for three years, and plans to travel as much as possible after graduating in December.