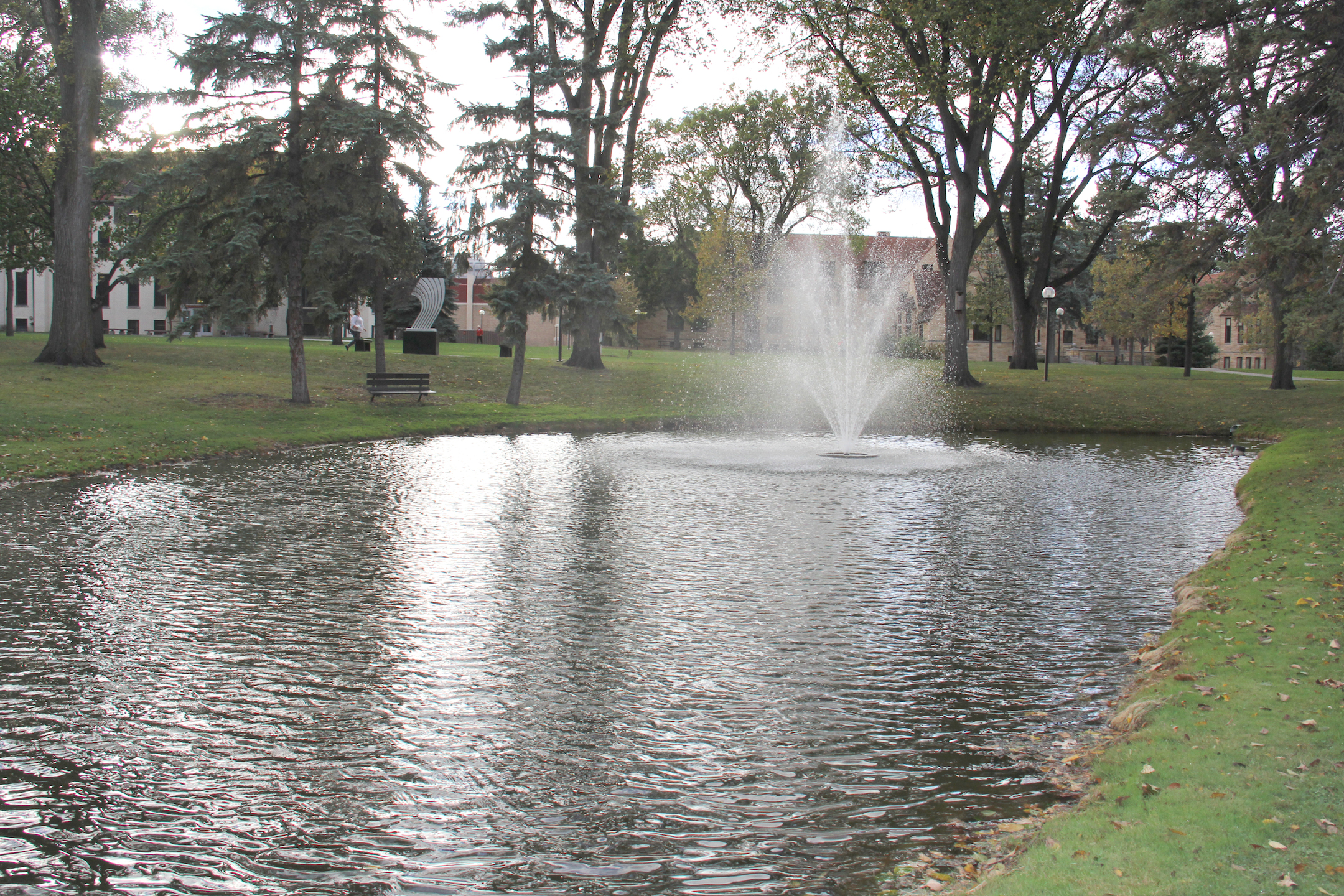 Prexy’s Pond is not natural; its water comes from the city of Moorhead.

An underground irrigation line from Fjelstad Hall fills Prexy’s depths. When Prexy’s needs to be filled, a valve box opens up, dispersing water into the pond.

“It’s the same principle as filling a pool,” Raguse said.

The water that fills the pond is the same water that spouts from drinking fountains on campus, although drinking it out of Prexy’s is not advised, according to Michael Snelgrove, groundskeeper.

The pond is like natural ponds in that it has microorganisms, said Dr. Michelle Marko, associate professor of biology and co-director of environmental studies program. Still, the pond is a landscape feature rather than a natural pond.

“The water coming from the city should not pose a problem [to the environment],” Marko said in an email interview. “They don’t use too much chlorine in city water, most of which will evaporate within 24 hours after being added.”

Although a main source of water is through the city, heavy rains contribute to the filling of Prexy’s.

How often Facilities Management fills the pond depends on the weather conditions. In the summer when the temperature is higher, more water evaporates, so facilities pumps in water more often. Wind decreases the amount of water in the pond by catching water droplets from the fountain and blowing them elsewhere. When the pond needs to be replenished, facilities opens the water pipeline where water trickles into the pond at the rate equivalent to a running garden hose.

Since the general maintenance funds bundles all costs, the cost to fill the pond is unknown, according to Raguse.

Classes such as Environmental Studies 103, Biology 221, Biology 409 and Ecology test the water in Prexy’s about once per year.

Marko said that in the past, they have found invertebrates living in Prexy’s, which shows that the pond can sustain some life forms. The city water can affect what kind of life forms that can be sustained.

If Concordia decided to make Prexy’s a more natural pond rather than a landscaping feature, some changes would need to be made.

“[To] increase its ability to function more naturally, include more vegetation around the pond,” Marko said as one example as a change to be implimented.

Prexy’s Pond does have important functions in the ecosystem. Prexy’s catches excess runoff water that could flow into the Red River.

“That [Prexy’s catching excess water] holds back nutrients and sediment, all of which can harm the river,” Marko said.

The pond also supports the exchange of different types of matter back into the environment.

“The pond’s fountain serves the purpose of not just looking nice, but keeping out anaerobic bacteria,” Raguse said. “It circulates the water.”

Anaerobic bacteria are a type of bacteria that cause the pond to smell.

Facilities will soon take the fountain out of the pond in preparation for winter weather, and will return it sometime in May.

Other maintenance tasks of Prexy’s include mowing or weeding around the pond, removing the scum and cleaning the filtration system when the fountain malfunctions.

“It’s an icon for Concordia,” Raguse said. “It visually adds some interest to the landscape.”