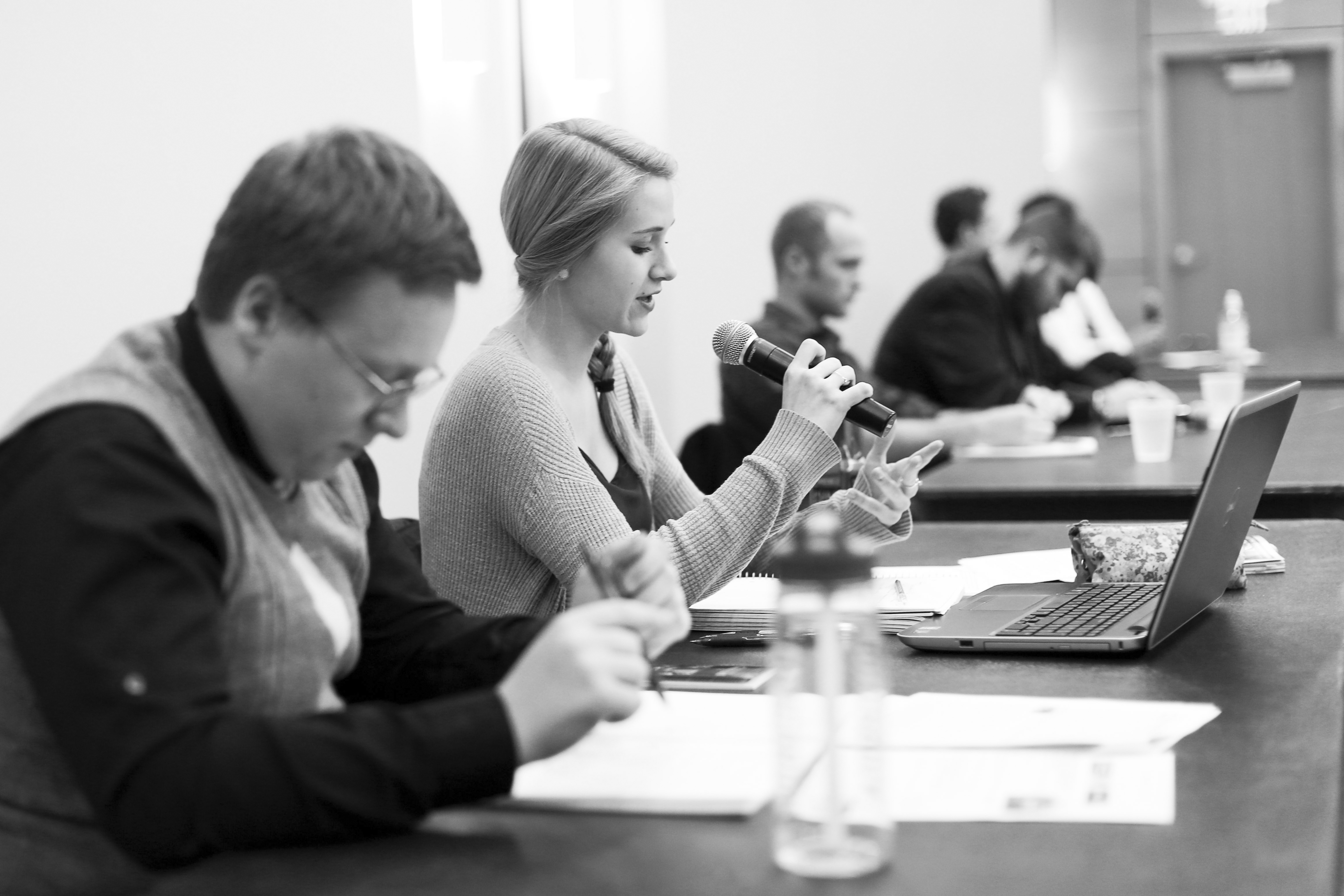 From comparing gun control with the practicality of rubber duckies to discussing how to intervene with the Syrian crisis, stu­dents utilized statistics and experiences to state their positions on various political af­fairs.

To start off Civic Engagement week, SGA hosted the Campus Political Debate this Mon­day in Jones A-B from 8 p.m. to 10 p.m.

“I wanted to see another perspective brought onto the political spectrum so people know that it’s not just a left or right agenda,” Lane said. “If people were to see another per­spective, they could know that there could be a range between each perspective rather than you’re on one side or the other, or you just don’t agree with them.”

The debaters addressed four topics — Planned Parenthood, the Iran deal, gun con­trol and Syria. For each topic, Lipp would ask a few questions in which the debaters could give their answers; then they could rebut­tal and the audience asked their questions to wrap up the discussion. Gun control and Planned Parenthood proved to be the most heated topics, with interventions from Lipp to settle disagreements to long lines of students standing by the mic to ask questions.

The next topic was Planned Parenthood — a heated debate. Lipp asked whether fed­eral money should be prohibited to funding Planned Parenthood or not. Libertarian De­gerness stated that defunding Planned Par­enthood would not help because the funds for that program would go elsewhere. Liberal Christiansen supported funding the program whereas conservative Nuhring said the pro­gram should be defunded because it is self-sufficient.

The discussion moved on to Iran and students discussed whether or not Iran is a threat to U.S. national security. All three par­ties support the Iran deal, in which interna­tional economic sanctions against Iran will be reduced in exchange for Iran ending its pur­suit for nuclear weapons and diminishing its supplies of enriched uranium.

Lastly, the panel focused on gun control. Students discussed whether or not regulation on guns should exist, addressing background checks and mental health screenings. Chris­tiansen said that more gun control measures should be implemented to prevent more school shootings. According to Degerness, the problem lies within locations the govern­ment has delegated as gun-free zones because these areas highlight that people do not have a method of self-defense.

Rose and Nuhring both stated that they support common sense gun control which includes background checks and mental health screenings.

Even though some passionate arguments did arise, Lane believed the event went well.

“There wasn’t a lot of hostility,” Lane said. “People were generally civil in their dis­course.”

“I think all three parties actually came to­gether and we saw eye-to-eye more than we expected,” Nuhring added.

“I know this has been the best political event I have been a part of while at Concor­dia,” Lipp said. “I’m glad we were able to adapt to what students want to talk about. I think it’s pretty exciting to see a room full of people at 10 p.m. on a Monday night talking about political issues.”

Lane began coordinating this event in Au­gust with Jesse Partee, SGA civic engagement representative, and Jasmine Lara, SGA pro­grams and events commissioner. Lane said he became invested in this event due to his inter­est in the debate and the cancellation of the debate last year due to disorganization and last-minute planning.

“I attended that event [the Campus Po­litical Debate] as a freshman,” Lane said. “I was really engaged and interested in what the conversation had to offer. The following year, it didn’t end up happening. … This year, I de­cided that I wanted to make this event suc­cessful.”

Choosing the debaters turned out to be harder than expected, according to Lane. Lane said he wanted to table in the Atrium to draw interest, but members of SGA advised him against it, stating that people that are in­terested in the event will come to him. Thus, he created an interest meeting to see who these people would be.

“Exactly six people showed up at the event [the interest meeting], and that was the num­ber of debaters I needed,” Lane said. “And exactly two people from each position were willing to debate.”

To prepare for the debate, Nuhring and Rose said that they did their research, but never met before the debate to discuss their findings and how they would address each topic.

“I didn’t want this to become a mud-sling­ing event where I’m throwing out statistics and they’re firing back,” Rose said.

“I don’t think that’s what we need, anywhere.”

The issue at the time was that all debat­ers were male, unequal representation of the campus population, Lane said.

Closer to the event, one of the original debaters had to withdraw his position at the debate, in which Palagi stepped up to the plate — one female representative.

Palagi felt comfortable being the only fe­male representative.

“Since I participated in high school debate with a male classmate, I’m more used to be­ing the only female debating than not,” Palagi said in an email interview. “I felt comfortable interjecting on points during discussions on Planned Parenthood because my perspective on specific women’s healthcare issues was much different than some of my male coun­terparts in the debate.”

Lane hopes to change the strategy of re­cruiting for next year to obtain better repre­sentation.

Finding the moderator turned out to be a fortuitous find. Lane had originally ap­proached Lipp to ask if he would be a debater since he debated in the 2013 debate. Lipp voiced that he would rather moderate the event.

“It was a debate [in regard to the 2013 debate], and it was fun and it was ‘I’m right, you’re wrong’ kind of thing,” Lipp said. “But this was a different tone, and I think it was a better tone. “The turnout was better here.”

Picking topics to discuss proved to be a long task, according to Lane. At the interest meeting, Lane asked the debaters what they would like to talk about. Lane brought the list to Partee, Lara and Lipp; they narrowed it down to the four topics.

“Planned Parenthood and gun control were brought up as internal issues because they’re relevant today due to legislation,” Lane said. “The Syrian topic is largely due to the refugee crisis and all the wars going on — it’s really relevant to what’s going on in the world. The Iran deal is related to that [the Syrian crisis] and we think that it’s related to U.S. foreign policy in terms of legislation.”

Senior Tyler Aldous attended the campus debate. He believed that the debate would had been better if the conversation was longer and more focused.

“Putting foreign policy was probably not the best idea because it was tough for some of the students to relate,” Aldous said. “Even some of the panelists couldn’t answer some of the questions.”

Lane hoped that students came out with a new perspective from the debate.

“I find that often — left or right — when people talk about politics, they have a leaning bias,” Lane said. “They stand on that fence, regardless of what topic matter gets thrown at them. I would like to see somebody — from either side — question their own beliefs on the subject matter so we have more thoughtfully engaged students that have defense for why they think this way.”

“I think what we need is this standard conversation where we can be heated about things like Planned Parenthood and then realize, ‘oh, we have very similar views on things like gun control and the Iran deal,’” Rose said. “Because of the Planned Parent­hood thing, we don’t ignore those similarities. I think that that’s what we’re having a lot in this country right now — small disagreements that can lead to complete obliviousness in other topics.”

Due to the success of the debate, Lane hopes to host another debate in the spring with a similar format but with different topics and participants.

“Events like this need to happen on cam­pus more often in which people are engaging on various perspectives with regards to is­sues rather than having a singular perspec­tive being taken,” Lane said. “It would drive our campus more in terms of civic engage­ment and being responsibly engaged with the world.”