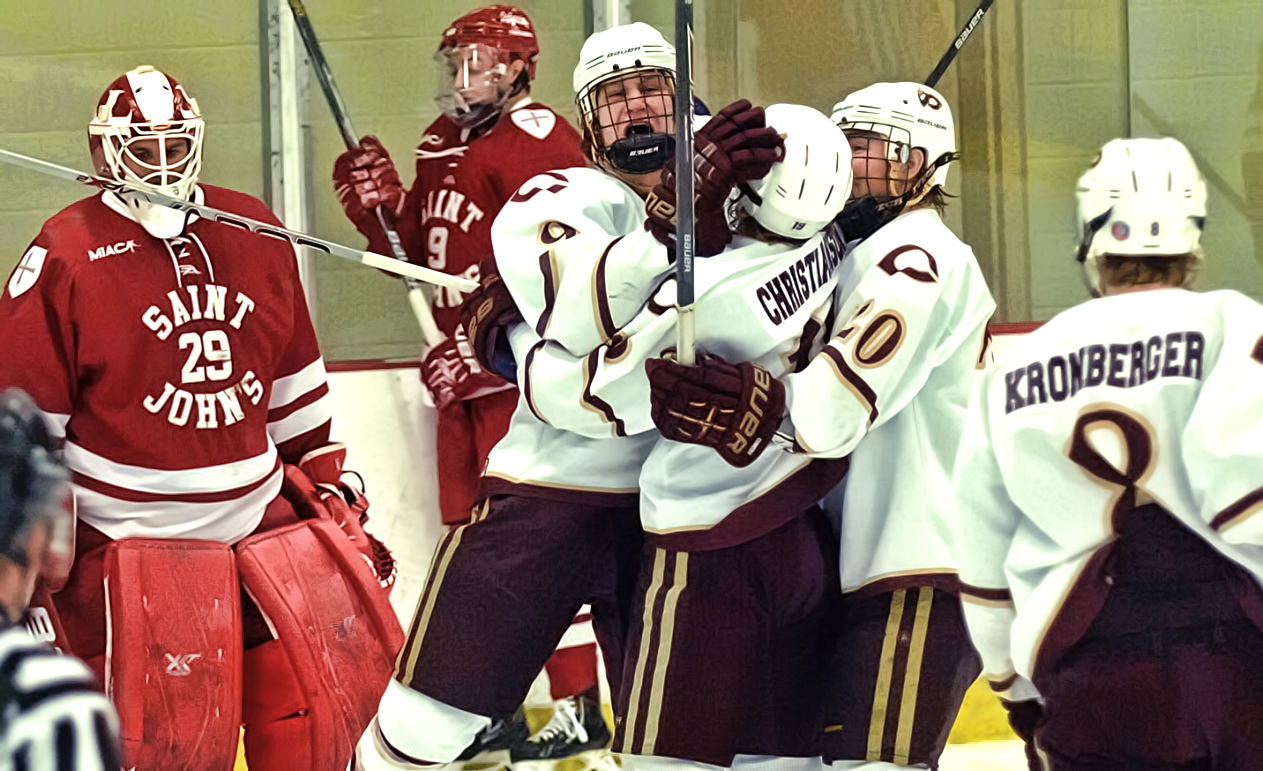 Campus is covered with an array of auburn and gold leaves as the temperatures continue to decline. With the end of fall and winter soon approaching, that can only mean one thing: hot chocolate, scarves, mittens — hockey.

Even though the ground is lacking in the snow department and it may not feel like hockey weather, the men’s hockey team has started their season and hit the rink.

“To start the season, we had pretty high expectations,” senior Charlie Aus said. “We got some returners that have been a big part of our team.”

While a number of the team’s returners bring major contributions, they graduated one of the team’s main leaders, back-to-back MIAC All-Conference recipient Andrew Deters. During last season, Deters led the team in scoring with 10 goals and 18 assists for a total of 28 points. Losing that type of offense leaves big roles to fill for returners and newcomers.

“Obviously Deters was a huge loss,” said senior Tucker Corbon. “Not just because of his on-ice performance, but the way he led the team off the ice. He is an irreplaceable guy.”

“Deters, Deters—Captain America. He was a very large part of our team,” Aus said. “He has been the pioneer, kind of, in a new direction to the type of players, relationships, and attitudes we want on our team.”

To be prepared for the loss in offense, the team increased their off-season preparations.

“Coach Howe expected a lot out of us. He gave us a pretty good workout plan,” Aus said. “And for the leaders, he kind of brought us together and told us to stay in touch with the other players, keep them accountable.”

The captains weren’t the only ones keeping people accountable. The whole team knew what they needed to do to be prepared for the upcoming season.

“Everyone pushed each other to work hard all summer,” Corbon added. “Whether it was running, shooting pucks, lifting or skating. Our goal this summer was to do something every day to improve.”

While the team is only four games in, they have already had some significant injuries that may lead to setbacks early on. Corbon is one of those that was recently in the hospital for a fractured bone in his shoulder.

“I’m expecting to be back after Christmas break,” Corbon said. “But I’m hoping I can speed up the recovery by doing anything possible to heal quicker.”

Corbon is not the only one suffering from injuries early on. According to Aus, Jordan Krebsbach, Corbon’s defensive partner, is supposedly out with a concussion along with Corbon’s younger brother, junior Sam Corbon who is out due to injury as well.

“We are a couple games in and three players down, which is difficult,” Aus said. “I think we got enough guys that are willing to step in and try and fill some rolls. So it will definitely be a big test.”

While off-season preparation may have a hand in the 3-1 record that the team currently holds, the team has had some real contributions from its freshman line.

“We have a really deep group this year,” Corbon said. “The freshman we brought in have fit into our style have and have really bought in.”

“We can already feel their contributions just after the first couple games,” Aus said. “There was one line [during a game] that was full of freshman and they did really well.”

Although it is early in the season, rumors have been floating around that the men’s hockey team will be fairly successful this season and according to both Corbon and Aus, their team’s goals for the season show their intentions.

According to Aus, these lofty goals are not all that out of reach. Last season the team went out East and played in the PrimeLink Great Northern ShootOut Tournament where they beat the number 5 and number 2 teams in the country. Knowing that the team has pulled wins against those highly ranked teams leaves them believing anything is possible.

With high confidence, comes high responsibility, and to achieve the goals that the team has set, it won’t be a walk in the park.

“We have quite a bit of confidence in ourselves and feel like anything is possible,” Aus said. “We have a lot of talent and everybody is really excited which was kind of a problem the first weekend.”

According to Aus the team went into opening weekend hoping to slide by on their skill alone, which found them thinking otherwise after their 4-2 loss against St. Olaf, Nov. 1.

“We’ve been trying to get back to that hard work mentality,” Aus said. “You learn from it like okay yeah we are good, but you obviously still need to come and work hard to get things accomplished.”

With hard work in mind, the team has a rigorous road ahead of them with the most pristine goals to keep them.