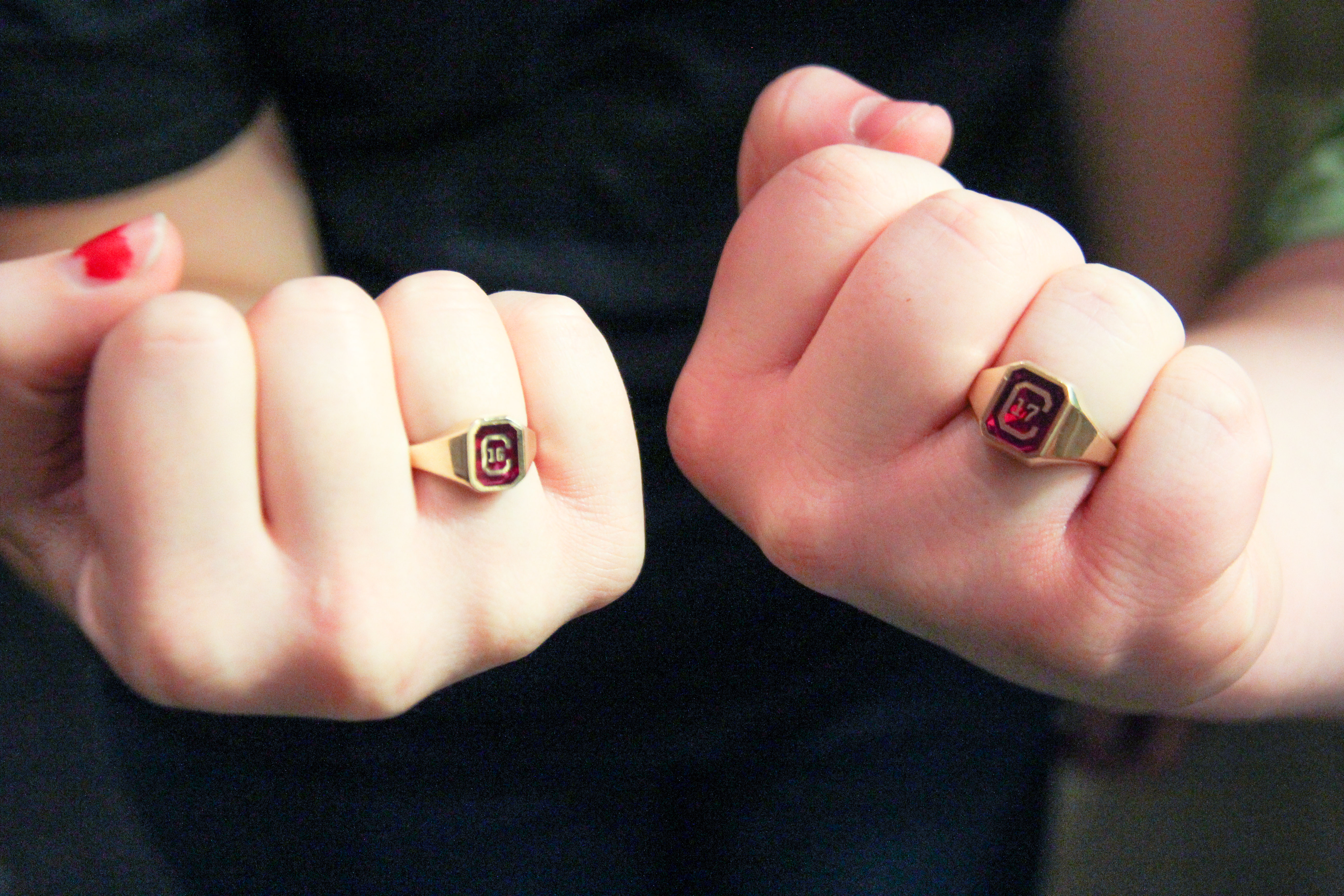 It is always a great day to be a Cobber, especially during Concordia’s Cobber ring day. This year’s ring day, however, was not a celebration for every student who ordered a ring. Several students had to send their rings back to Jostens to be fixed or resized, which means they will have to wait an entire month before they can celebrate getting their ring.

“When I opened up my box, I realized that I had a men’s ring, so the face was much larger than it is for a women’s ring, but other than that everything was fine. It fit and my name was engraved in it, but it was huge,” senior Sydni Kreps said.

Of the 351 rings that were ordered for the Cobber ring event, 33 of them had to be sent back to Jostens to be fixed, according to PJ Hines, director of the bookstore. Students’ rings had issues that ranged from being too large or too small to being the wrong gendered ring.

“When you originally get your ring, you want it to be perfect, so we always hope that…when someone tries their ring on, it’s perfect for them,” Hines said. “It’s just disappointing that we had 33 rings that we had to send back.”

Nine of the rings were sent back due to what Jostens called warranty services, including incorrect spelling on an engraving or a stone set at an angle. The other 24 rings were sent back for resizing; 12 these were due to errors on Jostens’ part. The final 12 rings needed to be resized a quarter- or half-size difference, say where someone ordered a six but really needed a six and a half, according to Hines, who received this information from Jostens.

Despite this setback, Jostens came prepared and remained stationed at a table in the Centrum throughout the day to help students send their rings back if they had issues.

“There was a pretty long line of people who had problems with their ring, but I think I was…the only one that had the whole men’s versus women’s ring mess up,” Kreps said.

Senior Tate Nelson had problems with his ring as well.

Thirty-three issues is not uncommon, however. According to Hines, it is consistent with previous years.

“[Jostens] went back and looked at their 2015 stats compared to ’13 and ’14, and it is consistent with those [numbers],” Hines said. “They were disappointed that they had issues with that many rings, as well.”

But not as disappointed as the students who came to the Cobber ring day event only to find that their ring was not what they had expected.

“At first I was pretty bummed, but mostly because you are standing there in a room full of people who are so excited that they have their ring, and everyone is running around and taking pictures, and I was standing there with my box [thinking], ‘Okay, this isn’t ideal,” Kreps said.

To remedy the issues with Cobber rings, Jostens prioritizes the Concordia account for the Cobber ring event. Any ring sent in for repair or resizing will be returned in three to four weeks, rather than the standard six to eight, according to Hines.

“We are the second leading private institution for Jostens in the United States, so that’s pretty exciting. Jostens does take excellent care of us,” Hines said. “Concordia has a great warranty in place with Concordia rings. When you buy a ring, you have a lifetime warranty for both resizing and repair. For the rest of your life, [Jostens] will take care of it for you.”

For Kreps and the other 32 students, this care was put to good use.

“It’s not the end of the world. I get my ring in a month and mistakes happen, so I’m not angry,” Kreps said. “I’m definitely excited to get [my ring] in December.”

This expedited care and continued service is evidence of what the rings mean both to the college and its students.

“It was kind of the symbol and it represents Concordia. Having it… [describes] who you are: a Cobber,” Nelson said. “I’m thankful that I have the opportunity to have one — I am excited for when it comes in. It will still be a great moment.”

For some students, the decision to purchase a ring is a difficult one due to price, but 351 students thought that a Cobber ring was worth the investment.

“It was a really tough decision. Ultimately, it came down to that a lot of close family friends growing up had the ring, and it was something that I had always looked at and admired, and, now that I’m here, I decided that I wanted to invest in one, mostly to remember my time here,” Kreps said. “It’s a way … to look back at the four years that I spent here and all of the incredible relationships that I’ve made.”