History of the Christmas concert mural 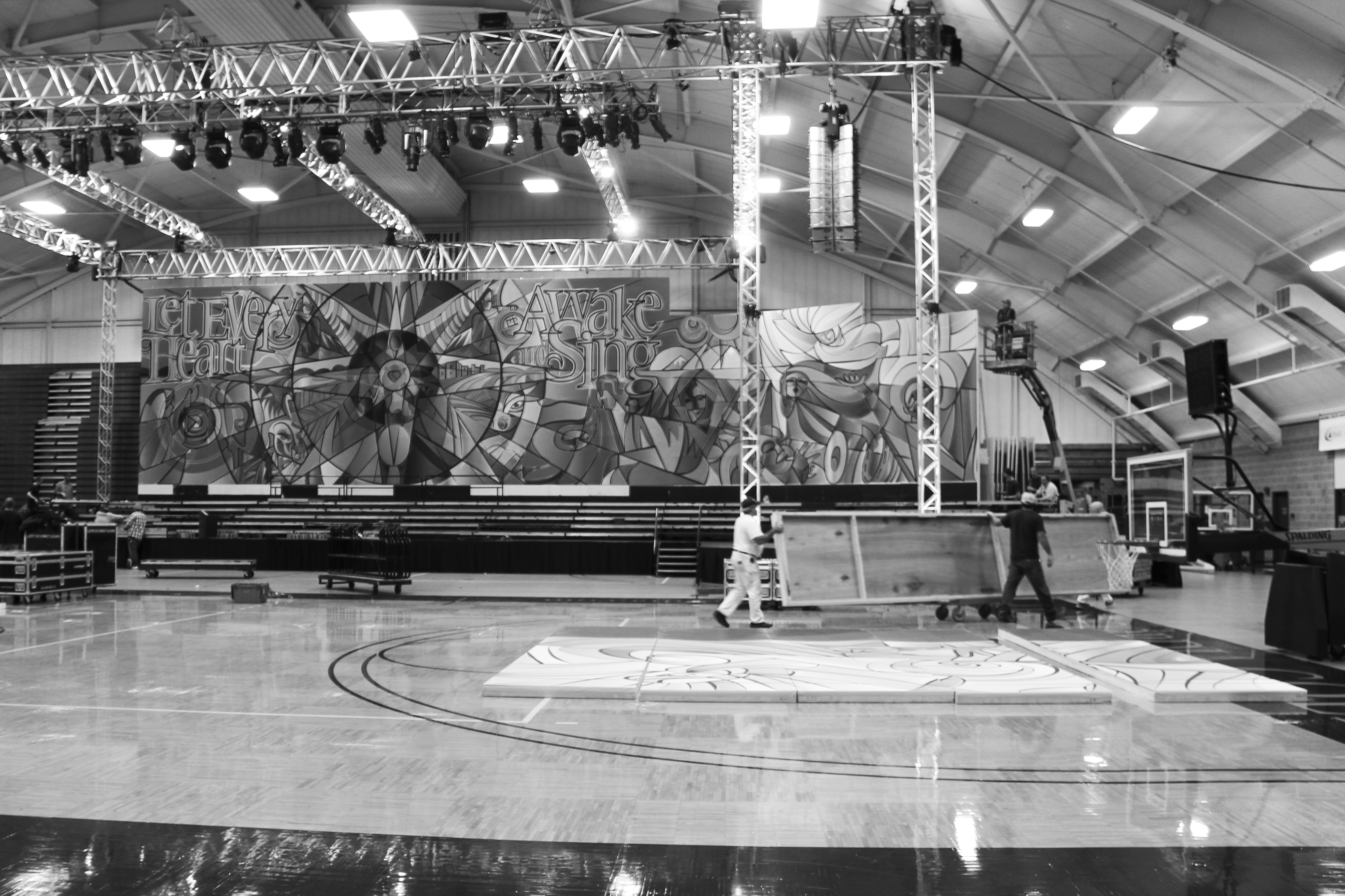 Before Paul Johnson began digitally designing the mural for the Concordia Christmas Concerts, students, faculty and other volunteers had to paint the mural by hand.

Since 2009, Johnson has created a digital file of the mural and printed it onto large strips of wallpaper. The design is then pasted onto 44 panels that make up a 176-by-24-foot mural.

First, Johnson meets to discuss the theme of the upcoming concerts with choral directors René Clausen and Michael Culloton, with choral manager Gordon Moe and with campus lighting director Bryan Duncan. Clausen provides the group with a selection of music that will be included in the program, which is where Johnson finds his inspiration.

“I look up every hymn, read every hymn five, ten times, and I start looking at connections,” Johnson said. “I write down interesting phrases, things that just give me an idea visually, and I just keep going back and forth, back and forth, and then I start sketching.”

Johnson draws his ideas on paper and then traces his favorite parts of each sketch onto acetate, a transparent paper. That design is scanned into Illustrator, a graphic design software, and then filled in with color. The entire process takes about four months, according to Johnson.

“Between July and Oct. 15 I’m working on it just about every extra second I have,” Johnson said.

Johnson is the fourth artist to design murals for the Concordia Christmas Concerts.

Cyrus M. Running created the first backdrop for the concerts in 1940. It consisted of blue fabric draped behind the choir and a single star hanging above the ensemble.

Running, an art professor at the college, worked with choral director Paul J. Christiansen to integrate art, music and text into the Christmas concerts.

He contributed artwork to the concerts until 1973, when Paul Allen began designing the mural. One year, Allen created an entire mural with pointillism, or many tiny dots. Because the technique was so time-consuming, the mural was finished the night of the opening concert.

In 1978, David Hetland took over. Hetland used a paint-by-number system and relied on volunteers to help paint the mural each year. He put advertisements in The Fargo Forum and asked for members of the choirs to help paint as well.

Johnson was a student at MSUM, but took Greek classes at Concordia. After graduation, Johnson worked for Hetland as a graphic designer, and also contributed to the Concordia Christmas Concert murals.

After Hetland passed away, Johnson applied to become the new muralist. He already had experience creating murals in a digital file, but on a much smaller scale.

He remembers interviewing for the position.

“I said, ‘If you want a traditional painter, I’ve got to bow out now, because I don’t have time to do that,’” Johnson said.

Johnson was selected and he became the first artist to create the mural digitally.

A digital design meant that more last-minute changes could be implemented, but it also posed certain challenges. The first few years, Johnson and a group of volunteers stapled or taped the wallpaper to the panels, rather than using paste, causing the paper to sag. Fortunately, Johnson was able to address that issue by pasting the wallpaper onto the panels.

The theme of the 2015 Concordia Christmas Concert is “Let Every Heart Awake and Sing.” The mural serves to reflect this theme.

To portray this message, Johnson created a mural with a variety of images. A few images included rolling waves, angels and a compass-like star. The lines, “From east to west,” “From shore to shore” and “Let every heart awake and sing,” influenced the design.

Although the mural is no longer painted by hand, in order to be completed it still needs the help of volunteers. Moe organizes groups of student volunteers from each choir to help paste the mural onto the panels.

“When I think of this year’s mural, it’s kind of this concept of awakening,” Moe said. “It’s almost sunrise-like and it’s expansive in the sense that we wanted to capture this ‘from east to west and from shore to shore.’”

Moe is a Concordia College alumnus who was once the student manager of The Concordia Choir. He remembers when the mural was a paint-by-number and even organized a competition one year to see which section of the choir could spend the most hours painting the mural.

Moe said he has enjoyed being a part of the Concordia Christmas Concerts at various levels, including singer, painter and organizer. He looks forward to seeing the new mural each year.

“Seeing the mural in the space, when it’s all completely up, that’s always impressive because each year [Johnson] does something unique,” Moe said. “It jumps off this small computer screen onto a monstrous format. The next time it’s exciting to see is after Bryan Duncan illuminates the mural. His application of different colors can change the look and personality of the art.”

Lily Erdal, Moe’s assistant and member of The Concordia Choir, volunteered to wallpaper the mural last year and said it was interesting to participate in some of the behind-the-scenes work.

Erdal said the mural enhances the storytelling feature of the concerts. She has seen a digital copy of the mural and described the compass-like star in the center of the mural as a significant part of the artwork.

“There’s that center portion that radiates out, so in a way I kind of see that as like the spreading of the word and the message of the Christmas concert just right there in the heart of it,” Erdal said.

Erdal, Moe and Johnson look forward to seeing the mural lit up before an audience.