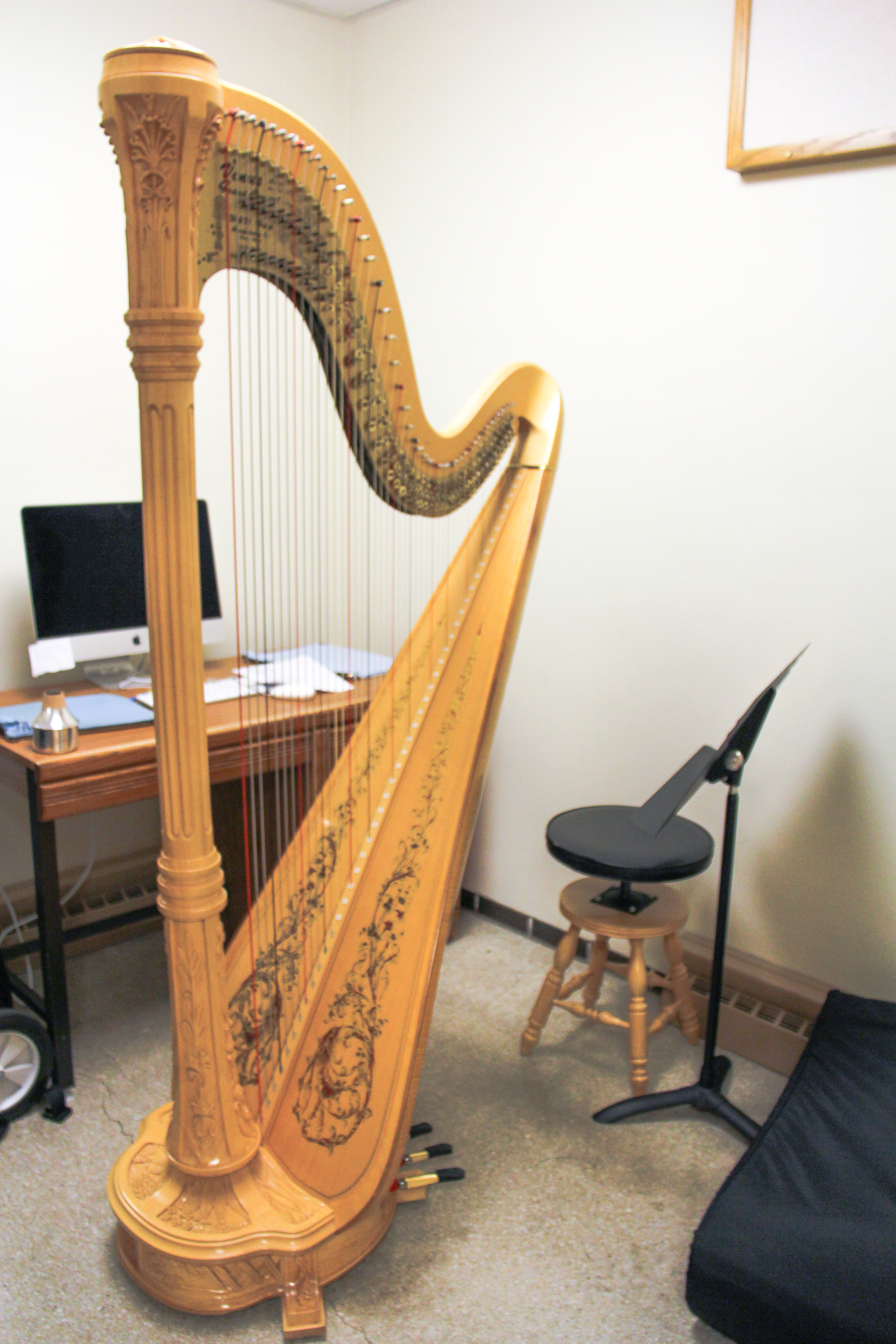 Concordia hires a new harp professor and receives the instrument after reaching out to the community.

Concordia’s notable music program has been taken to another level this semester.

For the first time in over five years, the music department has reinstituted a harp program. It is now in full swing again with a new harp instructor, two harpists and a recently donated a concert grand harp.

Nikki Lemire, harp instructor, is currently teaching her first semester at Concordia. She was hired over the summer after freshman Helen Hill showed interest in playing harp at Concordia to continue her studies on the instrument. PSEO student Emily Lech from Moorhead High School was informed of the new instructor when she enrolled in classes for fall semester and also signed up for lessons.

“[Concordia faculty] were very understanding and helpful with this entire process and I’m grateful that they didn’t put the load of finding a harp or harp instructor on me,” Hill said.

Lemire began learning harp when she was two years old and played in her first recital at two-and-a-half years old. She studied harp performance at Augsburg College with Kathy Kienzle, the principal harpist of the Minnesota Orchestra. Lemire went on to receive her master’s in music of harp performance at Northwestern University in Illinois. There, she studied opera with Elizabeth Cifani, who is the former harpist of the Lyric Opera of Chicago.

Lemire currently plays harp with the Fargo Moorhead symphony, the Duluth Superior symphony and the Minnesota Opera, along with several small community orchestras and choirs.

“I enjoy accompanying the choirs a lot,” Lemire said in a phone interview.

Aside from Concordia, Lemire teaches at MacPhail Center for Music in Minneapolis.

“I have a rather large studio there where I teach kids and adults,” Lemire said in a phone interview. “I have a few students in the Fargo area as well.”

Hill and Lech are both receiving lessons from Lemire for one hour every other week. Because Lemire lives in Minneapolis, their lessons alternate between one on-campus and one over Skype. Normally, freshmen take half-hour lessons every week, but Lemire’s location and schedule only allow for every other week lessons.

“[Lessons over Skype] are fine, but we always have problems getting Skype to work for some reason,” Lech said. “It’s nicer to have Nikki here but getting her lessons, if we can do it on Skype, is better than nothing.”

This is Lech’s first year ever taking harp lessons. While she had attended music camps in the past, she was mostly self-taught.

“It’s wonderful having a teacher there to push me,” Lech said.

Dr. John Roberts, chair of the music department, said that after there were interested students and an instructor, there was a demand for a harp.

“The pedal harp I was renting was old and wouldn’t last the commute [from Mankato to Moorhead], and [Concordia faculty] informed me that they were trying to find a harp,” Hill said. “When I got here, I was notified that they found one.”

According to Roberts, Jon and Lori Wanzek of Fargo donated a Venus concert grand pedal harp that had only one previous owner.

“The advancement office approached Jon and Lori and said there was a student who needed this harp and Jon and Lori had children who had played so they knew what it was like,” Roberts said in a phone interview.

Along with the harp, the Wanzeks donated a piece of artwork featuring the Venus harp. The artwork is on display in the main lobby of the Hvidsten Music Building, according to Roberts.

This is the first time Concordia has had a full-size pedal harp, according to Lemire. Lever harps are common, but there are more benefits to playing a pedal harp.

“In orchestras or ensembles, there’s a lot more flexibility having pedals than having levers because you are able to make those sharps and flats with your feet while you play,” Lemire said in a phone interview.

“It’s so fun and so much easier to change keys,” Lech said. “I’m so excited to get better at it and to also be able to apply it in my music classes.”

Lech is playing with the Concordia band this year. She said that because she applied as PSEO, she did not originally think she would be allowed to participate in a band or choir. When she found out that she could, she had to do an appeal to override participation and lesson fees, and then receive permission from Roberts to use the harp.

Now, Dr. Peter Haberman, director of bands, tells her when he would like her to perform with the band. She was able to perform the harp once already this semester and will most likely be needed to play more in the spring performances.

“It was a great first experience in concert,” Lech said.

Lech plans to use the pedal harp to audition for a music scholarship at Concordia next year.

“I’ve always wanted to go to Concordia and I know if I can get in here as an actual college student, I want to be a part of the music program,” Lech said.

Lech said that now that her and Hill have gotten the harp program off the ground as the first harp students, she hopes that it will grow at Concordia as more students enroll and find out about it.

“If anyone wants to learn to play the harp, absolutely do it,” Lech said. “It’s so much fun.”