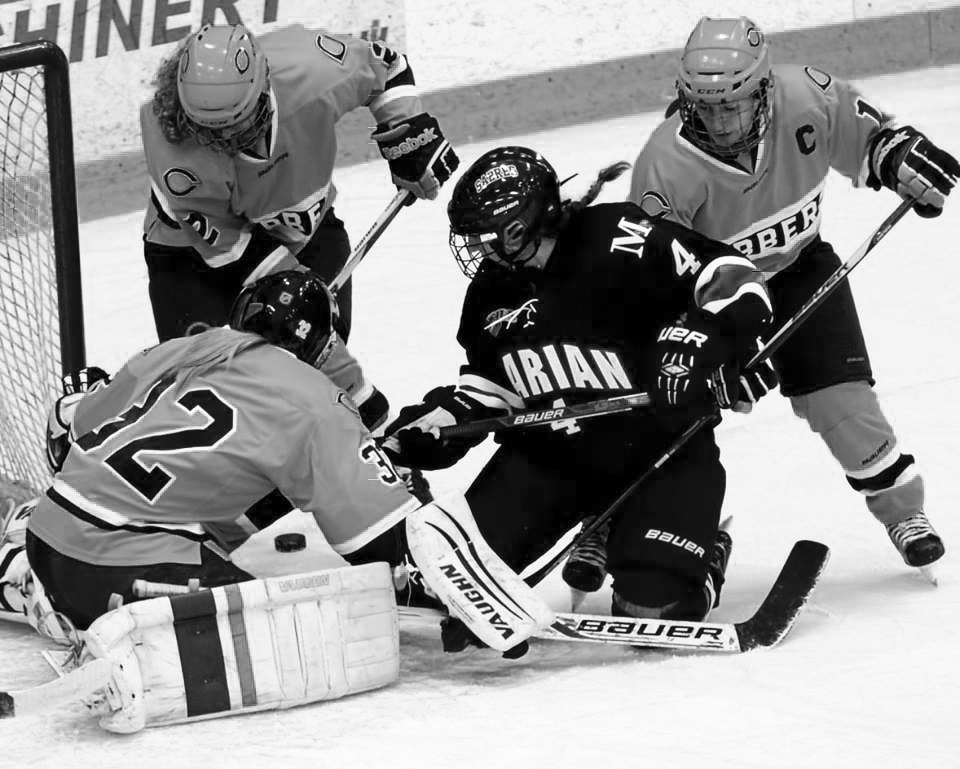 Wayne Gretzky once said that you miss every shot that you do not take. And if you find yourself shooting against Andrea Klug, you miss almost every shot you do take. The Cobber goalie stopped 102 straight shots over the course of 273 minutes in a shutout streak that spanned four games and the first period of a fifth.

Klug’s shutout streak earned her back-to-back MIAC Player of the Week honors, while being simultaneously named to the D3hockey.com National Team of the Week twice during the two-week stretch. But the focus of the team is not just defense.

Shot-blocking and quick transitions have helped the offense find its groove. Through the first three weeks of the season, the Cobber women have outscored their opponents 20-10 allowing all 10 goals during the season-opening matchup against the University of Wisconsin-Stevens Point — a team that at the time was ranked 10th in the nation in the D3hockey.com rankings.

In both games against Stevens Point, Concordia found themselves leading in the second period only to watch the lead slip away later on during the third period. Last year it took Concordia seven games to score eight goals. This year, the Cobbers scored a combined eight goals in their two one-point losses to the Pointers.

The offensive production has been led by junior Jessica Kongelf who leads the team in scoring with five goals and nine points.

“I came [into the season] a lot more confident,” Kongelf said. “Putting in hard work pays off.”

That hard work in the offseason included a lot of weight lifting and work in other areas away from the ice over the summer.

Offensive output has increased for a variety of reasons.

“We are goal hungry,” senior Hannah Johnston said. “We get to the offensive zone and just buzz and do everything we can to get quality shots on net.”

“A lot of our goals haven’t been pretty goals,” she said. “They’ve been hard-working goals.”

Kongelf says that the confidence the team has been playing with comes from experience.

“We’re not afraid to make mistakes,” she said. “We’re playing better because of that.”

Having Klug and her 1.17 goals against average in net helps hide the mistakes that do occur. It also allows the team to be more aggressive on offense.

“She’s a brick wall,” Kratzke said. “We have a lot of confidence in her [that allows us to] make those riskier plays.”

Kongelf said that part of the focus going into the season was to make sure everyone felt comfortable with each other on and off the ice. To build team chemistry off of the ice, the team partakes in a unique tradition called “busaroake,” a variation of karaoke on the team’s bus.

“Each year we have the freshman start out their performances over the bus’s intercom,” Johnston said. “They go up to the front of the bus and just sing — no music playing in the background.”

“She knew every word and all of the actions,” Kratzke said.

Johnston says the seniors have put on the best performance.

“We sang ‘The Climb’ by Miley Cyrus,” she said. “Our teammates turned the flashlights on their phones on and swayed with their arms back and forth. We felt really important.”

The Cobbers entered the season ranked third in the MIAC Preseason Coaches’ Poll behind St. Thomas and Gustavus Adolphus. Concordia was swept by Gustavus and split their regular season series with St. Thomas. The Cobbers clinched a playoff berth but were eliminated after losing to St. Thomas in the semi-finals. St. Thomas went on to beat Bethel University in the MIAC championship game.

The Cobbers finished their season last year with an overall record of 10-13-3 (9-6-3 MIAC) and unmet expectations after the semi-finals loss to St. Thomas.

Klug described the game as a heartbreaker.

“We were hoping for revenge,” she said. “We played a really good game.”

However this year holds the potential for a different outcome.

“Gustavus and St. Thomas are very respectable teams,” Johnston said. “In the past they have been really tough games for us, and I feel that will be the same again this year.”

“When we play Gustavus and St. Thomas we really have to focus,” Kratzke said.

Johnston says that this will not affect how the team prepares for these matchups.

“The MIAC has a lot of great teams in it,” she said. “You could beat a team 10-0 on Friday night and then lose to them on Saturday. You just never know what will happen day to day. This will be true for Gustavus and St. Thomas — we will prepare for them just as we do any other team.”

Klug has confidence in how the Cobbers will match up against the Tommies and the Gusties.

“I feel like we’re pretty compatible with them,” she said. “If we come ready to go we can beat them.”

The Cobbers bring high expectations with them into this season.

“We want to be the first Cobber hockey team to raise a banner,” Gregoire said.

Kratzke said that the team’s first goal is to win the MIAC but the ultimate goal is to “go all the way.”

The schedule this season provides limited opportunities for busaroake performances this season. In addition to the six home games already played, the Cobbers will play 8 of their remaining 17 games at home.

Gregoire says that the favorable home schedule is “nice.”

“[The] girls get to sleep in their own beds,” he said adding that the familiarity of the rink helps a lot too.

This past weekend, Concordia split a home series against Marian University. The Cobbers won 5-2 on Friday night lead by junior Jess Nelson’s first career hat trick, but gave up three unanswered goals after scoring first on Sunday afternoon to fall 3-1.

The 5-1 start on home ice does not mean that there is no room for improvement. The Cobbers have converted on only four of their 35 power plays (11.4 percent) and lead the MIAC in penalty minutes (95), averaging nearly 12 minutes in the penalty box a game.

“There are always areas for improvement,” Kongelf said.

The Cobbers will host Gustavus Jan. 29 and Jan 30 before traveling to St. Thomas Feb. 5 and Feb. 6. Their next home game is Jan. 8 against the University of Wisconsin-River Falls.