By: Kallie Eberling
In: Events, People, Variety
With: 0 Comments 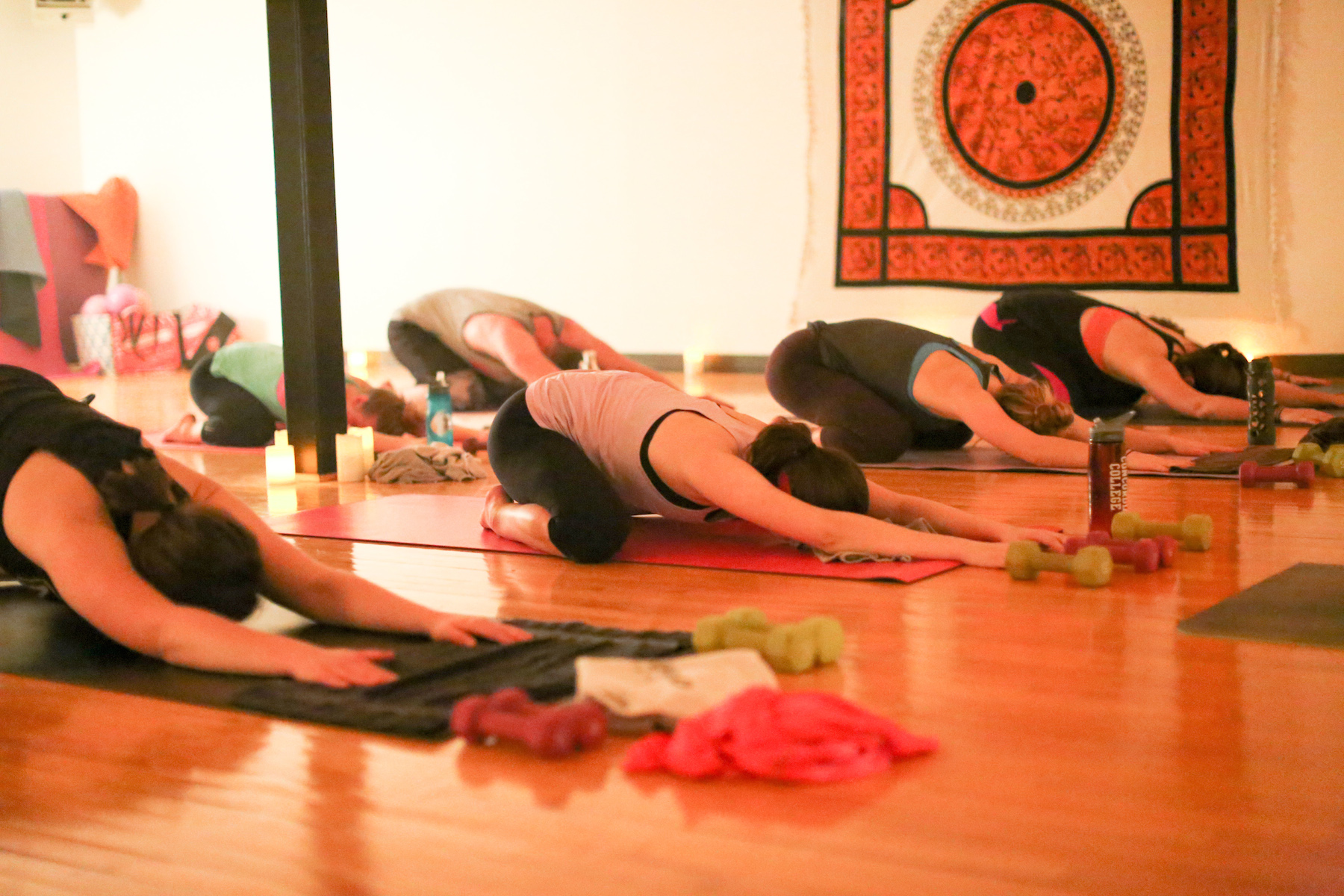 “Namaste,” Concordia student yogis said in a packed 105 degree yoga studio. Hannah Steffen, the class’s hot yoga instructor and a sophomore at Concordia ended her class with the simple word that is accepted as a respectful parting of ways in the yoga community.

Kvidt recently moved to Fargo-Moorhead and with her she brought a new form of yoga that the area had never seen. Sculpt and Shred is an active form of hot yoga that has been a hit at her studio. Kvidt trained Steffen as a Sculpt and Shred instructor last spring.

Sculpt and Shred, as well as all other yoga classes taught at Haute Yogis, are held in a very warm room to promote detoxification.

“Calling it yoga is a little deceiving,” Steffen said with a laugh. “We have weights. It’s really a total body workout, but incorporates some of the yoga poses with it.”

Steffan hosts Sculpt and Shred on Tuesday nights at the studio. She aims to relieve students’ stress and promote a healthy community through yoga, without breaking their bank accounts. With this idea in mind, Steffen hosts $2 Tuesdays.

“I didn’t want money to stand in the way,” Steffen said. “Having a $2 class once a week is something that, I think, is super affordable.”

Tori Benders is a Concordia senior and a regular at Haute Yogis. Along with Steffen and other regulars, she attends class nearly every day, sometimes more than once a day.

Benders said she saves her money for yoga because our bodies are always worth investing in. She makes time for yoga by using her time management skills, which she has improved on since starting yoga at the beginning of summer after learning about it through a friend.

“My classmate said she goes to Haute Yogis to stay healthy physically and mentally,” Benders said. “At this particular time in my life I knew this was something I needed and I couldn’t wait to try. I went to class the very next day.”

Since her first class, Benders has attended a variety of classes at Haute Yogis, besides just Sculpt and Shred. She said she chooses a class based upon her mood, and what type of relaxation and exercise she needs for that day.

Students can attend Vinyasa, Sculpt and Shred or any other yoga offerings at Haute Yogis for a $5 student price. Kvidt says that a variety of ages attend all classes, but oftentimes half of the class is Concordia men and women.

Kvidt said that many of the Concordia athletes use yoga to supplement their sports, while other yogis use hot yoga as their sole workout. She explained that her classes are more than workouts. They also help to create awareness and harmony by also forming a community among yogis.

Benders never imagined making friends with her yoga instructors like Kvidt and Steffen. She said that she loves the community aspect and the way that the classes make everyone feel included.

“The instructors have changed my life,” Benders said. “It’s hard for me to verbalize how important Haute Yogis is to me, but I just wish that everyone would try it because I think it has the power to change lives.”

Haute Yogis’ full schedule can be accessed through the MindBodyConnect app. The app allows users to book and pay for classes through it.

“The MindbodyConnect app is like my bible,” Benders said.

If the app is her bible then Haute Yogis studio is her place of worship.

“If I miss a day of yoga I can’t concentrate as well; I’m not as mentally stable,” Benders said. “It has offered me an opportunity to step away from school for just an hour to work on myself.”

Kallie Eberling is a sports editor with the Concordian. She edits weekly articles from various sports reporters. She also works as a contributing reporter.