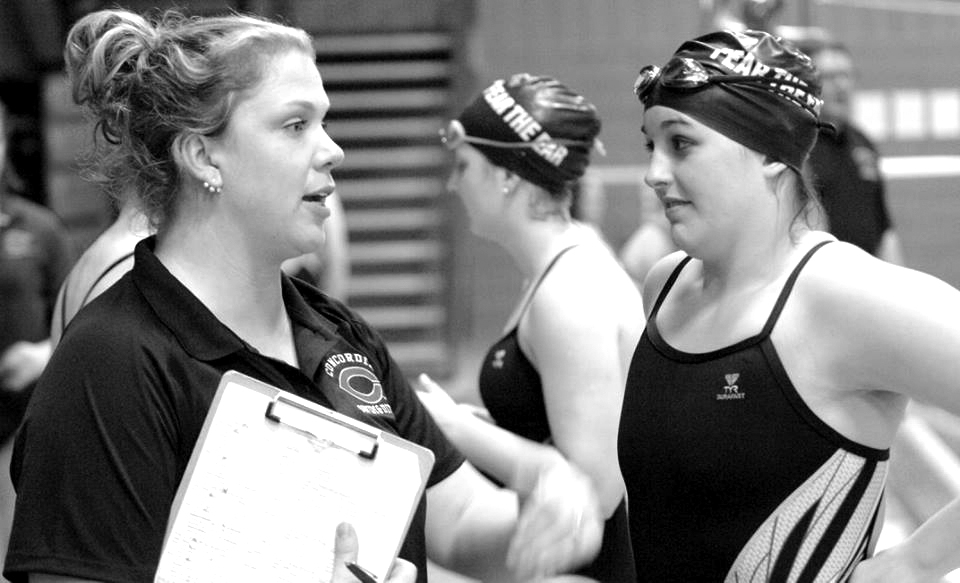 The waters of the pool are continuing to ripple as the Cobber women’s swimming and diving team pushes forward through their season. This year is head coach Talia Butery’s second season where she continues to make the program into a mighty force to be reckoned with.

“I expect our athletes to continue to grow as competitors,” Butery said. “Continue to build on the success we had in our previous season.”

While going into this season with last year’s success in mind the team has their standards high for both team and individual performance.

“We really want to get more people in top-16 at conference,” senior captain Jordyn Olson said. Maybe place a lot of relays higher up. Really just placing higher in MIAC, doing better in conference and becoming closer as a team.”

“It has been a couple years since I have been in the pool,’ Herkenhoff said. “So honestly, I just need to get back into the shape as I was when I was a freshman in college.”

This year is Herkenhoff’s first season swimming as a Cobber. She started her collegiate swimming career at Saint Cloud State. She transferred to Concordia her junior year where she left swimming behind and became a member of the Cobber women’s basketball team. Returning to Concordia for her senior year she wasn’t planning on going out for any sport, until she was convinced otherwise.

“I didn’t know that I was going to be on the swim team until late August,” Herkenhoff said. “I ended up talking to a family friend and he convinced me. He told me I have four years to be a college athlete and if I was good enough to make it, I should, because you know it’s four years. That’s all you got.”

While Herkenhoff works back into swimmer shape, Olson and junior captain Madeline Johnson do the same. Although Olson and Johnson did not take a few years off like Herkenhoff did, they both stepped away from swimming for a short time.

Olson was unable to train in the off-season as much as desired because of an internship. The job made it harder to get back into the swing of things.

“I knew it was going to be a challenge, so I just have to stay positive,” Olson said. “I just told myself that I wasn’t going to be at the same level as I was past years and that it was okay.”

For Johnson, training was interrupted because she spent last swim season in Italy studying abroad.

“I planned on trying to keep up with my swimming in Italy, but little did I know there was absolutely no pool access,” Johnson said. “I swam as much as I could when I came back, but four months is a long time to be out of the water.”

While Olson, Herkenhoff and Johnson work to get to their competition shape, the team continues to reach for their goals through their training.

With training being geared toward the team’s conference goal, the women can’t seem to get that “W” in any of their meets thus far despite their returning talent and fresh faces, but that hasn’t kept them from trying.

“Our upperclassmen are doing a fantastic job of leading the team,” Butery said. “The first year athletes are following up with great swims and a strong work ethic.”

While the leadership is at the top of their game, the new faces aren’t far behind.

“We have an awesome new group of freshman,” Johnson said. “They are definitely making an incredibly contribution to the team.”

The team’s work ethic is giving the swimmers a little extra boost as they continuously see improvements from their hard work.

“I think we have seen a lot of improvements, but we don’t have a win yet.” Herkenhoff said. “We don’t have divers. We are a very small team and don’t fill our events. You need to fill the events and you need enough swimmers and divers. That is where we fall short.”

Small but mighty, a phrase that can be used to describe this year’s batch of Cobber women swimmers, but they do not let that hold them back. Despite their size they just keep swimming.

2015-12-10
Previous Post: Want to take a course on Fantasy Football analytics?
Next Post: We need to care about all tragedies