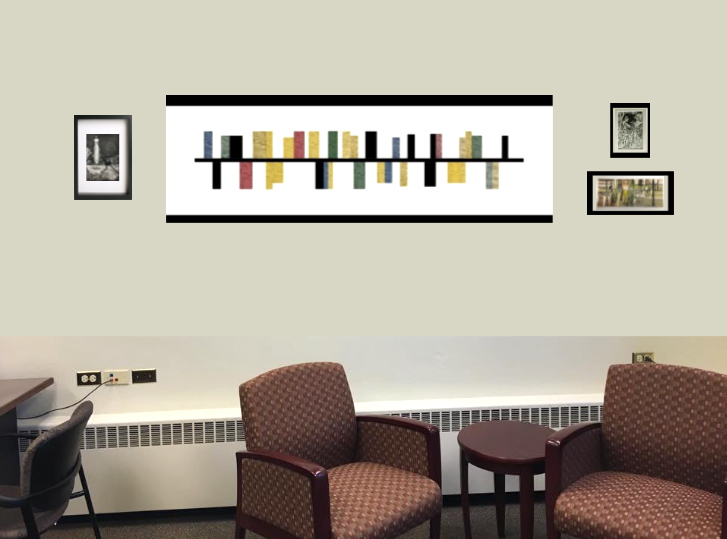 A student walks into the office and sits down. They look around the room and see a vibrant print of a bookshelf hanging on one wall, and various other frames of old pictures and paintings depicting aspects of Concordia. There is another wall with three, tall windows. Framing the windows there is a photo of a Concordia building from its founding days, a clock with the mission statement, and a photograph of the traditional beanie toss. This is a model of what Dean Eric Eliason’s office will look like once museum studies students have curated the space.

According to Corinne Burrell, sophomore and heritage museum and communication studies double major, the clock symbolizes more than just the time of day.

“The clock symbolizes the passing of time and how the mission statement has been a steadfast thing to be guided by,” Burrell said. “The beany toss [represents] the future for Concordia and how new Cobbers are the new generation that are going to lead us into the future. [The whole thing] shows the span of Concordia, sort of the past present and future.”

Curating the Dean’s office may not seem like something a museum studies student would be doing as a class project, but decorating a space like an office can be similar to what this major entails.

“Museum studies is basically studying what it takes to be a part of museums,” said Collins, heritage museum studies and history double major. “So that includes archives, collection management and curating. We study museumology, the theories in how museums are set up and how they involve themselves with the community.”

Once this project was introduced, groups of students within the class went and talked to Eliason in order to gather his interests and the vision he had for his office. One of his interests, according to Collins, was to represent Concordia in some way.

“He said he needs us to honor the past and build upon the past, but look into the future,” Collins said. “We called our project ‘On Firm Foundation Grounded’ after his statement.”

After the class met with Eliason, he needed to choose only one group to curate his office. According to Burrell and Collins, they along with classmate Marissa Johnson and graduated Serena Bouta, were the winning group.

“All of the groups had awesome plans and all of them were different,” Collins said. “I think he mentioned in his decision that ours included both honoring Concordia, but included some of his personal interests in the plan as well. I think he liked that attention to detail.”

Collins was excited to be chosen to work on Eliason’s office and thinks Eliason deserves an office that is more like his space.

“It’s an important office that people, students, prospective faculty go to,” Collins said. “[Eliason] said, ‘I give good and bad news in that room’”.

The whole group worked collaboratively to create a presentation of how Eliason’s office would look after curating, and they are working together now as they order in pieces to decorate his space. According to Burrell, however, some of the individual walls in his room were designated for specific members of the group for the purpose of presentation.

“My role was specifically the time wall,” Burrell said. “We divided the space and collaboratively we worked on what would aesthetically look good together.”

According to Burrell, choosing a student art piece to feature in the new office was one of the most challenging group decisions.

“Five or six students were commissioned to design and propose a piece,” Collins said. “There were so many great pieces of art that it took a while for us to decide.”

Eventually, Collin’s and her group chose Elliot Gielen’s piece to feature in the office. His piece is a print of a bookshelf.

“He had this fantastic piece. We thought it was interesting; it had clean lines and various colors and so we could build off of that great piece to give an idea of what else we should put in the office,” Collins said.

According to Collins, her group is also including a variety of other pieces of artwork and photographs, including pieces from professor Heidi Goldberg’s print collection from past students. One of the prints features the bell tower. Collins and her group also plan to order a piece of art called a lithograph. It features the words from Maya Angelou’s “I know Why the Caged Bird Sings” and the words create a picture of a bird flying out of a cage.

Collins and Burrell’s group has a finished plan for Eliason’s space, but they have not been able to start decorating. At the beginning of the semester, both the students and Eliason have busy schedules. The group still has to accrue the rest of the supplies, including frames and more artwork to curate Eliason’s office.

Despite what she has learned, Burrell underestimated the amount of effort it would take to develop a space like an office, let alone a museum.

“I don’t think I realized how much effort and work and theory knowledge goes behind working and developing a museum,” Burrell said. “It can be walking on eggshells for certain things. We learned how accountable we have to be because people’s pasts can be affected by this and people from the past who have living relatives and how that can be sticky sometimes.”

Through the challenges and hard work of the project so far, Collins saw how this project reflected what she would be doing in a career for museum studies.

“You are working with a client and you get what they want and what will work in the space and then you work from their interests and what you can do with the space,” Collins said. “Which is a big part of curating.”

So far, according to Burrell, this project has been a memorable and worthwhile experience.

“It was a very practical experience just to know how to communicate with an artist and how to search the web for reliable resources, how to get things here on time and communicate with someone as busy and as important as the Dean,” Burrell said. “It is all very transferrable.”