Men’s hockey athletes play across the country before Concordia

By: Aubrie Odegaard
In: College, Sports
With: 0 Comments 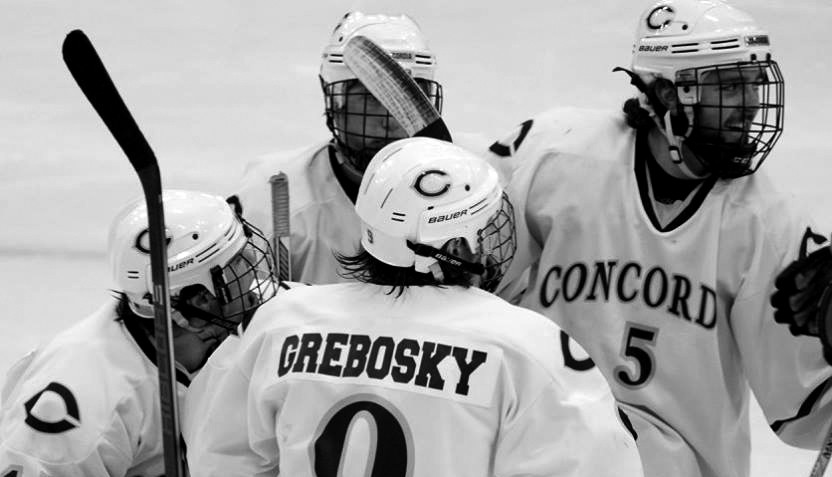 The Zamboni makes its rounds, making the ice errorless. Tiny hands and foreheads are pressed up against the wall to watch. As the final strip of the ice is slicked smooth, the rink wall opens and the Zamboni disappears into the oversized garage. On the far end of the rink a smaller portion of the wall is cracked open, letting out a mass of ice skates, jerseys and pads — hockey players.

As their heroes skate by, the children let go of the wall and begin to chase after them, running as close to the barrier as possible, as the players skate around the ice, giving the once smooth surface its rough edges once more.

Children on the East Coast, children overseas, children across the U.S. borders have looked to this game, hockey, and come to love it. They have developed a desire to play and it is that desire that brought a number of men’s hockey players to Concordia, to play a sport they fell in love with.

Junior Ben McWilliams and sophomore Jon Grebosky have come to Concordia from places other than the Minnesota-North Dakota area. Grebosky comes from Pittsburgh and McWilliams comes from North Vancouver, British Columbia.

Their desire for the game has them digging up their roots and traveling to the constantly below freezing temperatures of Moorhead, Minn. This pursuit of hockey comes from a long history of being around the game.

“When I was two years old my mom took me to the rink because she was bored,” Grebosky said. “I have been on the ice ever since.”
McWilliams had a similar story.

“As long as I can remember I’ve been playing hockey,” McWilliams said. “My parents got me into it. I started skating when I was three or four. Never stopped.”

From their early ages, the game kept going. Even after high school, before their time at Concordia they continued playing in the juniors for a few years.

During the two years that McWilliams competed in the juniors, he stayed close to home, playing for the North Van Wolf Pack and the Langely Rivermen — both teams out of British Columbia.
Grebosky had a different story. Before pursuing a collegiate career in hockey, Grebosky spent three years across the United States playing for junior league teams. According to Grebosky he played with the Lincoln Stars out of Nebraska, the Corpus Christi Ice Rays out of Texas and Aberdeen Wings out of South Dakota.

According to McWilliams it’s rare to see players on teams who did not play juniors in between high school and college.

“In the college game, coaches are looking for players that have played juniors,” McWilliams said. “It’s sort of how you get to college.”

Members can participate in the juniors up until the age of 21. As McWilliams and Grebosky’s times in juniors were coming to a close, head men’s hockey coach Christopher Howe reached out to them.

While Howe never made the trip across the border to North Vancouver, it did not mean McWilliams was off his radar.

“He saw some video of me,” McWilliams said. “One of my coaches in juniors actually knows Coach Howe, so that is how I first got in touch with Concordia.”

The connection between coach, player, and game was strong. The passion for the sport not only brought McWillams and Grebosky to Concordia, but also brought together a number of other players from different areas to play as one team.

Together, players from near and far making up the #4 MIAC-ranked Cobbers will take on current #3 MIAC-ranked St. Thomas Friday at the Moorhead arena, a single lifelong passion for the game on Concordia’s side.