Men’s throwers are back and ready for a strong season 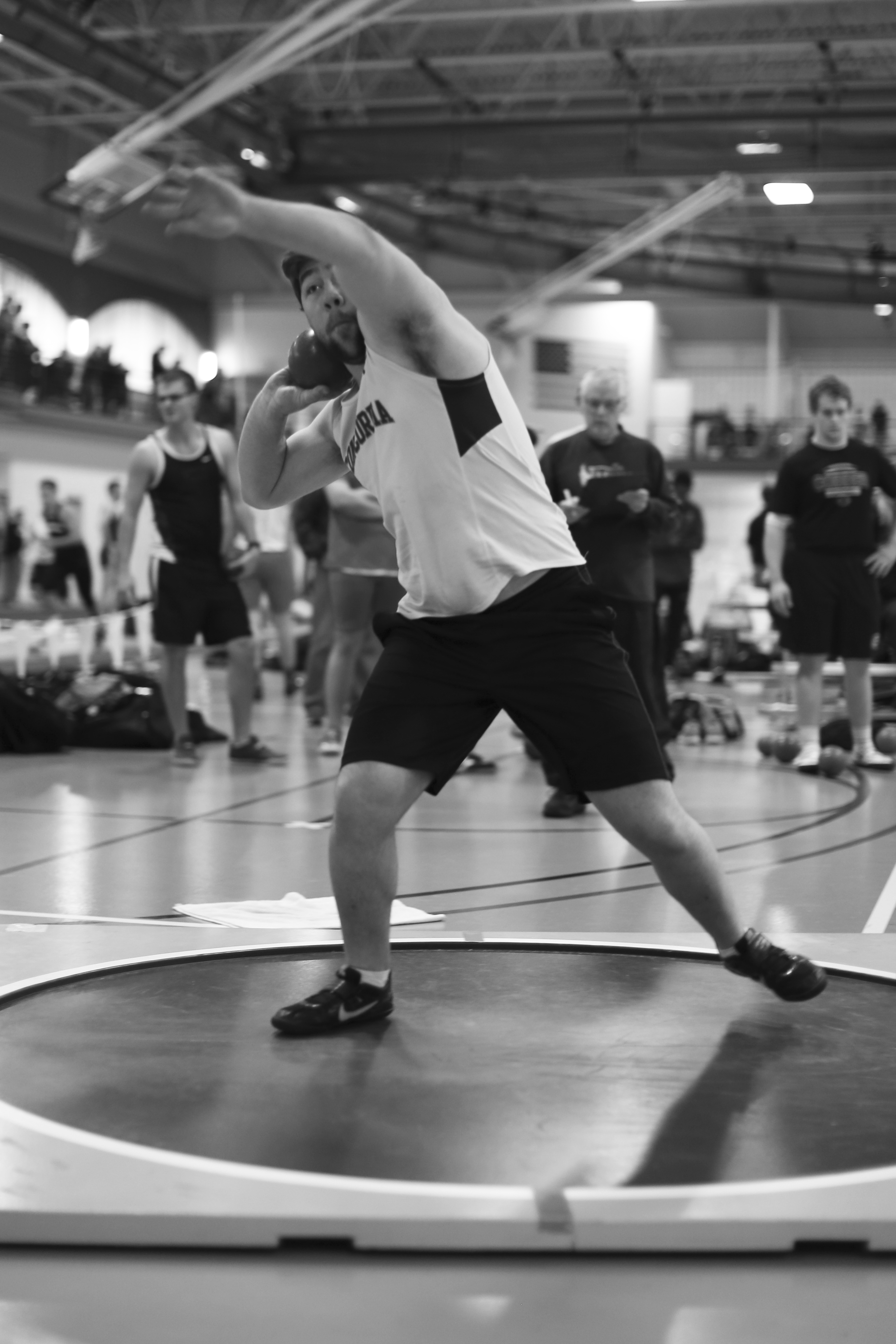 “I was the only [consistent] men’s throw- er,” Aldous said.

Early into the 2016 season, the team has seen almost completely opposite results. Led by Bye’s weight throw of 46-11 3/4 — a throw that is currently top 10 in the conference and top 10 in the school’s all-time history — cur- rent Cobber throwers now hold three spots in the school’s top-25 list of all-time throws.

Part of the early success comes from having more members. This year the team has three seniors, two juniors and according to Bye, “a pretty good class of freshman.”

Part of the success comes from incorporat- ing film study.

“We like to videotape each other,” Hulden said. “You can tell someone to fix something and it won’t change anything in their mind, but if they see what they’re doing wrong [then they know] how they need to fix it.”

“If people can see what they’re doing [wrong] they can compare it to what they know is right,” Bye said.

Aldous said that video is beneficial in teaching the weight throw, an event that throwers do not compete in until they reach the collegiate level.

“Weight throw in particular is really hard to explain to someone when they’re new,” he said. “So the video helps a lot.”

Part of the early success comes from a new weightlifting program.

Bye, who also plays football, said that weightlifting for throwing is different than football because of the different dynamics of the two sports.

“Lifting for track is different because you’re trying to get all of your body strength into one moment, whereas football is repetitive,” Bye said. “[Throwing] is like peaking your strength.”

Most of the track and field athletes started the new weightlifting program in the fall and have been following it for six to eight weeks.

“Coach Yao has been great,” Hulden said. “I’ve had a lot of fun lifting with him.”

Yet according to Aldous, the biggest reason for the success is the team atmosphere.

“Everyone throwing at the same time and critiquing each other has been huge,” Aldous said. “We haven’t had that as much in the past couple of years because our numbers have been so low.”

In the sport of throwing, which can be

more of a mental sport than a physical sport, experienced leadership can be advantageous.

Both Bye and Hulden agree that relaxation and feel are big aspects of being successful in throwing.

For Hulden, feel is how he connects with someone struggling.

“Being a thrower yourself you feel the same things they feel and can say, ‘I fixed it this way so try this,’” Hulden said. “It’s just the tiny, little things that can make the biggest differ- ence.”

Hulden also said that throwing is more complex than what it might seem because of how short of a time-window there is that goes into a throw.

“[In running], a mile is four minutes,” Hul- den said. “So if you mess up for 20 seconds in a mile you can still get a good time. A throw is under a second.”

It is this short amount of time that makes fixing a poor throw so hard.

“If you want someone to change something in a throw, it’s really difficult because you’re

fitting so much form into just a second,” Hul- den said.

Bye said that this is where muscle memory helps.

“People aren’t natural-born throwers,” he said. “It’s a lot of repetition and muscle mem- ory to teach your body what positions to be in.”

All three senior throwers agree that good throwing form is what makes for better dis- tances and can lead to exponential growth while in the ring.

“There are some huge guys I’ve seen come into throwing and they come in and they don’t know how to throw but they’re so big that they think they can just beat everyone,” Aldous said. “They go and do their first [throw] and they grunt as loud as they can. It never goes above their head. It goes like eight feet. And then they fall out of the ring.”

If a thrower leaves the ring without control of their body, or if a thrower’s foot touches the line of the ring, the throw is automatically scratched and the throw does not count.

Bye believes that the season outlook for the throwers looks strong as the men try to qualify for the MIAC conference championship meet.

“I think right now we will probably qualify three in the shot put and three in the weight [throw],” Bye said.

The throwers will compete in the NDSU Thundering Herd Classic Feb. 13 before head- ing to the St. John’s Quadrangular Feb. 20 and the Ole Open Qualifier Feb 26.