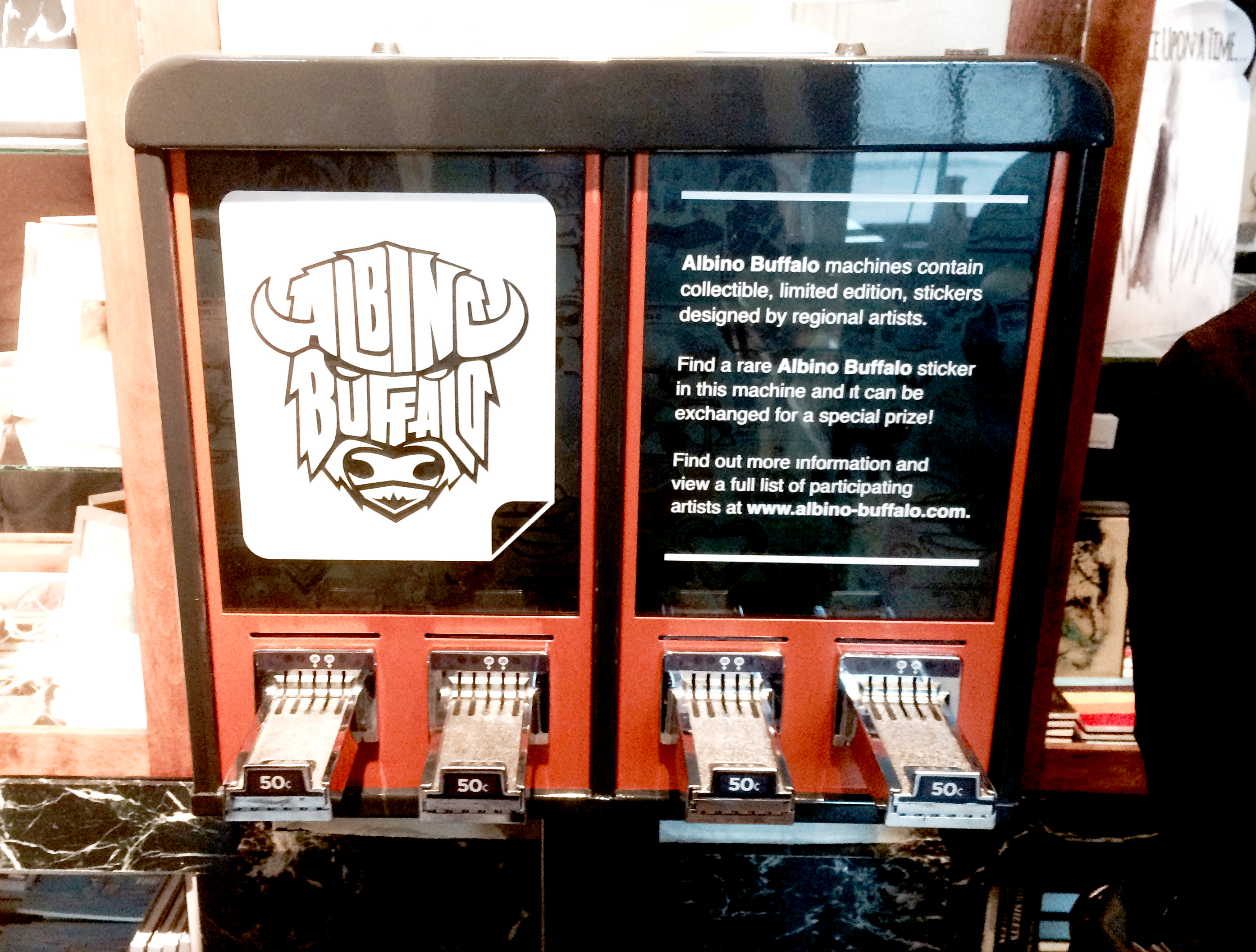 Fifty cents doesn’t buy much anymore — maybe a handful of Skittles or a Tootsie Pop from a vending machine. And if anything comes out of a vending machine, it can’t possibly be very original or artistic — or can it?

Graphic designer and Concordia art instructor Jeff Knight makes old vending machines into art dispens- ers, allowing local artists to spread their work. According to him, 50 cents can buy a lot more than a snack. These machines dispense individual stickers of local artists’ work for just a couple quarters.

The sticker dispensers are developed by Albino Buffalo, a company founded by Knight. He started the Fargo based company using a grant from the Arts Partnership,an art collective that seeks to cultivate the arts in Cass and Clay counties. Hopefully, the machines will do just that.

With every sticker comes a note about the artist who made the graphic design. Each sticker is also categorized in rarity, which means some are little rarer than others. The artists themselves determine which ones are rarer, and which ones are not.

Knight’s inspiration for starting Albino Buffalo was his combined interest for stickers and graphic design.

“I wanted to try to figure out a way to merge graphic design with the art world,” Knight said.

So far Albino Buffalo has produced several machines: one is located in Fargo — usually at Unglued — one is in Bemidji, three are in storage and one is ready to be put out. Knight wishes to pro-

vide more accessibility to art throughout the upper Midwest.

“We are hoping to expand into Bismarck, Duluth and Sioux Falls,” Knight said. “A lot of people don’t come to a gallery to view art, and this is kind of way to take art back into the public space.”

According to Knight, the name Albino Buffalo is in- spired by the beautiful albino buffalo, which are very rarely witnessed. In each machine, there is one rare sticker that can be exchanged for a prize, for instance a notebook from Albino Buffalo.

Albino Buffalo has had three series of different art- work from local artists in the machines. On Jan. 7, the launch of the fourth series was celebrated at the Rourke Art Gallery Museum in Moorhead. A machine filled with 1,000 stickers was located at the first floor of the gallery, allowing guests to buy stick- ers and see the different art in the series.

“Since day one we have wanted to have a show celebrating the artists behind this,” Knight said.

Artists from all series have been encouraged to display their art in the Rourke Gal- lery. The exhibit will be avail- able to the public from Feb. 7 to Feb. 22. Many media are represented: typography, painting, illustration and even poetry.

“A little random show, and that is kind of intentional,” Knight said. “The machine itself is random, so you don’t know what you’re getting.”

One of the artists that has worked with Albino Buffalo is McCal Joy Johnson, an artist and teacher living in Fargo.

“I remember, before I was asked to have my work as a sticker, pulling some stick- ers out of a sticker machine and thinking ‘man, this is so cool.’” Johnson said. “This sticker didn’t come from

Walmart, it didn’t come from Target — it came from a local artist.”

Johnson said she was ex- cited when Knight asked her if she wanted to have her work on a sticker.

Artist Jojo Seames also had positive things to say about the project.

“I’m a comic book artist mainly, so this kind of project — pop art, stickers — is completely my jam, and I was thrilled to participate,” Seames said. “I thought it was fantastic project, celebrating local artists coming together and working together in such a cool way.”

There is currently one Concordia alum in the fourth series of “vended” art.Chase Body graduated from Con- cordia last year and works at Super Studio in Fargo. Knight encourages Concordia art students to get involved in the project, but is mainly looking for more established artists that know their art style.