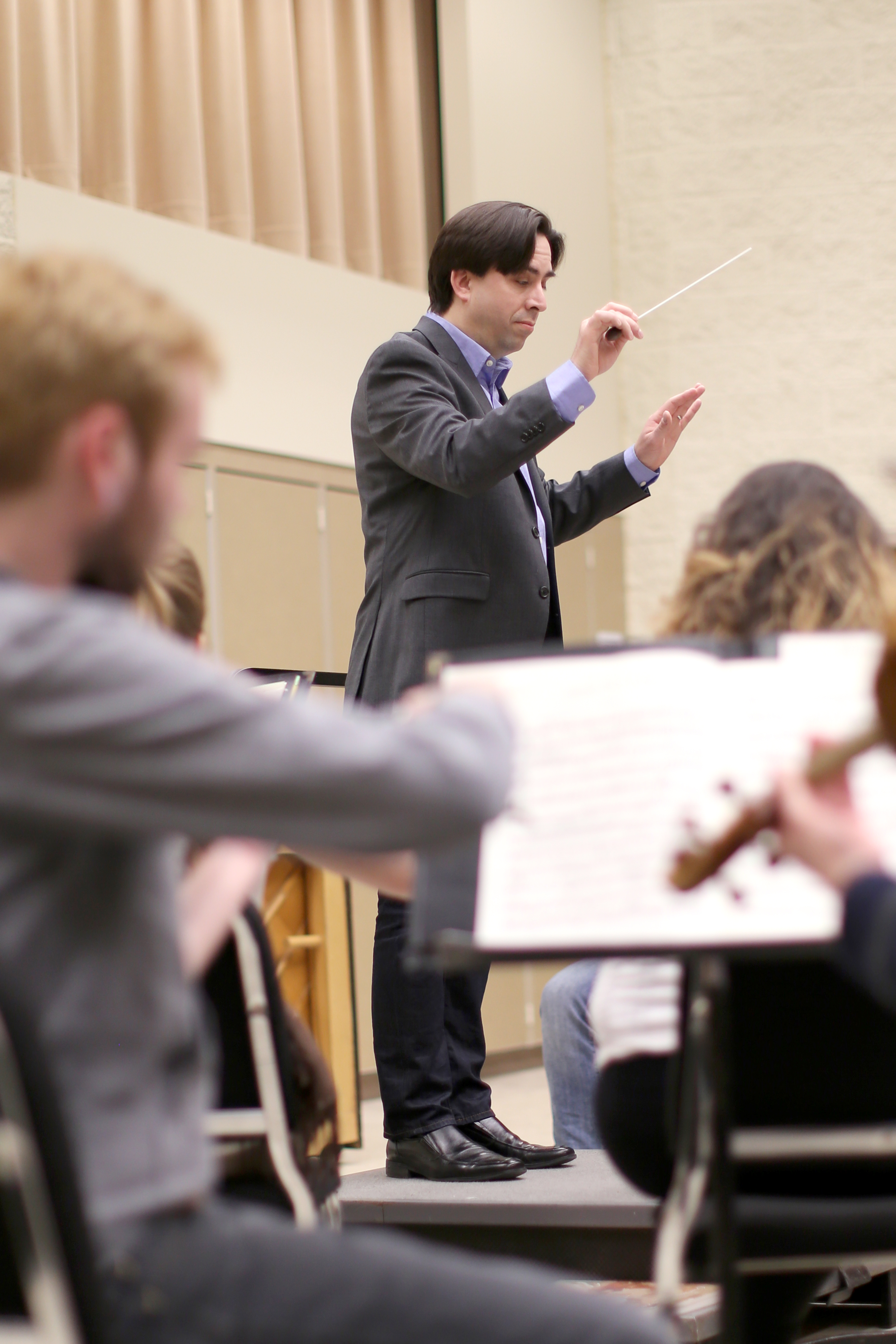 Corrections: Professor Capistran teaches string methods and is a violinist and conductor, but has also taught and played viola here. The viola students will have the opportunity to study with her and Professor Sonja Harasim next year.

In response to the quote from Jake Broten, the number of viola students in the orchestra has been as large in past years, according to Capistran.

1) The Department of Music employs several faculty members who teach more than one instrument.

2) It is not uncommon for an institution to hire an upper-strings applied studio professor.

Foster Beyers, conductor of the Concordia Orchestra, announced over spring break to his orchestra students that he will be resigning from his position at Concordia College after the school year commences.

Beyers has accepted a position as Director of Orchestras at James Madison University in Harrisonburg, Va.

“It’s a decision that’s good for my family and my wife in particular, who is also a conductor, so we’re hoping for more opportunities for her in an area that’s more populated,” Beyers said. “And it gives me a chance to do some things that aren’t possible here, like working with grad students and conducting opera.”

Sophomore Abi Mason is a percussionist in the Concordia Orchestra, which has roughly 70 members. She said that when she received the email from Beyers, which was “the most personal way he could reach [them] in the middle of break,” she had mixed emotions.

“[Losing] Beyers will be a great loss, but this will be a really good step for him in his career,” Mason said. “It’ll be sad to see him go but … it’ll be cool to see how a new instructor builds the orchestra.”

Beyers said there’s already a search committee in place for a new conductor.

“The faculty here — my colleagues — are very unified in trying to do what’s best for the students so I have no doubt that they’re going to choose someone who is going to take the orchestra program forward,” Beyers said.

According to Mason, members of the orchestra were told on Monday that when job applications are narrowed down to two or three applicants, those applicants will each conduct the orchestra at a practice and members will get to provide written feedback on the conducting.

“They assured us that they will find someone good and that they’re taking all of the students’ concerns into account,” Mason said. “Once we get over this stage of hurt and sadness, I think we’ll be excited for the future.”

The orchestra will also be losing Kate Hamilton, the associate professor of viola. She has been let go for the upcoming school year.

There are eight violists in the orchestra, according to Mason. Because Hamilton is the only viola instructor, conductor and violinist Jane Capistran will instruct the violists next year. Capistran teaches the methods class for all string instruments, but her primary instrument is the violin.

“All other instrument sections have specific instructors,” Mason said, mentioning that the viola section is the smallest in the orchestra. “I know I’d feel very lost if our percussion instructor was let go. I think this is just where they thought would be the easiest to make do.”

Sophomore Jake Broten is a violist affected by Hamilton being let go.

“I’m actually considering not being here anymore at Concordia because I just feel like … now that Kate — who was my favorite professor of all time — has been taken out … I feel like I don’t really have a reason to be here anymore.”

Broten said most violists are thinking about transferring or at least leaving the Concordia Orchestra.

“If I do end up staying here, I don’t think I can be a part of the Concordia Orchestra anymore because. … It doesn’t feel right.”

According to Broten, Hamilton means a lot to the viola section.

“A lot of us had such a really deep connection with her. Like more of a friend than like a professor,” Broten said.

Broten said he doesn’t know what the orchestra will do without Hamilton.

“Her expertise and her knowledge of the viola increased the section size by, like, triple. So then. … I don’t see why she was let go but then other people weren’t.”

Karis Baerenwald contributed to this story.