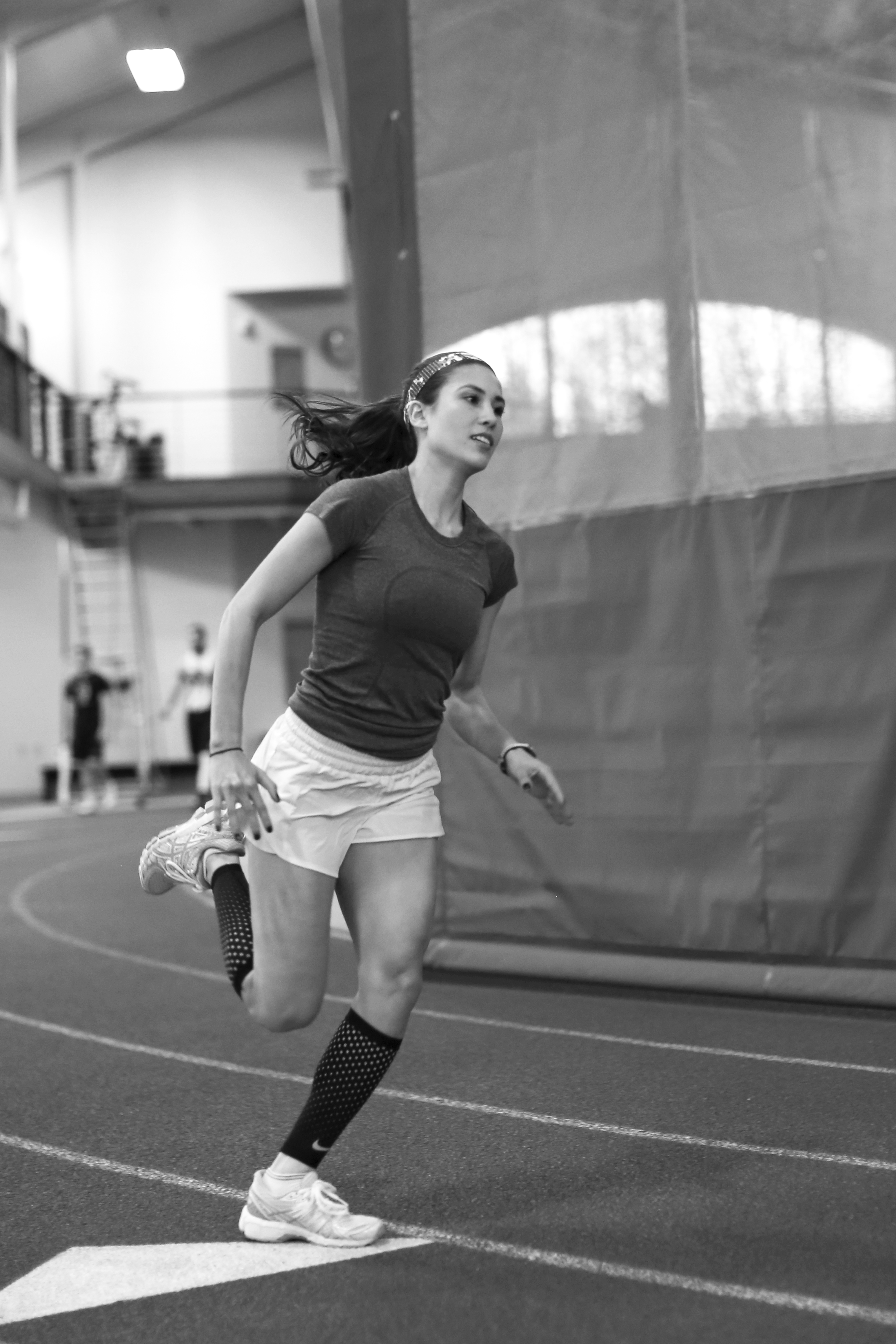 The six-time All-American claimed numerous school records with her speed and was a finalist for the NCAA Woman of the Year. A little background on what an honor it is to be up for this award: there are only 10 finalists a year from every division, I, II and III and the finalists come from every sport. Pfeiffer was one of them, and the only Cobber ever to be up for such an award.

She left a legacy all her own when she left Concordia. One that’s stood tall for 10 years. But the pillar of her success is receiving some cracks recently. A new name has come to the program, Hannah Lundstrom.

There are four years of high school that athletes get to compete. After those four years whether they continue is up to them. For Lundstrom, it was a different story.

Lundstrom competed in soccer and track during her time in high school, but unlike most she didn’t get the full four year experience. She didn’t quit, she was not cut from the team, she didn’t pursue extracurriculars, Lundstrom became sick. So sick to the point that she was forced to quit competing all together.

“I had stomach problems. So any exercise or eating I had excruciating pain,” Lundstrom said. “I lost a whole bunch of weight and I spent a lot of time in Mayo.”

According to Lundstrom, it took a year for the doctors to figure out what was causing her pain: it was a problem with her main digestive artery. The artery was being impinged, meaning she wasn’t able to get the proper amount of blood throughout her body. She needed surgery to rearrange her arteries, and then recovery time. There went her junior and senior years of high school athletics.

Because of her sickness and extensive time at Mayo, Lundstrom lost the last two years of high school athletics. Years she would never get back, but the circumstances didn’t discourage Lundstrom completely.

“I like sports and I couldn’t do them,” Lundstrom said. “But I think the main thing was I couldn’t just live my life normally. Like that was tough, but once I had the surgery I felt normal. But then I didn’t think I would be able to do track and everything again.”

Fast forward to her sophomore year of college, Lundstrom is no longer the sickly ex-athlete that she was in high school. In fact, Lundstrom is currently competing in her second season of collegiate track. For someone who wasn’t supposed to be able to compete in athletics again, she sure doesn’t sprint like a woman who was once overcome with excruciating pain.

“She has a natural running stride,” said John Marsh, head sprinting coach. “I watched her run for the first time going, ‘this kid’s got talent’ and she’s very unique in her talent.”

Her natural stride has worked well in her favor. Her freshman year of college, after not competing in track since her sophomore year, she came out with All-Conference honorable mentions during the Indoor MIAC Conference Meet and outdoor MIAC Championship in the 200-meter dash. Looking at Lundstrom now, putting up these marks her first year back, if she would have been healthy her final two years of high school, who knows if she’d be a Cobber.

“She has a ton of talent,” Marsh said. “I mean she’s one of these kids that if she would have been healthy her junior and senior year I don’t wanna say she wouldn’t be at Concordia, but there would be a lot of other people knocking on her door trying to get her in. I mean she would have the, University of Minnesota recruiting her for her talent.”

While Lundstrom has put up these big marks in just a year-and-a-half competing, there is still a lot that needs to be done to get her to her best running potential.

“We were kind of moving from ground zero,” Lundstrom said. “Since I couldn’t compete in track junior and senior year there really weren’t any expectations.”

For Marsh, he has to train her a little differently.

“I have to handle her like she is an 85-pound weakling,” Marsh said. “You really have to back off her. Before she can really get good she has to get stronger physically. So the bar is pretty low right now for her. When she came in she couldn’t pick up the bar.”

While her strength is a big part of getting her back to the top, her running form also needed a little work.

“I’m supposed to become pigeon-toed now,” Lundstrom said with a laugh. “If you point your toes in you run faster. Because I’m duck-footed you don’t get as much traction.”

The change in footing seems to be working in favor of Lundstrom. In the recent NDSU Thundering Heard Classic, Lundstrom put the crack in Pfeiffer legacy when she broke the decade-long 200-meter sprint time, 25.91 seconds. Lundstrom crossed the finish line breaking the record by two hundredths of a second, 25.89. For Lundstrom, it was just another perk to the race.

Now that Lundstrom knows that reaching the 25s is possible for her, she knows that she is proving all those people that told her she couldn’t compete again that she can, and she can break records while doing it.

“I kind of more so think about it because doctors told me like ‘oh you might not be able to do this again,’” Lundstrom said. “I kind of feel like I’m proving them wrong.”

Lundstrom has a lot of races left in her collegiate career, meaning the pillar of Pfeiffer’s success still has time to crumble. And for Marsh, he expects nothing less.

“Was I surprised? No, not at all,” Marsh said. “She’s not done breaking records. I’ll see her break a lot of records.”

Lundstrom along with about 25 other Cobber tracksters will take the track for the MIAC Indoor Championship Meet at Carleton Friday and Saturday. Who knows, maybe Lundstrom is feeling another MIAC championship. For Marsh, he sees Lundstrom only going up from here.

“She’s gifted,” Marsh said. “It’s going to be fun to watch her future unfold. I don’t want to project, but she’s really good and she is going to get a lot better.”