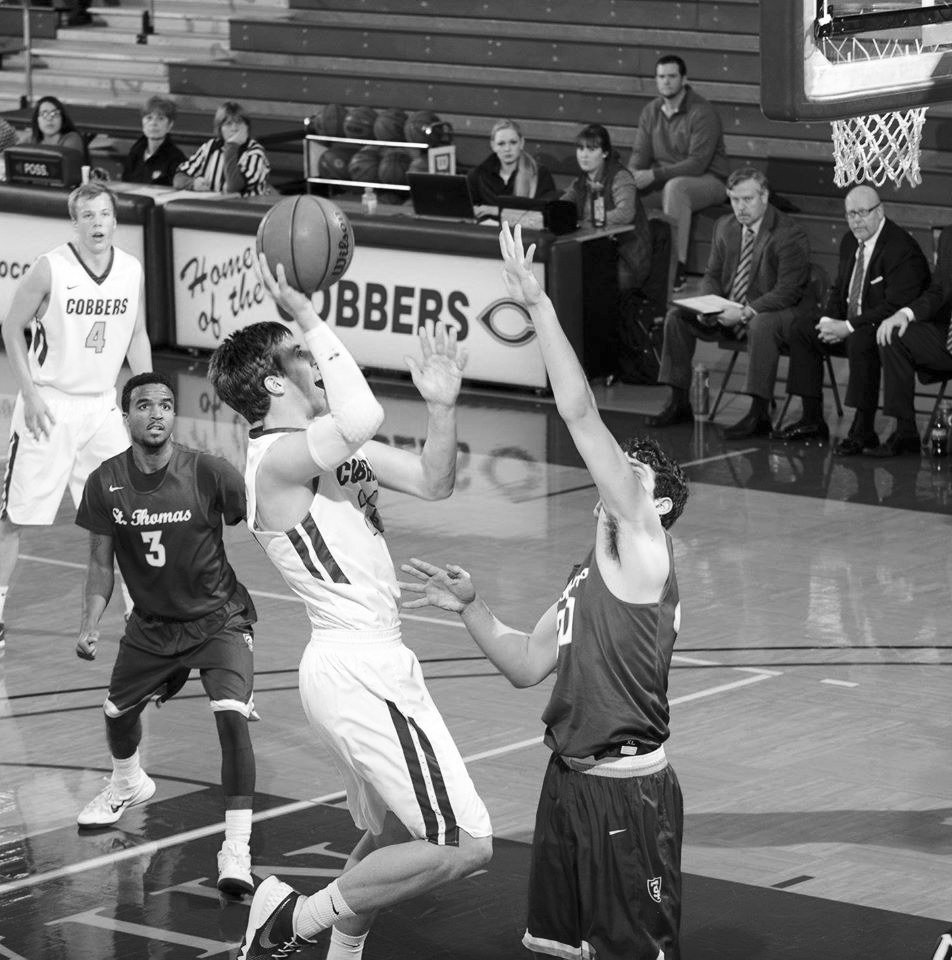 The snow has begun to melt away and the temperature is slowly inching up the thermometer. People are beginning the shift from heavy winter jackets, mittens and hats to light sweatshirts and ball caps. Not only are we starting to say goodbye to yet another brutal Minnesota winter, but we are forced to say goodbye to our winter sports as well.

Over spring break both Cobber men’s and women’s basketball teams spent their off days from school preparing for the MIAC playoffs. Both teams secured a chance to play at home against Bethel for the first round. On Feb. 23, the women overcame the Royals 85-74, but the same couldn’t be said for the men. On Feb. 24, the men fell short a couple baskets, 67-62, forcing the team to say an all too early goodbye to the season.

“Just didn’t turn out the way we wanted to obviously,” said Jordan Bolger, a senior. “We had decent shots, but they just weren’t falling … they were just a better team that night unfortunately.”

While the loss is tough to swallow, it doesn’t affect the season overall.

“Bethel is a talented team and it’s unfortunate that we weren’t able to beat them in the playoffs,” said Thomas Fraase, a senior. “However, that doesn’t take away anything from our season. I’m really proud of all my teammates on a successful year.”

As the men’s team went their separate ways to finish off spring break, the women made a trip the cities to face up against #1 MIAC ranked team, St. Thomas in the semifinals.

The Cobbers were coming for revenge from their first loss in regular season to St. Thomas, but as the game took off, so did the Tommies.

“They had little spurts of runs that we just couldn’t seem to come back from,” said Olivia Johnson, a senior. “We started to slowly get back into it. At halftime we were close, but they came out right away on fire and we just weren’t quite prepared for that.”

It’s not to say the Cobbers weren’t ready though.

“I think going into it we were all having positive mindsets,” said Katie Rosenfeldt, a senior. “We weren’t afraid. We were confident. They executed well, we didn’t.”

Although neither team made it as far as they would have liked and the seniors have closed another chapter in their lives, there is a lot of good to look back on this season.

“I have so many positives to take away from my four years as a Concordia basketball player,” Fraase said. “I was able to grow into a better player, but more importantly a better person … I can’t say enough good things about the basketball program.”

For most members, it’s the friendships over the years.

“Just the relationships with all the guys is obviously something you could take away,” Bolger said. “It will always be fun to win more games and win that one more game, but I guess it doesn’t matter a whole lot. What matters is the relationships.”

On the women’s side the relationships were what made it fun.

“Every day was fun to go to practice,” Rosenfeldt said. “There was never a day that you dreaded coming to practice.”

Throughout the seasons, the team members not only built lifelong friendships, but they also built names for themselves. The hard work before and during the season has paid off for a number of members on both teams. Specifically, Johnson, Fraase and Bolger were named to the MIAC All-Conference Team. For Fraase, he remains humble about his recent honor.

“I’m not big into individual awards. The award isn’t what will matter down the road, it will be the relationships that have been developed with my coaches, teammates and fans,” Fraase said. “It is a nice honor, but there’s absolutely no way that I could have earned it if it weren’t for the hard work and selflessness of my teammates and coaches.”

“It’s a huge honor and I’m really blessed,” Johnson said. “I’ve had great teammates these past four years and I’ve been able to take some of their skills and add it to my game. The award is really a testament to the great teammates I have and the confidence they put in me.”

For Bolger, MIAC All-Conference Team isn’t the only award that he is walking away with after his senior season. He was named with the league’s top honor, MIAC Most Valuable Player, and is one of ten finalists for the Jostens NCAA Division III Player of the Year award. In school history, there has only been three players before Bolger that have earned MIAC MVP and he is the first player in the history of the program to be a finalist.

“I honestly can’t even believe it,” Bolger said. “Coming out of high school my coaches always said that I had so much more potential. I didn’t even start on my high school team so I guess I thought they were just saying that to me.”

As great as the MIAC MVP award is, being a finalist for player of the year is a little bit better. The award has three parts it takes into account: basketball ability, academic success and community service.

“I am much more proud of that award just because it shows that I’ve done so much more than being an athlete here at Concordia,” Bolger said. “I’ve studied hard and have partook in the community and stuff like that so yeah that one I am actually a lot more proud of.”

For a number of men’s and women’s basketball players, the post-season honor helps push aside the sting of losing a bit and helps the seniors to look back and appreciate what the last four years has brought them.

“It was a really fun season,” Rosenfeldt said. “We couldn’t have asked for a better group of teammates.”

And the same can be said for Fraase.

“I wouldn’t change a thing,” Fraase said. “I wouldn’t trade the memories or the friends that I have met along the way for anything.”