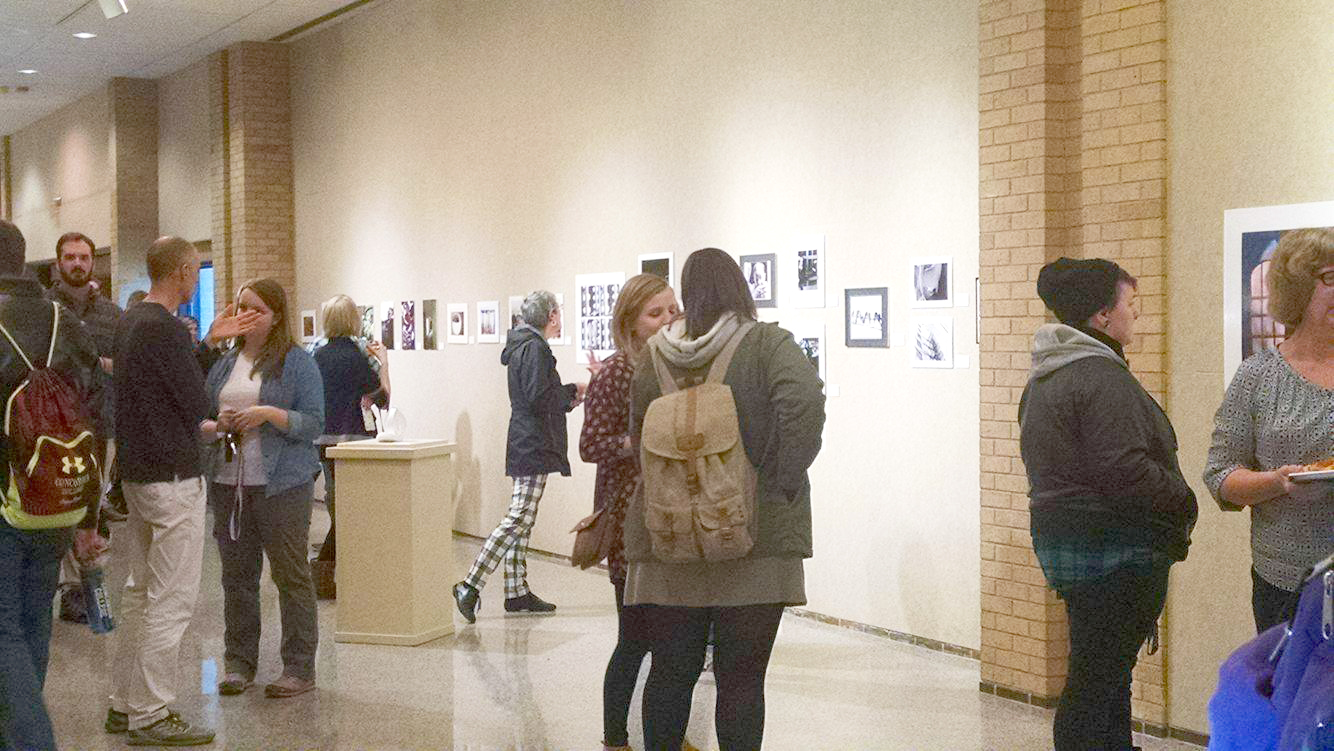 The gallery buzzes with warm conversations as students, faculty and families meander through the room. The walls pop with color from watercolor, acrylic and digital paintings. Framed art takes its audience to another dimension through charcoal, pencil and ink drawings while photographs feature captured bits of memories and places. A few sculptures are displayed on white pillars: metal, clay and ceramic in their own spotlights.

On March 10, the Student Juried Art Exhibit opened to the public. Five awards were given out, a first prize, three merit awards and one purchase award. Every award comes with a cash prize, but the purchase award is different. The cash award for the purchase award comes from Doctor Charles and Vicky Hartz. They have been faithful supporters of the art department and of the student art exhibit for years and always purchase the top award-winning piece.

When preparing the art exhibit every year, Professor Susan Lee said that a different juror is selected each time. The juror is in charge of selecting the submitted art for the show and picking the award-winning pieces. The juror must be a prominent art authority figure in the area. This year, Dayna Del Val, executive director of Arts Partnership Organi- zation in Fargo-Moorhead. She is also a freelance writer and actress.

The Juror was not the only aspect that was new about the exhibit this year. The art selection had some unconventional submissions including a knitted piece, a film of the theatre department and digital paintings.

“We are trying really hard; that push to encourage students to take part. An effort to make art approachable and a part of all Cobbers’ lives even if it’s an unconventional medium — that it’s all valid art,” Lee said.

In an effort to bring art into every Concordia student’s life, Lee and others involved in the art exhibit wanted to open submissions to all students, not just art majors.

“We used to have a limit on the submissions that they

had to be produced in class, but we wanted to open up to non-artist students,” Lee said.

Before awards were announced that evening, juror, Del Val spoke to all artists in the room, expressing gratitude in being surrounded by art that really spoke to its audience.

“Your art does a lot more than just be beautiful. Your work is fabulous,” Del Val said.

Merit award winner Jack Hinz won for his photography piece, “LGBTA Discrimination.” The piece was a photography assignment that needed five pho- tos and Hinz took a pho- tograph of a person that stood for each letter of LGBTA, (lesbian, gay, bisexual, transgender and asexual). Across the faces and bodies of the subjects were words of hate or discrimination commonly associated by that identity. Then overlaying the whole photograph was the word freak in red letters.

“I’m trans myself so I understand discrimination,” Hinz said. “It hits close to home and it was a good series.”

Kassondra Ptak was also a merit award winner for her piece, “Needle on Medal.” Her piece was also a class as- signment where the students had to create a drawing monotype, a type of print, on a still life displayed in the classroom. Ptak chose an old sewing machine because she thought it was interesting. Ptak was not expecting to win, especially not with this piece. She had submitted a couple of watercolors and thought those had a better chance than her print.

“I like my pieces, but I didn’t think they were the best in the show,” Ptak said. “Then I wasn’t surprised by the other winners. I just put [my print] in on a whim so I was pleasantly surprised.”

The other merit award winner was Maddie Malat for her piece, “Lemons,” a watercolor on paper of three lemons that look real enough to grab off the blue back- ground. First place merit award went to Siri Berry for her piece, “Mandala V,” an intricately drawn mandala in pen ink on Bristol paper.

For the purchase award, a pistachio took the prize. “Pistachio” by Layne Cole is a plaster sculpture of a pistachio with an abstract twist. The plaster sculpture was done as a requirement for her 3-D foundations class. Ironically enough, Cole had initially forgotten about the assignment, which was to pick an organic object as the subject for the plaster. She made it last-minute when she found a pistachio in her jacket pocket, her favorite snack.

Surveying the art like everyone else in the exhibit, Lee appreciated the variety of selections hanging on the walls and displayed throughout the space.