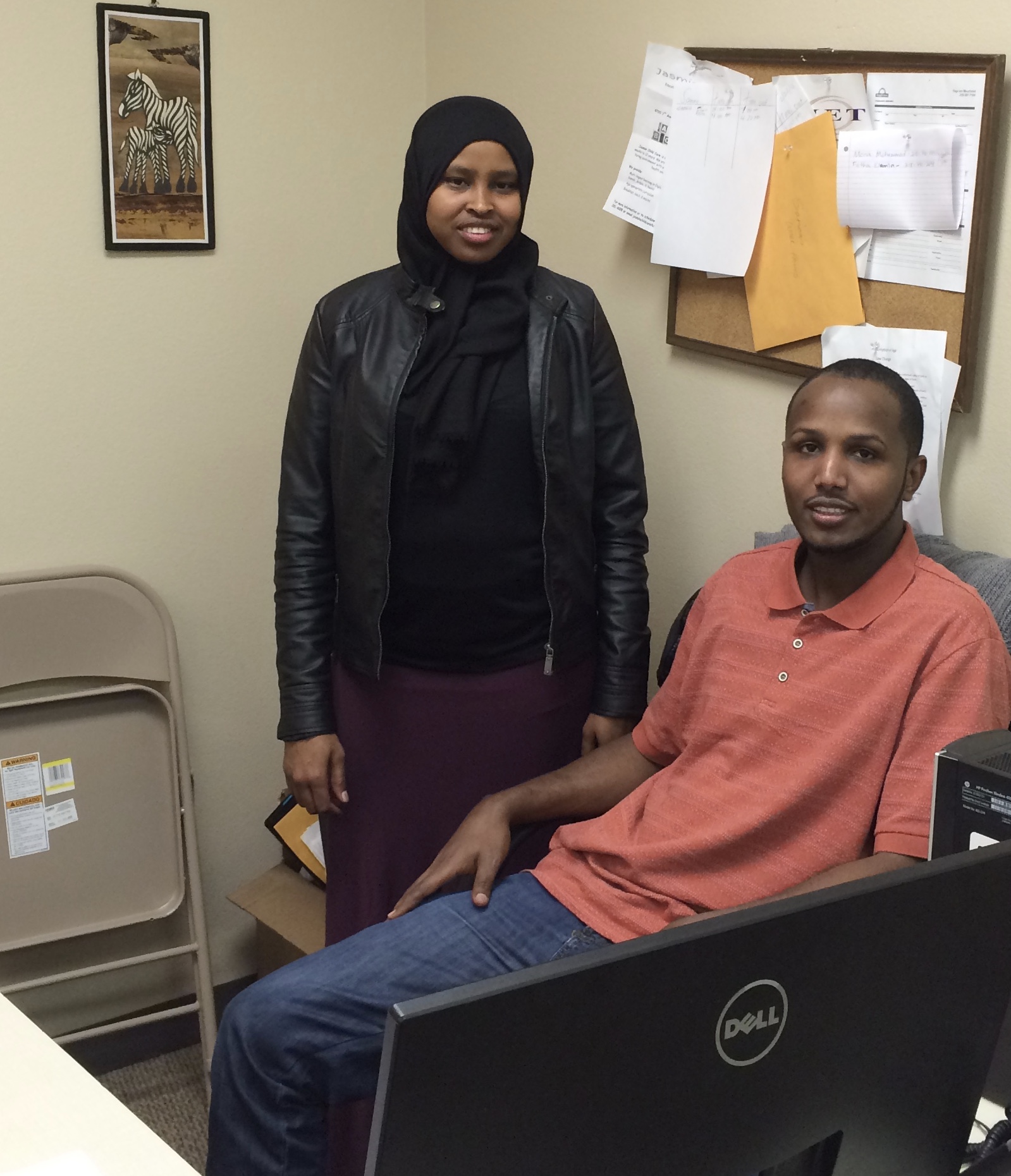 On Dec. 4, 2015, Chris Berg, host of KVLY’s “Point of View” had an intense discussion with two guests. Abdullahi is the Executive Director of the Afro American Development Association of Moorhead, Minn. Berg’s second guest was AADA’s program director Hamida Dakune.

Dakune and Abdullahi are seen as leaders in the local African New American community.

Berg said that the “community is scared” because of the influx of refugees in the region and the impact they have. KVLY raised questions and concerns about refugees and New Americans after a mentally ill man raped a woman at a Mapleton, N.D., convenience store.

Muslim refugees have been placed under extra scrutiny in KVLY’s coverage. In the case of the mentally ill man – Abdulrahman Ali, Valley News Live reported that he said, “Allahu Akbar” during the assault. This means “God is the greatest” in Arabic. It was later revealed that he said “Allahu Akbar” when police arrived and took him into custody. Ali has lived in the U.S. for four years.

In Berg’s roundtable, Dakune and Abdullahi stressed that this was a terrible act, but it was not an act of terrorism.

Some in the local Somalian community feel that KVLY presented this case, as well as Muslims in general, with links to terrorism.

At one point in Berg’s round table, Dakune asked Berg why he kept referencing ‘Allahu Akbar.’

“What is your point?” she asked.

The tension in the room kept building as Berg, Dakune, and Abdullahi talked over each other.

“I’m not going to sit here and have you – this is my show,” Berg said. “You will allow me to speak.”

Dakune and Abdullahi said that as representatives of their community they want to be able to share their side of the story.

“Stop spreading hatred to the community,” Abdullahi said during the roundtable. “We are one. We are united. Every time talking about refugees. We are tired of talking about this issue. Spreading hatred. How will this help you? It will not help you.”

Both Dakune and Abdullahi feel that the local news media are focusing on the wrong aspects of refugees. Instead of always focusing on the negative, they wish media would show success stories of New Americans in Fargo-Moorhead.

Dakune began feeling animosity from some in the community last year. Her hijab, or Muslim head covering, makes her easily identified with her faith. She continues to experience derogatory comments from others in the community.

“You are talking about community being scared,” she said during the television show round table. “I am scared, too. Everyday I’m attacked just because of the way I’m dressed… Don’t make the host community the only ones who are victimized here. I get threat every day. I am victimized every day just because of the way I dress. And still I want to live in this society.”

Dakune watches the news in order to know which areas of Fargo-Moorhead to avoid. If it is reported that tensions are high over Muslims and New Americans, she will avoid that area.

Dakune and Abdullahi are not alone in their anger over KVLY’s coverage of New Americans. Members of competing news organizations in Fargo-Moorhead voiced their frustrations with KVLY’s commentary.

One of the most notable responses came from Forum columnist Mike McFeely. He was quick to criticize KVLY’s coverage of the Mapleton rape case.

“It was sensational. It was juicy,” McFeely wrote. “It spread all over the Internet and got Valley News Live lots of publicity on nut-job websites.”

In McFeely’s “Valley News Live gets story wrong, fans Islamophobic flames,” he addressed those in the community who are afraid of Islam. He suggested that KVLY presented the story in that manner in order gain viewers and spread fear.

The Forum is owned by Forum Communications, which also owns WDAY – KVLY’s competitor.

Dakune and Abdullahi said that as representatives of their community they want to be able to share their side of the story.

Instead of “spreading hatred” Abdullahi and Dakune wish other aspects of New American life were covered in local news media. Some of what they wish media would cover happens within their own organization.

Some of this work is navigating cultural differences. AADA formed a council of elders – a custom many people of African backgrounds are familiar with – to bring complaints and legal concerns. This council of elders can then work as the go-between with the individual and local law enforcement.

Because law enforcement is corrupt in many of the countries refugees have fled from, refugees may have difficulties taking their problems to law enforcement in Fargo-Moorhead. However, they may feel more comfortable taking it to the council of elders first.

Because some fear law enforcement, AADA has also hosted police officers from the Moorhead Police Department. The officers give presentations and information to the New American community to gain their trust and show the differences between their department and corrupt agencies from people’s home countries.

Together with First Congregational Church of Moorhead, AADA participated in the FM One Community Unity March in December. New Americans and long time U.S. citizens marched across the Main Street bridge from Fargo to Moorhead urging the community to embrace all people. Signs read, “Together we are stronger” and “We are all one.”

These are the stories Dakune and Abdullahi wish to see in the news, but they feel that no one wants to hear them.

When their stories of refugee struggles and successes are competing with stories of anger and violence, it seems difficult to catch people’s attention.

Berg attributes part of the problem to what gains the interest of the American public in a 24-hour news cycle.

“You look at a lot of networks [that] have minute-by-minute viewership,” he said, “they’re going, ‘Hey, we talked about ISIS. We had a ton of viewers.’”

When a tamer story follows that piece, such as home improvement, the viewer loses interest. They change the channel and a consumer is lost.

“It’s the unfortunate part of this beast,” Berg said.

For those who oppose KVLY’s refugee coverage Berg said they should, “look at the poll.”

The poll conducted by the Mason-Dixon Polling and Research firm found that of the 625 people surveyed in Cass and Clay counties only 28 percent supported refugee resettlement while 57 percent responded that they oppose it. KVLY’s competitors are suspicious of those numbers.

Whether or not those numbers are factual, the 57 percent are the people AADA hopes to reach in their appearances on shows like “Point of View.”

Abdullahi and Dakune have seen many different opinions across social media and area news outlets.

While they do not always agree with Berg’s commentary or much of the dialogue on KVLY, they understand differing opinions and appreciate freedom of speech.

For Abdullahi, Berg is just doing his job.

“[Chris Berg] he’s is my friend,” Abdullahi said. “Several times he called me… We chat.”

“This is where I ‘m calling home”

It appears that he sincerely means it. Berg is his friend. Everyone in the community is a friend in Abdullahi’s eyes.

With his new friends and connections in the community, Abdullahi hopes to make connections to help other New Americans.

“Every day ten or twenty [people] will come to [AADA’s] office,” Abdullahi said. “They are just looking for a job.”

Through their work Abdullahi and Dakune hope that AADA can change the conversation about refugees in Fargo-Moorhead – a place many refugees hope to stay.

“When you go out to the refugees and ask them about, ‘How do you feel about Fargo-Moorhead?’” Abdullahi said, “99 percent will tell you, ‘This is where I’m calling home.’”