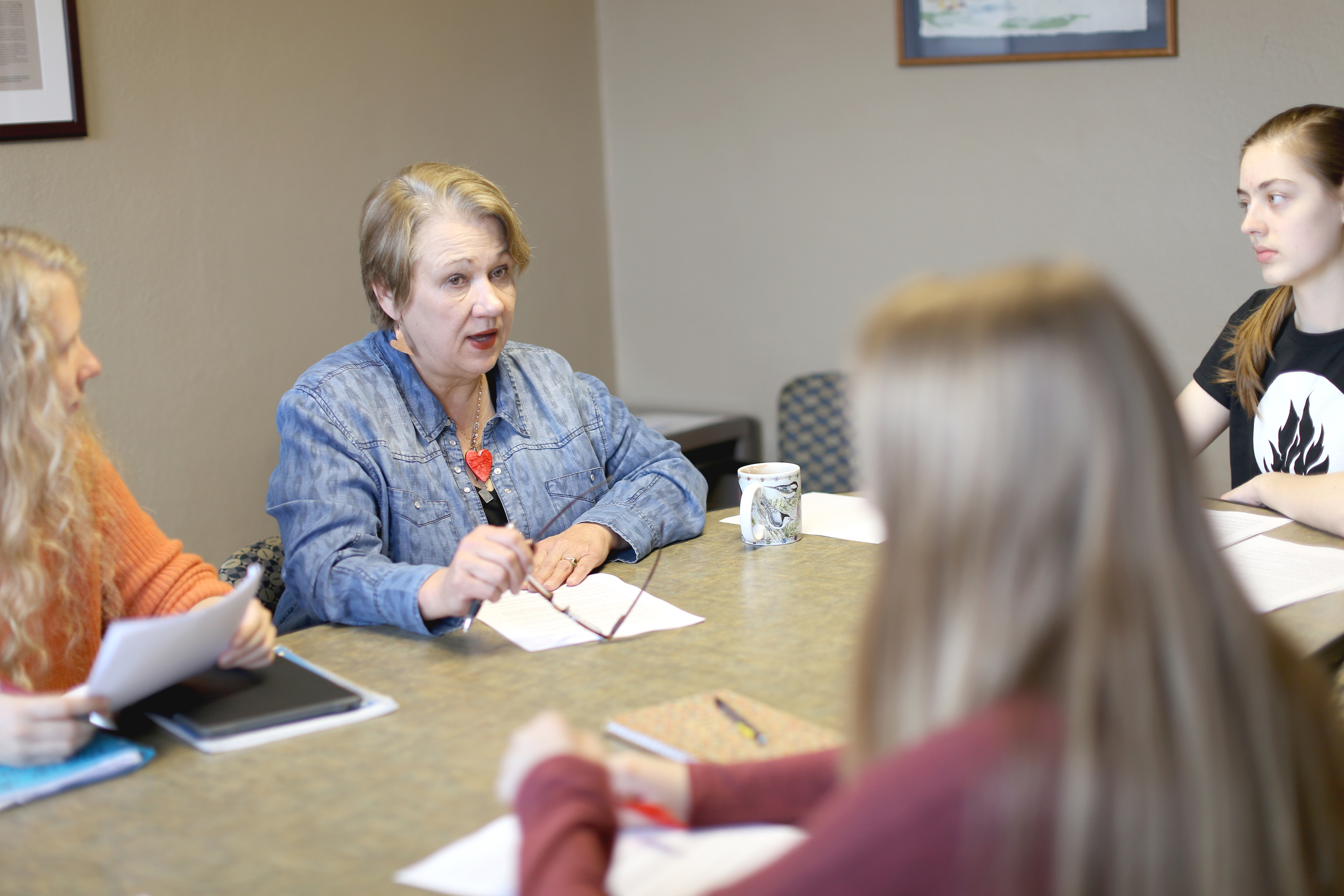 After 21 years of teaching journalism at Concordia, Catherine McMullen won’t be moving very far away.  Her new office in Academy will keeps its doors open as she continues to advise the staff of The Concordian, and work on writing projects of her own.

McMullen has discovered, inspired and mentored dozens of budding careers during her time as a professor. She got her own start in journalism around her childhood dinner table.

“My dad was a journalist. He loved journalism and … every day at dinner he’d tell stories,” she said. “So while I never thought I wanted to do that … I couldn’t do anything else. Maybe it was osmosis.”

McMullen’s father was a long-time photographer for the Fargo Forum.

“I realized that writing was my strongest talent,” she said. “It sure wasn’t math. It wasn’t science. It was writing.”

McMullen got her own start at The Forum and wrote there for 13 years. It was during that time that she was approached with a teaching offer.

At the time, Concordia’s journalism department consisted of the one class McMullen was teaching. She kept writing columns for The Forum during her first few years of teaching, until she was hired full-time at Concordia.

“[The class] was called: Journalism,” she chuckled. “I always called it ‘everything you wanted to know about journalism in one course.’”

“When I was cleaning out my desk drawers the other day, I came across lectures I had written in my first year of teaching. I was so unsure of myself … I actually wrote out my lectures word by word. How dreadful that must have been for the students. It’s not how we teach anymore.”

McMullen’s purpose in teaching has stayed the same over the years, despite her change in teaching style. She teaches students how to get a job.

“I thought about what got me my job at the Forum. It was a portfolio, and the portfolio came from the work I had done [at the school paper]. It seemed pretty practical. It seemed pretty obvious to me that a practical, hands-on approach … was essential.”

McMullen’s hands-on approach comes with a straightforward tone that is famous among English students at Concordia. Her mix of journalism experience and service in the military produced a no-nonsense policy in the classroom.

“Sometimes students will come in having been told that they’re pretty good writers and they probably are … then they get here and it hurts their feelings,” she said. “If you came here knowing how to do it all … you’d be teaching the class. I remember one time on a student evaluation, someone wrote that I need to tone down my personality. I didn’t even know what that meant or how to do it.”

Many of McMullen’s former students  have gone on to successful journalism careers all over the world. One of McMullen’s favorite parts of being a professor is seeing students develop as writers and people during their college years, she said.

“It’s really fun to see that kind of maturing,” she said. “That’s not so much because of great teaching. Sometimes students have corresponded with me later, years after they graduate, and tell me that they were off-put by my directness but they’ve come to appreciate it.”

“Often people are kind enough to keep in touch with what they’re doing. Some say things along the lines of, ‘You gave me my first F on a paper ever, and you know what, I deserved it!’”

McMullen’s colleague Scott Olsen asked former students and coworkers to email him their favorite memories of her classes, and share what McMullen means to them. A manilla envelope of several dozen emails now sits on her desk in her emptying office. Each email contains stories of former students who took her advice into the professional world.

“Fake it if you’re uncomfortable; then do more research and ask more questions,” she said.

“Each story you write, you’re connecting the dots. You may have done well on the last story you wrote but this is a new story and it presents its own challenges and frustrations. Skepticism is certainly necessary but not being cynical.”

McMullen was a year or two away from retirement when the early retirement plan was offered by the college, she said. Her husband teaches agriculture at NDSU and their schedules haven’t meshed in years, so she looks forward to him joining her in retirement come January. She has a few unfinished writing projects hanging over her head that she plans to get done, along with spending more time at the family cabin.

McMullen believes in her students, and will be missed dearly. Now as a former student, I can’t help but feel sorry for the journalism students to come that will never be mentored by her.

When asked how she managed to make such a deep impression on so many people, she simply said, “I don’t know. I’m not answering your question because it’s embarrassing.”