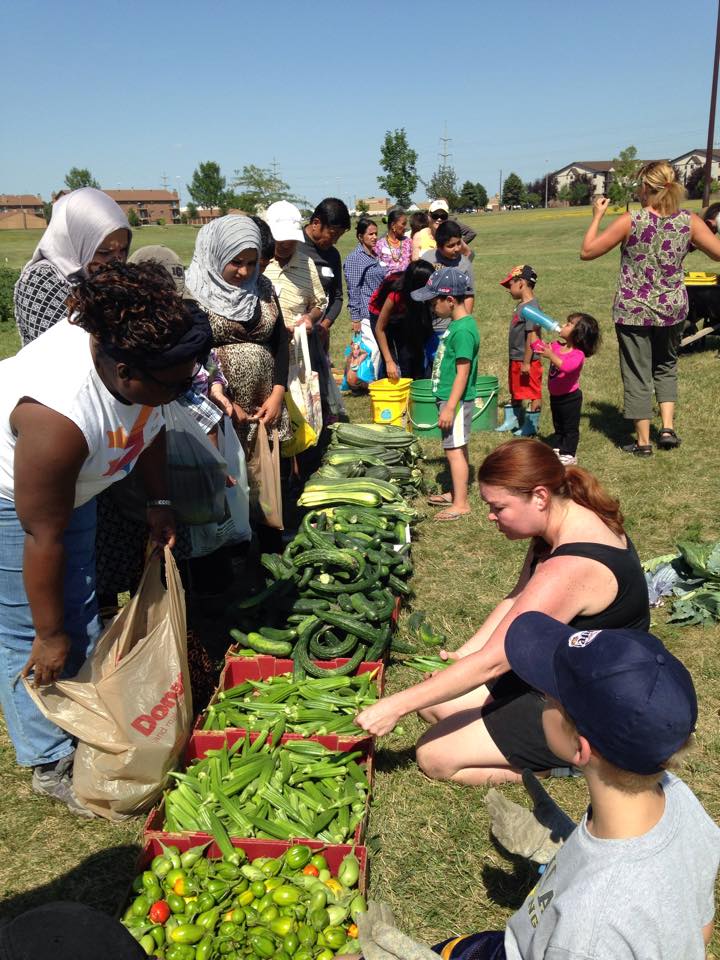 It’s early February, the ground is covered in sticky-wet snow and the streets are sloppy from a week of 40-degree temperatures. This weather is unseasonably warm for the majority of the Fargo-Moorhead population. But for New Americans Zainab Alsudani and Alyaa Luaibi, Fargo is still chilly and they long for the ground to thaw and the sun to come out of hiding so they can eat freshly gardened produce like tomatoes and zucchini.

Once spring hits, and planting season begins, the Growing Together Community Garden will open so New Americans like Alsudani and Luaibi, who are both from Iraq, can have a place to get fresh vegetables that they helped grow.

Luaibi said she enjoys taking her kids to the community gardens because they get to help and it gives them something to do. She also likes the “organic and good” food she receives from gardening such as cucumbers, tomatoes, and zucchini.

The Growing Together Gardens were created in 2006 in part by Nola Storm and Jack Wood as a mission of their local church, Olivet Lutheran of Fargo. Storm had experience working with refugees by sponsoring refugees through church, working as a school social worker with Fargo Public Schools, and as an ELL instructor at Agassiz Adult Learning Center.

The idea of the garden began when Storm got in contact with Wood and decided they needed to do something for the refugee families who they felt were so disconnected from the rest of the community. Their first instinct was to garden because Wood is a “tomato genius,” according to Storm.

“Our first mission is always to build a sense of community,” Storm said. “The food is just a fabulous byproduct.”

What started as one 6-by-6-foot plot at Community Homes (a subsidized apartment complex in South Fargo that houses many New Americans) with only five families, the Growing Together franchise has grown exponentially in the last 10 years. Now more than 120 families are with the Growing Together program with their hands in five gardens around the area.

The plots provide easy access to New Americans all across Fargo with locations at Community Homes, Lutheran Social Services, Rabanus Park, and another in south Fargo due to a partnership with Catalyst Medical Center, according to Storm.

The gardens provide an opportunity for refugees from many different countries and native community members to work together toward a common goal. Storm said with a chuckle that the interactions over the years have been interesting. Cultural and language differences are two of the reasons interactions at the gardens can be difficult.

“It’s hard to be from another language and figure out how to forge new relationships,” Storm said.

Storm told a story about a man from Liberia who wasn’t able to learn people’s names very well. When asked why, he said of native community members, “you guys all look alike.”

In order to help break these language barriers, the Growing Together organizers split the volunteers and New American families up in to teams, so that they get a chance to interact with each other while keeping busy doing garden work. Even though they don’t speak the same language, being able to plant tomatoes as a team brings them together as neighbors, Storm said.

Despite those language barriers, Luaibi and Alsudani have been able to get more than just fresh produce from Growing Together.

“Yes, for me it’s helped meet different people,” Luaibi said. “I feel good. The gardens have helped me and my friend Zainab.”

At the gardens they have met other people from Iraq, Bhutan, Liberia, and even quite a few Americans.

Luaibi and Alsudani came to the U.S from Iraq in November 2013 with their husbands and children. They both said winter is still hard for them, and going to the gardens in the summer is a great opportunity. They started going to the community gardens in June of last year every Tuesday after they finished their classes at the Adult Learning Center.

Most of the refugees face the same adjustment problems. Storm described that often times their neighbors don’t talk to them, and when it is as cold as it is in the winter, many New Americans choose to stay in the warmth of their apartment.

“The garden gives New American families a sense of belonging, a place to go that means something, a way to practice what they know and English, and use their skills,” she said.

Storm tells a story about the big difference the gardens can make in the lives of New Americans. Several years ago, before the Growing Together garden was established at Community Homes, a Bhutanese family moved into an apartment there. The son told Storm that his father, who had been a farmer in his native country, saw a small lot behind the apartments and said: “Get me an ox. See that land?  I can get a farm.” The father became depressed when he found out he couldn’t do what he loved. But later, his family had gone to Wood’s house to help seed his garden. Storm said the Bhutanese man got a smile on his face, and said “I’m finally happy” because he was able to use his farming skills. That’s what growing together is about, Storm said.

The gardens take a lot of work. All of the organizers go to each garden once a week to check on the crops. They also meet year round with their members to keep the involvement going. Recently, they even had a holiday party.

Because the summer is short and the program is so large, all the work for the week on one garden must be done in a day. Volunteers and New Americans come to the garden to weed, water, seed and other important work.

When the gardens first started, volunteers and New Americans would do the work, and then serve a huge meal to all those who helped. Now that the members of the gardens are as plentiful as their tomatoes, they have PBJ’s and salads. Sometimes, New American families will even bring traditional dishes to share.

As far as distributing the harvests go, Growing Together has had to adjust their system for the numbers. Storm said after all the veggies are picked distribution lines are created for the produce to be collected by each family, who receives a bag and container for their share. The amount of produce each family receives depends on the amount of hours they put in to the garden work, to make it fair across the board.

Sometimes, even the simplest of activities like collecting the vegetables they helped plant can bring back hurtful memories from the refugee camps. Storm said when they first started using the distribution lines it made some of the New Americans anxious due to memories of having to collect rations in the camps. Storm, Wood, and the rest of the Growing Together Team had to adjust to these reactions, and most of the refugees understood that everyone is getting their share of the plot.

With a deep breath and tears forming in her eyes, Storm describes her favorite part of working with New Americans at Growing Together “They have so much resilience,” she said. “It has strengthened my faith that the human spirit can rise above the terrible things and be grateful for the little things.

“Refugees love this country and are so thankful to be here – they want to meet their neighbors – they want the same things we do,” she said. “I am so grateful, and amazed of these people every day.”

Below are addresses for each of the four main Growing Together Community Gardens: