By: Karis Baerenwald
In: People, Variety
With: 0 Comments 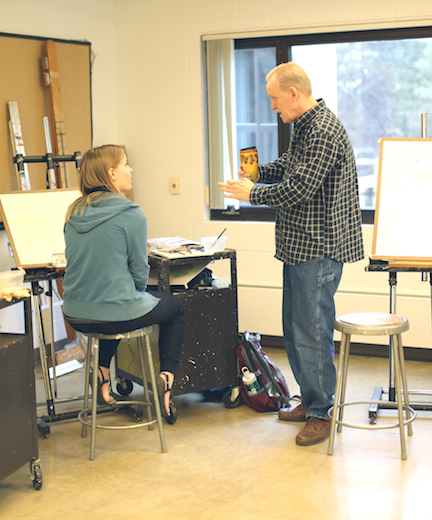 David Boggs walked into his watercolor class with tea in hand, humming.

“One week,” he said, grinning. “One week left people.”

Boggs, professor of painting, is “looking forward to retirement on a daily basis” and he makes sure to let his students know.

After 31 years of teaching at Concordia, Boggs is finishing up his last semester.

The main thing he will miss is working with students.

“My wife and daughter are so sure that I’ll miss that that they say, ‘Nope you’ll be teaching before a few years are out. You’ll be doing something.’ And I don’t know if that’s true … but we’ll see.”

His wife, Pat Bastion, executive assistant to dean of the college, said she really does think he will miss teaching more than he thinks he will.

“I’ve noticed like when he’s not teaching in the summers and I work all day and I come home and it’s like ‘Babababababah’” Bastion said, laughing. “Because he’s had no one to talk to.”

“When he’s been on a sabbatical for a semester you can tell, because he hasn’t had that interaction with students,” Boggs-Johnson said.

Though Boggs has spent half his life teaching at Concordia, he did not originally plan to be a teacher. He planned to just focus on getting good at his craft, but in graduate school he had to teach as part of his assistantship and found he was good at it.

Boggs said he’s enjoyed teaching at Concordia; Boggs-Johnson said teaching is just who he is and more a lifestyle than anything else.

“He gets very invested in people and wants people to succeed and has a really big heart. And so I think that’ll be a really big adjustment for him to not have that anymore, especially because he has been such a big mentor for a lot of people,” Boggs-Johnson said.

She said Boggs identifies people’s talents and passions and forces students to think about what they really want to do with their lives.

“He’s had students who say ‘Well I’m going pre-med or I’m going to do this because I can make money’ and if he sees that there’s a genuine talent and passion for art then I know he’s pushed that student to question if the money route is really what they should do or if they need to be pursuing what they’re really passionate about.”

Boggs encourages students to realize their potential and own what they are amazing at, according to Boggs-Johnson.

“He wants people to be bold and make a mark. And he’s not afraid to tell you he’s really good at something and he doesn’t want anyone else to be if they are too.”

His motivation overall has helped students become more confident and find their paths in life.

Senior painting students Tayler Klimek and Brenna Frost can attest to this.

Frost said when she wanted to keep painting even though she couldn’t take the class again, he found a way to make it work.

“He is always enthusiastic and supportive of what I want to do with my paintings, or anything else for that matter,” Frost said in an email.

One thing Boggs focuses on with his students is integrating technology into his classes to get students comfortable using technology that they might not otherwise practice.

“I’m trying to integrate more contemporary media than the old-school ink and paper and charcoal,” he said.

In his 2D Foundations class, half of the projects use Adobe Photoshop and in his Beginning Drawing class, students draw digitally for half of the semester. Boggs thinks giving students the chance to work with this technology will help them prepare for jobs in which they will need to be able to use similar technology.

“Nowadays, every student should graduate with a modicum of visual literacy,” he said.

During his time at Concordia, Boggs also started up a graphic design major here about 8 years ago.

“That is where people go for careers,” Boggs said. “Half of our [art] majors now are graphic design.”

Bastion said Boggs always knows what the up-and-coming thing is and when he came here, he along with a couple others, played a key role in increasing enrollment in the art department with his energy.

His graphic design is self-taught, Bastion said. His expertise is in painting, which he went to graduate school for at University of Illinois. Boggs said he really enjoys watercolor.

“Oh there’s something about those translucent colors building up on that wonderful paper, you know that professionally prepared surface. Oh my.”

Watercolor is what art teachers will probably be asked to use in schools. A lot of illustrators also use watercolor, so it’s a good experience to have, Boggs said.

Boggs said he gained a varied range of experience over the years, which is ideal for teaching at a liberal arts college.

It’s going to be hard for Concordia to find someone that can do everything Boggs can do because a lot of painters aren’t good at technology and vice versa. It will be an adjustment for the art department, Bastion said.

“Just losing his vitality and his energy over in that department — it’s really going to be a loss.”

Boggs said that as far as he knows, Concordia is hiring a photography professor, not a painting professor. Painting will be taught next fall by an adjunct teacher who has an MFA in painting.

Boggs-Johnson thinks Boggs will keep interacting with students he has grown close to.

“I think students have really been his life for the past 30-plus years. And I think that’ll continue just in a different way.”

Back in the painting studio, while making his teaching rounds, Boggs noticed one student hunched over her easel, pencil in hand, still focused on the drawing phase.